Fast radio bursts (FRBs) are brief radio emissions from distant astronomical sources. Some are known to repeat, but most are single bursts, occurring only as a single flash of detectable energy. In 2017, astronomers pinpointed the location of the repeating FRB 121102 and reported that it was in a star-forming region of a dwarf galaxy more than 3 billion light-years from Earth. Now, astronomers using CSIRO’s Australian Square Kilometre Array Pathfinder (ASKAP) have determined the precise location of the single, transient radio pulse dubbed FRB 180924. 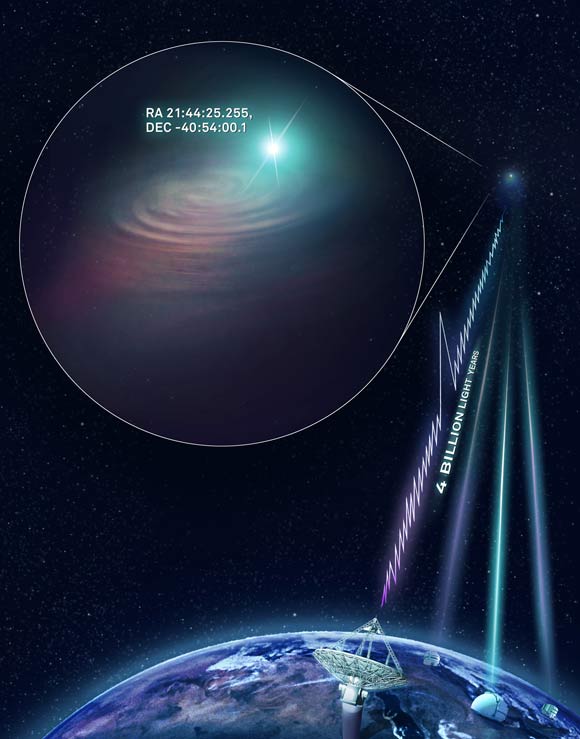 An artist’s impression of ASKAP finding a fast radio burst and determining its precise location. The Keck, VLT and Gemini South optical telescopes joined ASKAP with follow-up observations to image the host galaxy. Image credit: Andrew Howells / CSIRO.
Short blasts of radio energy from powerful, yet currently unknown, astrophysical processes travel far and wide across vast intergalactic expanses.
Upon reaching Earth, FRBs — which often last no longer than a few milliseconds — are mere electromagnetic whispers that require sensitive radio telescopes to detect.
Although these bursts are known to have extragalactic origins, the host galaxies from which they were emitted remain mysterious, largely due to difficulties in precisely locating the radio emission. 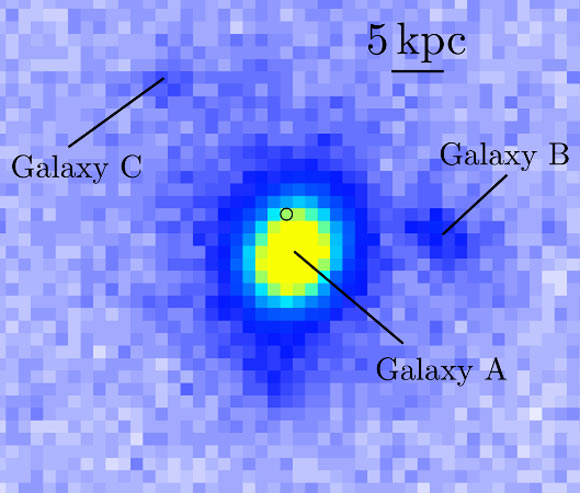 This VLT image shows DES J214425.25-405400.81, the host galaxy of FRB 180924. Image credit: Bannister et al, doi: 10.1126/science.aaw5903.
FRB 180924 was spotted in September 2018 during a dedicated search for FRBs using ASKAP, a 36-antenna array of radio telescopes working together as a single instrument in Western Australia.
The astronomers used the miniscule differences in the amount of time it takes for the light to reach different antennas in the array to zoom in on the host galaxy’s location.
They made a high-resolution map showing that the burst originated in the outskirts of DES J214425.25-405400.81, a Milky Way-sized lenticular or early-type spiral galaxy about 3.6 billion light-years away.
“From tiny time differences — just a fraction of a billionth of a second — we identified the burst’s home galaxy and even its exact starting point, 13,000 light-years out from the galaxy’s center in the galactic suburbs,” said Dr. Adam Deller, an astronomer at Swinburne University of Technology.
“If we were to stand on the Moon and look down at the Earth with this precision, we would be able to tell not only which city the burst came from, but which postcode — and even which city block,” said Dr. Keith Bannister, of CSIRO.
To find out more about DES J214425.25-405400.81, the team imaged it with ESO’s Very Large Telescope and measured its distance with the Keck telescope in Hawai’i and the Gemini South telescope in Chile.
“FRB 180924’s parent galaxy looks nothing like the repeating FRB 121102 and its host,” Dr. Deller said.
“It comes from a massive galaxy that is forming relatively few stars. This suggests that FRBs can be produced in a variety of environments, or that the seemingly one-off bursts detected so far by ASKAP are generated by a different mechanism to the repeater.”
“These bursts are altered by the matter they encounter in space,” said Dr. Jean-Pierre Macquart, from Curtin University node of the International Centre for Radio Astronomy Research (ICRAR).
“Now we can pinpoint where they come from, we can use them to measure the amount of matter in intergalactic space.”
The team’s work was published in the journal Science.
_____
K.W. Bannister et al. A single fast radio burst localized to a massive galaxy at cosmological distance. Science, published online June 27, 2019; doi: 10.1126/science.aaw5903