Archaeologists from the Israel Antiquities Authority (IAA) have uncovered the remains of a large Neolithic-period settlement near the modern town of Motza, about 3 miles (5 km) west from Jerusalem. 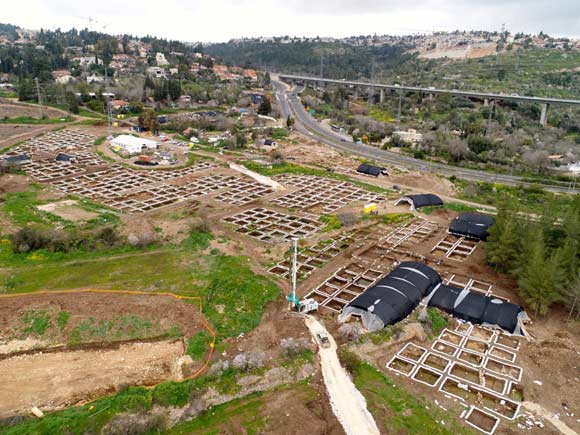 An aerial view of the Neolithic-period settlement near Motza, Israel. Image credit: Eyal Marco, Israel Antiquities Authority.
“This is the first time that such a large-scale settlement from the Neolithic period is discovered in Israel,” said IAA archaeologists Hamoudi Khalaily and Jacob Vardi.
“At least 2,000-3,000 residents lived here — an order of magnitude that parallels a present-day city.”
The researchers unearthed a number of large buildings, including rooms that were used for living, as well as public facilities and places of ritual.
“Between the buildings, alleys were exposed, bearing evidence of the settlement’s advanced level of planning,” they said.
“In the buildings, plaster was sometimes used for creating floors and for sealing various facilities.”

The scientists found numerous storage sheds for legumes, especially lentils.
“The fact that the seeds were preserved is astonishing in the light of the site’s age. This finding is evidence of an intensive practice of agriculture,” they noted.
“Moreover, one can conclude form it that the Neolithic Revolution reached its summit at that point: animal bones found at the site show that the settlement’s residents became increasingly specialized in sheep-keeping, while the use of hunting for survival gradually decreased.”
The team also unearthed thousands of arrowheads, axes, sickle blades, knives and hand-made stone bracelets.
“We also found carefully crafted alabaster beads, as well as medallions and bracelets made of mother of pearl,” the archaeologists said.
“So far, it was believed that the Judea area was empty, and that sites of this size existed only on the other bank of the Jordan river, or at the Northern Levant,” they added.
“Instead of an uninhabited area from that period, we found a complex site, where varied economic means of subsistence existed, and all this only several dozens of inches below the surface.”
“All findings were recorded using an innovative 3D technology, so that we can continue to research the site at the end of the excavation as well.”