OUT OF MIND » TRUTH IN CONSPIRACY THEORIES? » HISTORIES MYSTERIES » How Humans Migrated Across the Globe

How Humans Migrated Across the Globe 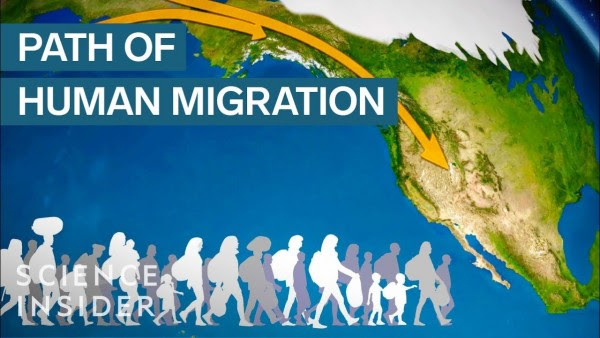 How Humans Migrated Across the Globe


There has been so much talk of racism recently that I thought this would be an interesting video to run today. It follows the footsteps of the earliest humans out of Africa, where humanity arose, departing in several waves to populate the four corners of the Earth. This animation merges data gathered from modern DNA studies and confirmed by studies of ancient DNA recovered from archeological sites across the globe.
DNA or deoxyribonucleic acid is a molecule composed of two chains of hydrogen, oxygen, nitrogen, carbon and phosporous that coil around each other. The main building blocks of DNA are the four nitrogen-containing nucleobases: (cytosine [C], guanine [G], adenine [A] or thymine [T]), a sugar called deoxyribose, and a phosphate group. A DNA sequence refers to the order of these four nucleobases. A DNA sequence is raw data that is easily digitized and which also reveals information about the time spans involved between mutations.
As humanity spread across the globe over the millennia and adapted to different environments, DNA mutations arose, sequences became altered, populations became isolated by glaciers and bottlenecked by natural disasters, including major asteroid impacts, resulting in the variety of human phenotypes we see today.
With the computing power we now have, it’s a fairly straightfoward matter of data management to track the changes that have occurred to the DNA sequences and to deduce the associated physiological traits affected, such that scientists are now able to create physical reconstructions of ancient humans, predicting skin and eye color, hair texture, facial and bodily traits, etc., based on DNA extracted from the molars of fossilized skeletons.
As consumers of home DNA tests know, the percentage of shared sequences you share with someone else is a function of how closely-related you are to each other. It’s easy, from DNA data, alone to predict the degree of kinship between individuals, as well as their ethnicity, based on shared segments of DNA code corresponding to data collected by these companies in their databases.
The dates used in this animation, which are the most accepted by paleontologists do not reflect some anomalous findings referred to in previous posts made here. For example, this animation shows Homo sapiens arising in East Africa 200,000 years ago and the first wave of humans moving out of Africa, crossing the Arabian Peninsula, into Southern India and Southeast Asia, across a land bridge that existed then to arrive in Australia 50,000 years ago.
These dates don’t jibe with the discovery of human fossils in Southern California dated to be 130,000 years old, as discussed in Graham Hancock’s latest book, ‘America Before’.
Over the past two centuries, the findings of paleontology have repeatedly pushed back the previously held dates for humanity’s inception and this process hasn’t stopped. As Hancock is fond of saying, “Stuff keeps getting older!”
Without getting hung up too much on the specific dates, this animation is a faithful representation of what scientists know about the various waves of migration that correspond to the founding populations of Africa, Europe, Asia and the Americas, from decades of field studies in conjunction with the data management technologies of DNA sequencing.

OUT OF MIND » TRUTH IN CONSPIRACY THEORIES? » HISTORIES MYSTERIES » How Humans Migrated Across the Globe

» Dalai Lama: Stop praying for Paris — humans created this problem and humans must solve it
» Dr. Steven Greer : Humans Abducting Humans
»  INTEL NOW:"MID TERM ELECTIONS MAY BE CANCELLED AND MIGRATED INTO REPUBLIC ELECTIONS 6 MONTHS FROM NOW"
» Arrests Ongoing Across the Globe
» Ten Archaeological Enigmas from Across the Globe