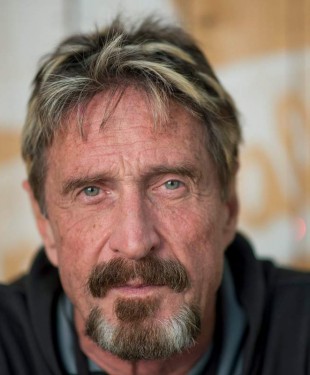 Recently a number of news sources are saying that John McAfee has been arrested. Days before the apparent arrest John McAfee posted a number of tweets in which he said that the Central Intelligence Agency were after him. In June John McAfee stated that if he was arrested or went missing that he would release 31 terabytes worth of files that would expose government officials. Since 22 July 2019 John McAfee has not been seen. I go into this and a number of other things in this video.

Re: UPDATE - John McAfee missing & the 31 terabyte deadman’s switch - John McAfee released after being detained in the Dominican Republic Fri Jul 26, 2019 12:40 am

McAfee’s presidential campaign manager, Rob Benedicto Pacifico Juan Maria Loggia-Ramirez, had tweeted on Tuesday that McAfee had been detained by authorities.
JOHN MCAFEE IS RUNNING FROM U.S. AUTHORITIES – AND RUNNING FOR PRESIDENT. ON A BOAT.
“I last spoke with John as his boat was being boarded. The situation was tense but controlled. Our conversation was cut short by authorities confiscating their phones. The bastards wouldn't even give him a cigarette,” Loggia-Ramirez tweeted.

(2/4) I last spoke with John as his boat was being boarded. The situation was tense but controlled. Our conversation was cut short by authorities confiscating their phones. The bastards wouldn't even give him a cigarette.

McAfee and his companions were suspected of traveling on a yacht carrying high-caliber weapons, ammunition and military-style gear, officials said.
The arrest took place while McAfee’s yacht was docked in Puerto Plata, a province on the Dominican Republic’s Atlantic north coast.
JOHN MCAFEE POSTS BIZARRE TWEET, SAYS HIS ENEMIES ARE TRYING TO KILL HIM
“Leaving detention…I was well treated. My superiors were friendly and helpful,” McAfee wrote in a tweet Wednesday, adding “in spite of the helpful circumstances, we've decided to move on.”

Leaving detention (don't judge my looks - four days of confinement). I was well treated. My superiors were friendly and helpful. In spite of the helpful circumstances, we've decided to move on. More later. 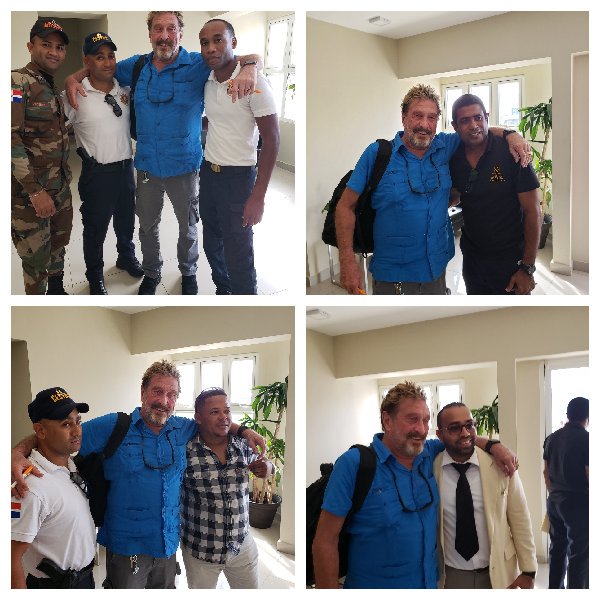 This isn't his first run-in with authorities. The antivirus pioneer’s troubles began in 2012 after Belize police stated he was “a person of interest” in connection with the murder of a neighbor, which he denies. McAfee at one time resided in Belize.
Earlier this year, he fled U.S. authorities on his yacht for not paying taxes. “I have not paid taxes for eight years,” he said at the time.
THE HUNT FOR JOHN MCAFEE
LOTS OF GUNS
McAfee tweeted a photo earlier in the week where he is holding a gun.

In 2015, McAfee was arrested in Tennessee for DUI and gun charges, according to a report. He was charged with DUI and possession of a firearm while intoxicated, according to the Henderson County Sheriff’s Department cited in the report.
PRESIDENTIAL CAMPAIGN
McAfee launched a 2020 presidential campaign in 2018, though he subsequently had to flee the U.S. The platform says in part that “our two party system…fluctuates between two extremes - each extreme annulling any progress made by the opposition in the prior administration.”
JOHN MCAFEE CALLS TAXES 'ILLEGAL,' SAYS IT'S BEEN 8 YEARS SINCE HE FILED A RETURN
But he also says that a big part of the campaign is centered around Cryptocurrency.
“A major focus of the 2020 campaign will be on cryptocurrency. We believe that cryptocurrency offers a unique historical opportunity to the individual – a chance to liberate one’s self, without violence, and to become more free,” according to the campaign’s website.