By Chelsea Gohd a day ago Spaceflight

The settlement, made in 2014, has come to light following the Apollo 11 anniversary. 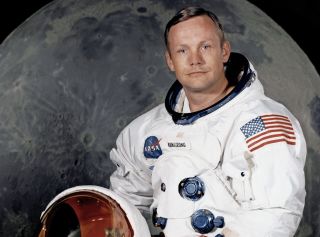 A Cincinnati hospital paid Neil Armstrong's family $6 million in a wrongful-death settlement after the astronaut and Apollo moonwalker died due to complications following a cardiovascular procedure, according to a new report from The New York Times.
When Armstrong died in 2012 at age 82, the world stopped to remember his legacy and the history he made as the commander of NASA's Apollo 11 mission. But following the 50th anniversary of Armstrong's famous first steps on the moon, the circumstances surrounding his passing have come to light.
In 2014, the hospital, Mercy Health — Fairfield Hospital, secretly paid Armstrong's family $6 million, according to The New York Times. The Times' report not only makes the settlement public but confirms that Armstrong's family was paid as a part of a wrongful-death-and-survivor claim.
Related: Neil Armstrong, 1st Moonwalker, Buried at Sea (Photos)

Since Armstrong's death, his sons have asserted that health care professionals' incompetence after the astronaut's coronary bypass surgery at this hospital led to his death. The Times' report cites an expert at the hospital who took serious issue with the treatment Armstrong received.
While Carol Armstrong, his second wife, described her husband as "amazingly resilient" following his surgery, severe complications quickly followed. When nurses tried to remove the wires for Armstrong's temporary pacemaker, he began to bleed internally, and his blood pressure plummeted, according to the Times. Further complications followed until, on Aug. 25, 2012, Armstrong was pronounced dead. Armstrong was buried at sea a couple of weeks later, on Sept. 14 of that year.
According to the Times, the 2014 secret settlement was sparked by a scathing email that Wendy Armstrong, who is both a lawyer and the wife of Neil Armstrong's son Mark, sent to the hospital's legal team. Wendy stated that, unless the hospital were to reach a settlement with the family, Armstrong's sons would go public with information about the hospital's role in his death.

The Times learned of and confirmed the details of this settlement when an anonymous source mailed the newspaper 93 pages of documents regarding the legal case and Armstrong's treatment at the hospital. The Times confirmed the authenticity of the documents, some of which are publicly available.
Fearful that the settlement might come to light someday, hospital representatives added a number of legal caveats to the settlement agreement. As the Times reported, Bertha G. Helmick, who represented Armstrong's grandchildren in the 2014 case, noted that if the entire settlement were ever made public, the funds could be ripped away from his grandchildren. (The Times does not have access to the entire settlement, and some of it has not been made public.)
The settlement agreement also refers to Armstrong as Ned Anderson, a pseudonym. "No institution wants to be remotely associated with the death of one of America's greatest heroes, Helmick said, as reported by the Times.
Although Wendy Armstrong asked the hospital for $7 million, the bulk of the $6 million settlement, $5.2 million, was split among the family members except Carol Armstrong. "I wasn't part of it. I want that for the record," she said, according to the Times. The family has signed nondisclosure agreements, so they cannot comment on the settlement or its recent resurfacing.