FALSE FLAGS? - 7 Questions that Challange the Official Narrative About the El Paso Wal-Mart Shooting plus more

FALSE FLAGS? - 7 Questions that Challange the Official Narrative About the El Paso Wal-Mart Shooting plus more Tue Aug 06, 2019 8:45 am


The official news narrative about the El Paso WalMart mass shooting is largely fabricated. Even though the violence was real, and people were really shot and killed, the narrative surrounding the tragedy is almost all fiction.

Seven huge questions are screaming out for real answers:

#1) If there’s only one shooter, why did so many eyewitnesses report multiple shooters at the scene?

#2) Why did the local police arrest and hold three suspects in custody, as was widely reported by the media before the story was changed to a “lone shooter?”

#3) Why does the so-called “manifesto” appear to be written by someone far older than 21 years of age?

Answer: The manifesto is a hoax. It was not written by the individual who was arrested as the shooter.

#4) How does one man kill 20 people and wound another 30 people with a single magazine that only holds 30 rounds? The surveillance photo shows no chest rig, no battle belt and no spare magazines.

#5) If the shooter is on a suicide mission, why does he bother to wear both eye protection and ear protection?

Answer: Because he knows he will survive his “mission” and be taken into custody after surrendering to police. It wasn’t a suicide mission at all. Eighteen months from now, the world will have forgotten the name of the shooter, and the media will never report anything about him again.

(He will likely be relocated under the witness protection program, living under a new identity after having completed his “mission” for the deep state.)

#7) Why was the shooter’s online profile changed from “Democrat” to Republican / Trump supporter / QAnon follower?

Clearly the deep state is modifying his online profile to match their own conspiracy theories and official narratives about QAnon followers being “domestic terrorists.” This is Orwellian-level psyop stuff being run on the entire nation…

In summary, the official narrative doesn’t add up. In fact, it’s all a “staged violence” event which combines real violence with a fake narrative to achieve a specific political purpose.

In this case, the goal is the complete disarmament of the American people, blaming Trump for everything and positioning illegals as “victims” of a mass shooting when, in reality, it was Americans who were actually shot.

Re: FALSE FLAGS? - 7 Questions that Challange the Official Narrative About the El Paso Wal-Mart Shooting plus more Tue Aug 06, 2019 9:17 am

Admin
Posts : 107486
Join date : 2012-01-04
Location : Woodstock Nation
from MrCati:
The El Paso and Dayton Ohio Observation and Discussion
VIDEO:
This report shows and discusses the observed code found in both the El Paso shooting event of 08-03-19 and the Dayton Ohio shooting event of 08-04-19. Findings will show a merging of old numbers with the new numbers to create a new set of numbers that will be shown and discussed.
Background Sources and Links: El Paso Shooting https://www.cbsnews.com/news/el-paso-…
https://www.bbc.com/news/world-us-can…
Dayton Ohio Shooting https://www.washingtonpost.com/gdpr-c…
https://www.nytimes.com/2019/08/04/us…

Re: FALSE FLAGS? - 7 Questions that Challange the Official Narrative About the El Paso Wal-Mart Shooting plus more Tue Aug 06, 2019 9:19 am Source: Jim Hoft
What a kook.
Beto O’Rourke started laughing today when asked about the horrific mass shooting in his hometown of El Paso.
It was the seventh deadliest shooting in US history.

Re: FALSE FLAGS? - 7 Questions that Challange the Official Narrative About the El Paso Wal-Mart Shooting plus more Tue Aug 06, 2019 10:00 am 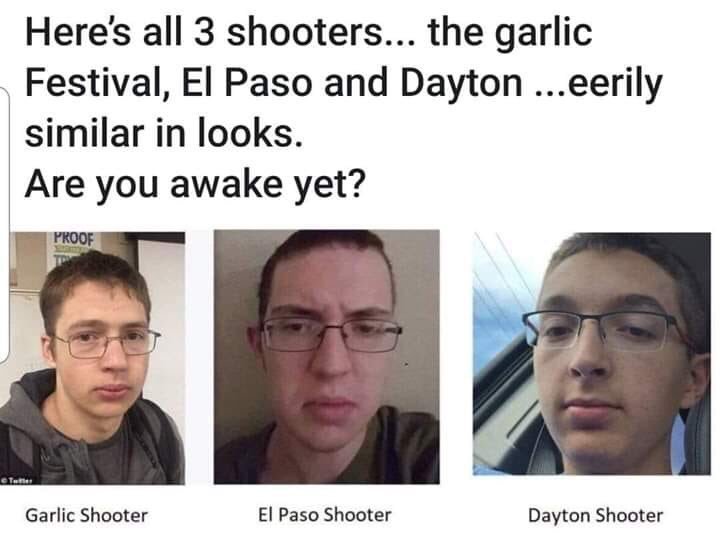