Anarchy Along The Jersey Shore And On Long Island In The Aftermath Of Hurricane Sandy Fri Nov 02, 2012 9:22 pm

Friday, November 2, 2012
Anarchy Along The Jersey Shore And On Long Island In The Aftermath Of Hurricane Sandy 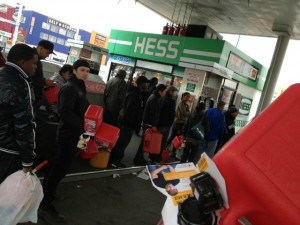 Hurricane Sandy is another reminder of just how incredibly fragile the
thin veneer of civilization that we all take for granted on a daily
basis really is. Many of the hardest hit areas along the Jersey shore
and the coast of Long Island have descended into a state of anarchy.
More than 7 million people live on Long Island, and millions more live
along the Jersey shore and right now they are getting a taste of what
life would be like during a total economic meltdown.

At the moment, there are still approximately 4.7 million
homes and businesses that do not have power. Officials say that some
of those homes and businesses may not have their power restored until the weekend of November 10th and 11th.
Meanwhile, it is getting very cold at night. This weekend the low
temperatures on Long Island are supposed to dip into the upper
thirties.

There have been reports of people diving into dumpsters
behind supermarkets in a desperate search for food, and there have
been other reports of roaming gangs of criminals posing as officials
from FEMA or Con Edison and then robbing families at gunpoint once they
have gained entrance into their homes. If people will behave like
this during a temporary emergency that lasts only a few days, what
would they do during a total economic collapse? That is a frightening
thing to think about.

It is being reported that some people are waiting in line for hours for gasoline in some areas and that state troopers have actually been deployed at every gas station along the New Jersey Turnpike and the Garden State Parkway.

The following is how one New Jersey mayor described the situation...

'Gas lines are stretching for a couple of miles,' said Anthony
Ammiano, mayor of Freehold, N.J., who recalled the oil crisis of the
1970s. 'It's like the Jimmy Carter years. It's a flashback of bad
memories.'

There have even been reports of people literally fighting each other over gasoline...

'It’s so crazy. Cars are pulling up and people are fighting each
other. There is no gas around here,' said Mena Aziz, who manages a Gulf
Express station in Bay Ridge, Brooklyn. 'It’s been so busy.'

According to Breitbart,
there have been continuous reports of "fistfights and people bringing
guns to gas stations" on Twitter. The following are a couple of
examples...

You know things are bad when you ask the gas station attendent 'when do
you think you're going to get more gas?' and he just laughs at you.
— Prede (@predederva) November 1, 2012

Unfortunately, authorities are projecting that the gas shortage may last for another week at least.

How angry and frustrated will people get by that time?

There are vast stretches of the Jersey Shore and the coast of Long
Island that will never be the same again. The following is an excerpt
from a comment that a reader of mine from Long Island left on one of my recent articles...

I live in Massapequa NY …..No power to 95%. almost every home south
of Merrick Road ( 1.5 miles from open water ) has been flooded. No
electricity, no supermarkets in immediate area, no gas (approx 80% of
gas stations closed on Long Island).

This was not just another storm. It was a life-altering event for millions of people.

Unfortunately, just as we have seen after every other major storm in
recent years, looters are taking advantage of the chaos caused by
Hurricane Sandy.

According to the New York Post, a number of arrests for looting have already been made on Long Island...

In the Rockaways, lowlifes were sneaking into clothing stores and
cleaning out pizzerias. Two men and a woman were arrested for robbing a
BP gas station on Beach Channel Drive, three men and one woman were
cuffed for pillaging a Radio Shack on Beach 88th Street, and two people
were arrested for raiding a clothing store near Beach 86th Street,
cops said. Stores were emptied along a two-block stretch of Mermaid
Avenue in Coney Island. Seven people were busted.

Over on Coney Island, looting appeared to be out of control during the immediate aftermath of the storm...

Thieves broke in to the badly damaged Mega Aid Pharmacy on Mermaid
Avenue and reportedly stole more than 10,000 pharmaceutical items,
including prescription drugs.
'The water went away and these people started walking down the
streets and just robbed stores,' a pharmacy worker told HuffPo's Andy
Campbell.

'People are turning on each other -- they're attacking each other,' Ocean Towers resident Dena Wells told Campbell.

Amazingly,
a number of not-so-smart looters have actually been displaying their
looted goods on Twitter. Just check out the shocking photos in this article.

But most people living in the areas that were most affected by
Hurricane Sandy are decent people that just want some assistance. One
resident of Hoboken, New Jersey
became so frustrated that he inflated an air mattress and used it to
float down to city hall in an attempt to get some answers...

Nearly 20,000 people have been trapped at home in the New Jersey
city of Hoboken, just across the Hudson River from New York City, amid
accusations that officials were slow to deliver food and water.

One man blew up an air mattress and floated to City Hall, demanding
to know why supplies had not reached residents - at least a quarter of
homes there are flooded and 90% do not have power.

Just like we saw after Hurricane Katrina, the response by the federal
government and by big aid agencies such as the Red Cross has been very
slow. In fact, Staten Island Borough President James Molinaro has gone
so far as to call the Red Cross an "absolute disgrace" and is urging people that live in his area to quit giving money to them...

You know, I went to a shelter Monday night after the storm. People
were coming in with no socks, with no shoes. They were in desperate
need. Their housing was destroyed. They were crying. Where was the Red
Cross? Isn’t that their function? They collect millions of dollars.
Whenever there’s a drive in Staten Island, we give openly and honestly.
Where are they? Where are they? I was at the South Shore yesterday,
people were buried in their homes. There the dogs are trying to find
bodies. The people there, the neighbors who had no electricity, were
making soup. Making soup. It’s very emotional because the lack of a
response. The lack of a response. They’re supposed to be here….They
should be on the front lines fighting, and helping the people.

Sadly, the truth is that what we are seeing during the aftermath of
Hurricane Sandy is just a very small preview of what is coming on a
national level.

Our economy is a complete and total mess right now, and things are going to get a whole lot worse.
When unemployment starts skyrocketing again and large segments of the
population realize that there is no hope for a turnaround, many of them
are going to totally give in to despair and become very desperate.

And as we are seeing along the Jersey Shore and on Long Island right now, desperate people do desperate things.

That is why I am constantly pounding on the need to prepare for what is ahead. There are signs of social decay
all around us, and most Americans are not equipped to deal with the
pressures that come with a major emergency. When things totally fall
apart, you don't want your family to be totally unprepared and
surrounded by millions of angry and desperate people.

Hopefully Hurricane Sandy will serve as a wake-up call for millions of
American families. Time is definitely running out, and we all need to
get prepared while we still can.

This article first appeared here at the Economic Collapse. Michael Snyder is a writer, speaker and activist who writes and edits his own blogs The American Dream and Economic Collapse Blog. Follow him on Twitter here.

Re: Anarchy Along The Jersey Shore And On Long Island In The Aftermath Of Hurricane Sandy Sat Nov 03, 2012 9:34 am

Nothing like throwing in an add for profit in a story about destruction...Got to love the capitalists....?

Re: Anarchy Along The Jersey Shore And On Long Island In The Aftermath Of Hurricane Sandy Sat Nov 03, 2012 12:13 pm