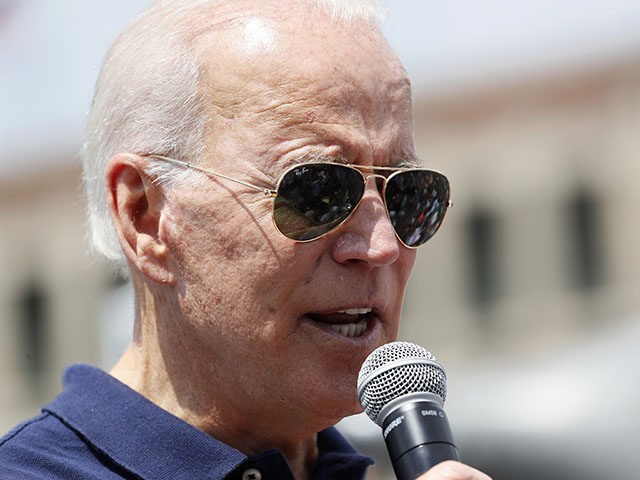 Former Vice President Joe Biden’s campaign is trying to clean up his racist statement about “poor kids” being “just as bright and just as talented as white kids.”

The aging Biden fired off his racist “white kids” dog whistle while addressing the Asian and Latino Coalition in Des Moines, Iowa, on Thursday.
“We should challenge these students, we should challenge students in these schools to have advanced placement programs in these schools,” the former vice president said. “We have this notion that somehow if you’re poor you cannot do it, poor kids are just as bright and just as talented as white kids.”
After realizing his gaffe had just revealed that he sees white people as superior in intelligence, he tried and failed to gloss it over: As an afterthought, he clumsily added, “Wealthy kids, black kids, Asian kids.”
On Friday, Biden’s campaign released a statement to clean up the “white kids” remark, a wildly dishonest statement that in no way reflects the reality of Biden’s long history of making racist remarks and expressing racist beliefs:

Vice President Joe Biden misspoke and immediately corrected himself during a refrain he often uses to make a point that all children deserve a fair shot, and children born into lower-income circumstances are just as smart as those born to wealthy parents. Joe Biden has spent his life fighting for civil rights and the dignity of all people.

The Biden campaign even has the gall to claim that the “Trump campaign posting the video without the Vice President’s immediate correction is disingenuous.” This after Biden has been serial-lying for months about Trump’s Charlottesville remarks condemning white supremacists.
Biden continues to spread this Very Fine People Hoax, continues to blatantly lie about Trump describing neo-Nazis and white supremacists as “very fine people” even though the transcript very clearly proves the president went out of his way to exclude them from his defense of those on both sides who came to Charlottesville in good faith to protest around a Confederate monument.
In fact, at the top of the Biden campaign statement, the Charlottesville hoax is repeated yet again:

As we approach the two year anniversary of Trump calling neo-Nazis and Klansmen “very fine people,” Donald Trump is desperate to change the subject from his atrocious record of using racism to divide this country.

Referring to my colleague Joel Pollak confronting the vice president on Thursday with the fact that he has been lying, the Biden campaign statement closes with an attack on Breitbart News:

…and it’s no coincidence this comes days after Joe Biden laid out how this president emboldens white nationalism and embraces racism, and hours after one of Trump’s Breitbart lackey confronted him in an attempt to gaslight about his response to Charlottesville.

For the record, here is exactly what Trump said about Charlottesville [emphasis mine]:

No one, however, has to lie to prove Joe Biden is a racist:
In 1975, Biden is on record defending racial segregation using the most patronizing and bigoted excuse of them all — it’s good for black people:

I think the concept of busing … that we are going to integrate people so that they all have the same access and they learn to grow up with one another and all the rest, is a rejection of the whole movement of black pride is a rejection of the entire black awareness concept, where black is beautiful, black culture should be studied and the cultural awareness of the importance of their own identity.

In 1975, Biden bragged about his friendship with virulent racist and segregationist George Wallace, about how much Wallace liked him, and said that Democrats need another George Wallace, just a more liberal one.
In 1988, Biden praised segregationist Sen. John Stennis (D-MS)  as a “man of character,” even after the Democrat sought to oppose Brown v. Board of Education with his Southern Manifesto. Watch for yourself:

You cannot go to a 7-Eleven or a Dunkin’ Donuts unless you have a slight Indian accent. I’m not joking.

Here’s what Biden said of Barack Obama and black people overall in 2007:

You got the first mainstream African-American who is articulate and bright and clean and a nice-looking guy. I mean, that’s a storybook, man.

As vice president in 2014, Biden was still using the term “Orient” to describe Asia.
That same year, Biden used the antisemitic term “shylock.” Watch for yourself:

And just this year, Biden has been running around praising Democrat segregationists.
Nope… Unlike Trump, no one has to lie to prove Biden is a racist.

»  Prince Charles Just Called For Military-Style Campaign For Global Transition & Biden’s On Board!
» IT'S ALRIGHT IF THEY DO IT! - Biden: Throwing ‘Kids in Cages’ Is Now ‘Moral and Humane’
» Joe Biden Wrecked On YouTube After White House Forgets To Turn Off Comments
» VIDEO from Inside the Biden White House Leaves People In Disbelief…”What depraved sh*t is going on in there?
» Former White House Physician Demands Biden Take Cognitive Test After Weird Presser Breakdown