AIRPORT authorities in Hong Kong have cancelled all remaining flights today after protesters swarmed the main terminal.
Some protesters wore bandages over their eyes in solidarity of a woman who was shot yesterday by police during demonstrations. 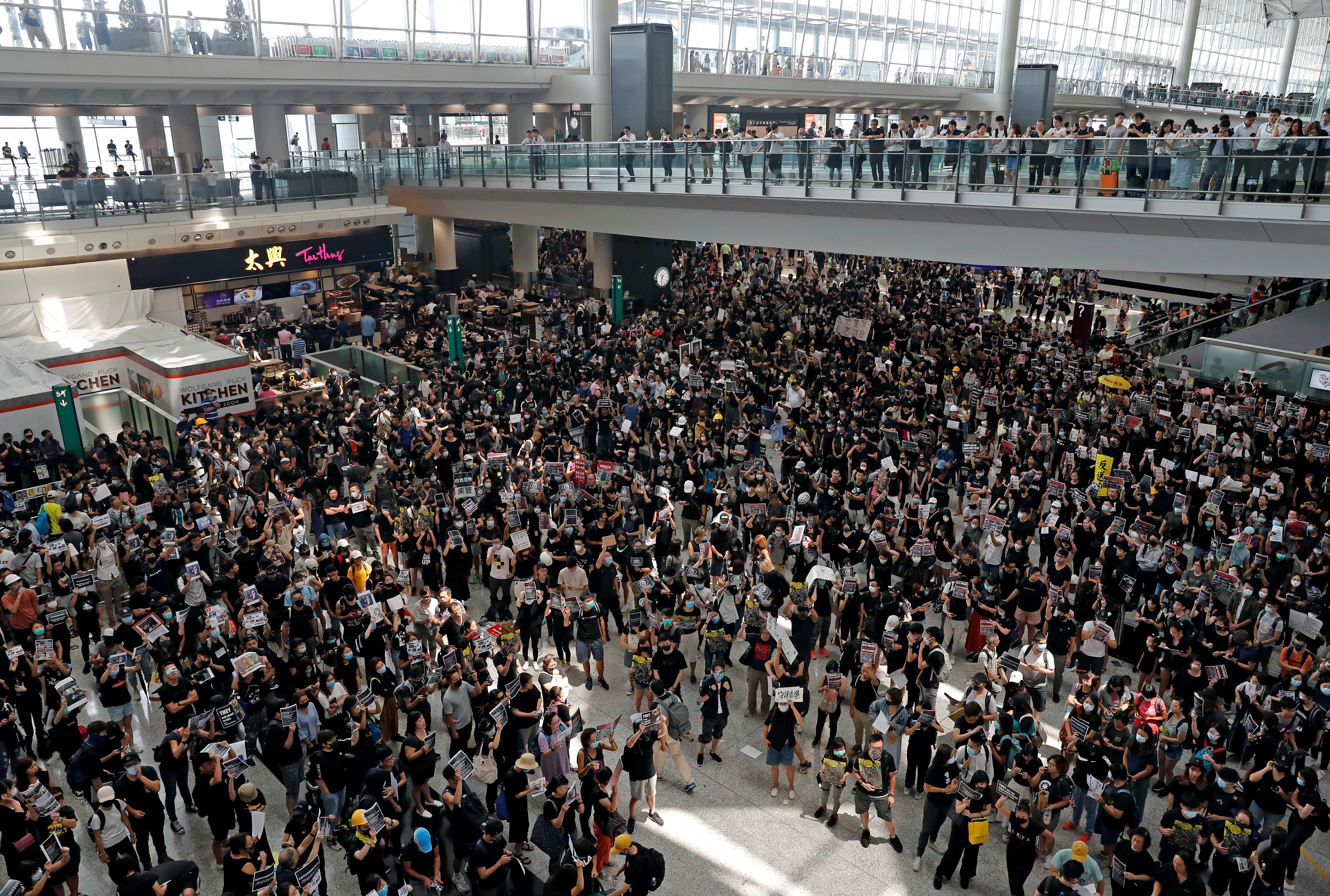 Source: Alahna Kindred – The Sun
Images circulated on social media of the woman bleeding heavily from her right eye – which doctors now fear she may lose.
The doctor treating her told the South China Morning Post: “I can confirm her injury is really serious.”

It is the fourth consecutive day that thousands of demonstrators have gathered in the airport and it is the biggest disruption to the territory since protests began in early June.
Hong Kong international airport is one of the busiest in the world and officials said the demonstration “seriously disrupted” airport operations.
In a statement on its website it reads: “Airport operations at Hong Kong International Airport have been seriously disrupted, all flights have been cancelled.
“All passengers are advised to leave the terminal buildings as soon as possible. Affected passengers please contact their respective airlines for flight arrangement.”

It added that all check-in services for departing flights had been suspended, while incoming flights were also being diverted or cancelled, according to CNN.
The UK Foreign Office has warned today: “A protest at Hong Kong Airport on 12 August has resulted in the cancellation of all flights out of Hong Kong for the remainder of 12 August.
Report this ad
Report this ad 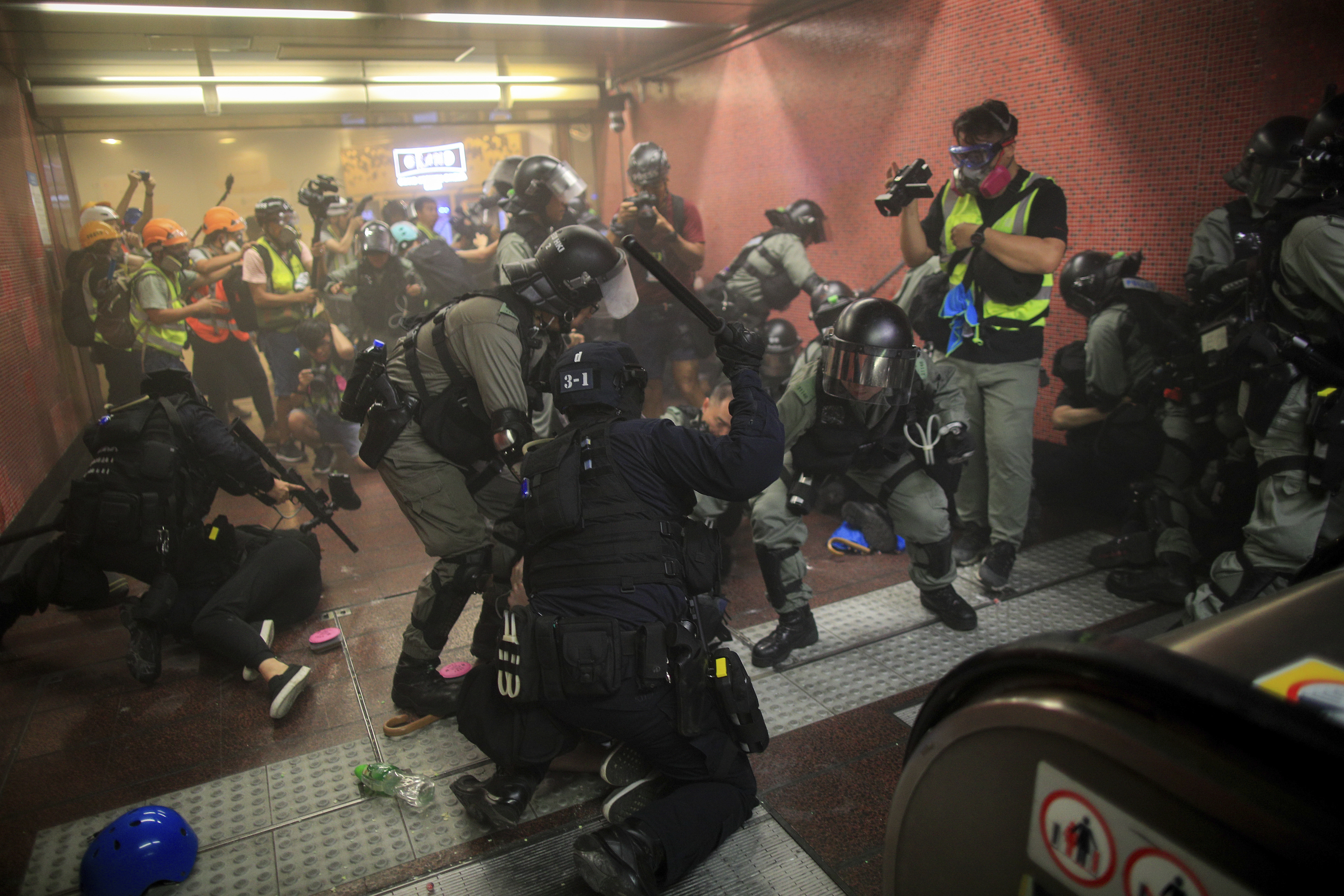 “The airport authorities advise members of the public not to travel to the airport.”

Thousands of demonstrators carried signs that read “an eye for an eye” and “stop shooting eyes” as they shouted “shame on police” during today’s sit in.
China issued a strong statement today, saying protesters have committed serious crimes and showed signs of “terrorism”.
Yang Guang, a spokesman for China’s Hong Kong and Macau affairs office, backed the police handling of the protests and said those who care about the city should come out against violence in a televised address.
Cathay Pacific staff were warned today they could be fired if they “support or participate in illegal protests” in Hong Kong.
Chief executive Rupert Hogg of the airline, Hong Kong’s flagship carrier, emailed today saying there was “zero tolerance approach to illegal activities” and there would be “disciplinary consequences”  that could include “termination of employment”.
Protests have gripped Hong Kong since June 2019, sparked by highly controversial legislation to extradite those convicted of crimes to mainland China and Taiwan.
That bill has been shelved for now – but the protests have mushroomed into a broader backlash against the government amid fears of the growing control of China’s Communist party.
Protesters also believe their leader should be elected in a more democratic way that reflects the preference of the voters.

The chief executive, Carrie Lam, is currently elected by a 1,200-member election committee – a mostly pro-Beijing body chosen by just six per cent of eligible voters.
Activists say they won’t stop until their main demands are met.
These include the resignation of the city’s leader, Carrie Lam, an amnesty for those arrested and a permanent withdrawal of the bill.
Video footage of the demonstrations over the weekend showed plainclothes officers, who appeared to be disguised as protesters, making arrests as authorities face accusations of using excessive force and throwing teargas indoors.
In one clip, a man is on the ground as an officer wearing jeans has his knee on the protester’s neck as a pool of blood from his forehead pools on the concrete.
In another video, heavily-armoured police are seen shooting a pepperball at a protesters, knocking him down.