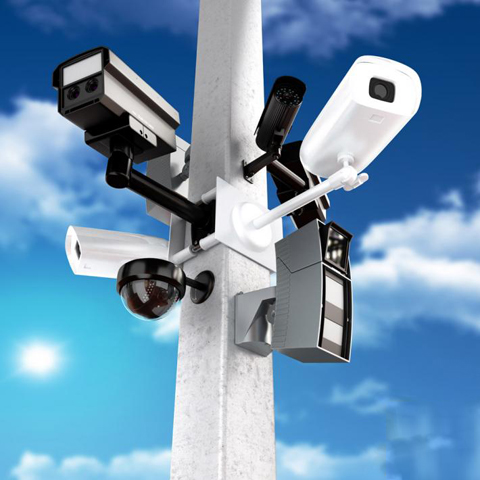 If you find the idea of surveillance cameras tracking your every move unsettling, a new line of clothing was created with you in mind.
The Adversarial Fashion Collection features garments that enable you to camouflage yourself as a car to confuse surveillance cameras. The clothes are covered in images of license plates that will cause automated license plate readers (ALPRs) to add junk data to the systems used for monitoring and tracking civilians. These are the systems behind those traffic tickets that come in the mail complete with photos of your vehicle carrying out some sort of infraction, such as speeding.
The line made its debut at the recent Def Con cybersecurity conference in Las Vegas. Designer Kate Rose said she was inspired to create the garments after a friend at the Electronic Frontier Foundation told her that plate readers tend to have very low accuracy and problems with specificity. For example, she said that they can be fooled by picket fences and other objects.
The patterns on these fabrics are made to mimic real license plates. ALPR systems are designed to look for anything within the camera’s range that is a rectangle with a combination of letters; it then crops that portion of the image and feeds it into a database to see if it matches registered license plates, at which point it is saved along with other points of data about the time and location.
The line consists of shirts, dresses, skirts, jackets and hoodies that have modified license plate images on them along with other types of circuitry patterns. Some even use the words of the Fourth Amendment, which protects Americans from unreasonable search and seizure, across multiple license plates.
People are urged to size up when buying the garments because the pattern is most effective when the fabric hangs straight; it can be warped when the garments fit tightly. The line is priced affordably, with crop tops selling for $25 and unisex bomber jackets going for $50 at the time of this writing.
In addition, the website for Adversarial Fashion offers resources to those who believe in the cause, such as image editing tools and APIs that allow people to design their own anti-surveillance garments.
Rose said that the clothes highlight the need for computer-controlled surveillance to become less invasive, and she is hoping that it will make the surveillance harder to use without oversight from humans. She said she was shocked by how easy it was to fool the system, with a photo showing how an ALPR read some of the plates on her dress as the license plates belonging to registered motorcycles.
ALPRs are often mounted on streetlights, street poles, mobile trailers and highway overpasses to track license plate numbers and data such as date, time and location. Capable of collecting as many as 1,000 license plates per minute, they go beyond simply spotting speeders; they are also detailed surveillance systems that can track people while going to sensitive locations such as immigration clinics and rehab centers.

This isn’t the first time someone has come up with a way to foil surveillance cameras. Adam Harvey, an artist based in Berlin, is the name behind the Hyperface project, which involves printing patterns on clothes that appear to have features like eyes and mouths that computers will interpret as faces. The aim is to overload algorithms and oversaturate an area with faces.
Adam Harvey also came up with a burqa and hoodie made of metallized fabric that can help skirt thermal imaging from drones. Another artist, Leo Selvaggio, came up with the idea of creating a 3D-printed rubber mask that would make everyone appear to cameras as the same person: him.
These efforts make it clear that people are not comfortable with the concept of surveillance. Unfortunately, this type of technology is only growing more invasive every day, and we are all being monitored in ways that even the most creative among us can’t imagine.
Sources for this article include:
Cnet.com
TheGuardian.com
TheGuardian.com