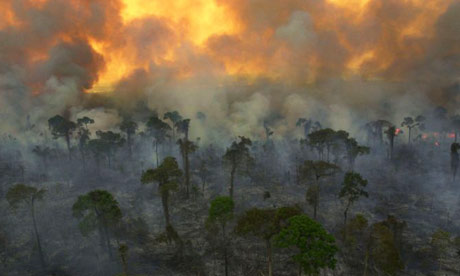 As news reaches around the world that the Amazon rainforest is burning at an unprecedented rate, people are beginning to ask questions about who is responsible. In the past week, since August 15, over 9,500 new forest fires were reported in Brazil, most of them spread across the Amazon basin.
According to Brazil’s National Institute for Space Research, over 74,000 forest fires were started in Brazil this year, which is more than double the 40,000 fires that were recorded in 2018. This represents an 83 percent increase in wildfires when compared to the same time last year, making it the most fires recorded in a single year since the Brazilian government started tracking such matters. 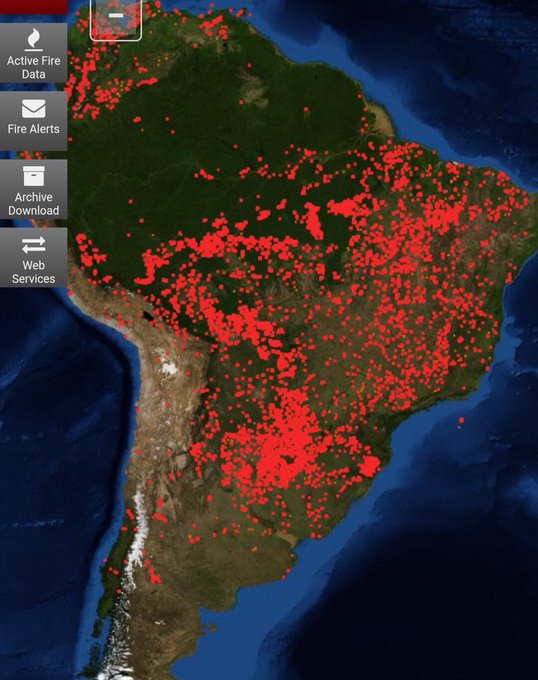 Even before this ominous development, things were looking pretty bleak for the Amazon. Last month, Truth Theory reported on new data from the National Institute for Space Research in Brazil, showing that the region’s rainforest saw an 80% reduction between 2006 and 2012. The report also noted that last year, deforestation increased to the highest levels seen in a decade, with a 13% increase that year alone.
Experts and activists have suggested a variety of reasons for the recent burning, but the common theme is that the government is allowing the rainforest to be ravaged by farmers and corporations for their own personal gain.

Christian Poirier, program director for the conservationist group, “Amazon Watch,” believes that these fires were started intentionally for the purpose of clearing space for cattle ranchers.
“The unprecedented fires ravaging the Amazon are an international tragedy and a dangerous contribution to climate chaos. This devastation is directly related to President Bolsonaro’s anti-environmental rhetoric, which erroneously frames forest protections and human rights as impediments to Brazil’s economic growth,” Poirier said in a statement.

The newly elected president Jair Bolsonaro campaigned on a misguided platform of stimulating economic growth by opening up the Amazon to industry. Since coming into office, his administration has significantly scaled back environmental protections, essentially giving a green light to loggers, miners, and ranchers to violently expel native tribes from their lands and destroy the local ecosystem.

Poirier believes that the current president’s rhetoric encourages ranchers  “to commit arson with wanton impunity.”
According to a Yale study, cattle ranching is responsible for roughly 80% of the Amazon’s deforestation, and much of the beef that is produced in the region is eventually shipped off to Europe and North America.
Amazon Watch believes that ranchers organized a coordinated “Fire Day” to set the Amazon on fire, CBS News reported.

Amazon Watch is not alone. Amnesty International secretary-general Kumi Naidoo also made a statement blaming the current condition of the Amazon on the controversial president.
“The responsibility to stop the wildfires that have been raging in the Amazon rainforest for several weeks now lies squarely with President Bolsonaro and his government. They must change their disastrous policy of opening up the rainforest for destruction, which is what has paved the way for this current crisis,” Naidoo said.

Ane Alencar, the scientific director of Brazilian NGO IPAM (Institute of Environmental Research in Amazonia), told Mongabay that these fires were exacerbated by the deforestation that had already taken place. This is because with fewer trees, the dry season in the Amazon become dryer, and thus more dangerous.
“The fire that we’re seeing today is a fire that’s directly related to deforestation,” Alencar said.
Bolsonaro has responded to the crisis by blaming NGO’s and “Indians” for the fires, and insisting that the problem is not important enough to deserve government resources.
“There aren’t the resources,” Bolsonaro told reporters, adding that, “This chaos has arrived.”
In another interview about the recent fires, Bolsonaro compared himself to the Captain Planet villain, “Captain Chainsaw.”
“I used to be called Captain Chainsaw. Now I am Nero, setting the Amazon aflame,” Bolsonaro said sarcastically.
Furthermore, documents leaked from the Brazilian government show that the current administration planned on building infrastructure projects through the Amazon as way of pushing back against international pressure to put protections on the forest.

A PowerPoint slide leaked from a government presentation about these infrastructure plans said that, “Development projects must be implemented on the Amazon basin to integrate it into the rest of the national territory in order to fight off international pressure for the implementation of the so-called ‘Triple A’ project. To do this, it is necessary to build the Trombetas River hydroelectric plant, the Óbidos bridge over the Amazon River, and the implementation of the BR-163 highway to the border with Suriname.”
One of the tactics listed in the document was framing the Amazon crisis as a wedge issue to divide liberals and conservatives. If the destruction of the Amazon can be reduced to a simple “political opinion,” the legitimate concerns from activists and experts can be easily dismissed as nothing more than a dissenting political opinion.
IMAGE CREDIT: pedarilhos

Forces allied to Brazilian President Bolsonaro have caused a huge forest fire, displacing an Indigenous community.
The Amazon Rainforest supplies Earth with 20% of oxygen and is thought to be home to 30% of all species. And yet this beautiful place is being destroyed by a fire that has lasted 20+ days.
Source dw.com:  After being sworn in, Bolsonaro wasted no time to make good on his promise. He started by shifting the power to designate indigenous land and nature reserves from Brazil’s Ministry of Justice to the country’s Ministry of Agriculture, which is headed by agricultural lobbyist Tereza Cristina Dias. Read more