Archaeologists in Bulgaria have discovered the oldest prehistoric
town ever found in Europe, dating back to the fifth millennium BC. An
ancient salt production site was also found at the Provadia-Solnitsata
settlement located in the country’s east. 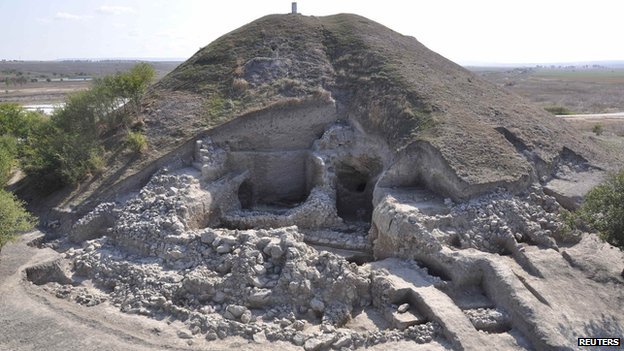 Archaeologists
in eastern Bulgaria say they have unearthed the oldest prehistoric town
ever found in Europe, along with an ancient salt production site that
gives a strong clue about why massive riches were discovered in the
region.

Excavations at the site near the modern-day town of Provadia have so
far uncovered the remains of a settlement of two-storey houses, a series
of pits used for rituals as well as parts of a gate, bastion structures
and three later fortification walls – all carbon dated between the
middle and late Chalcolithic age from 4,700 to 4,200 BC.

“We are not talking about a town like the Greek city-states, ancient
Rome or medieval settlements, but about what archaeologists agree
constituted a town in the fifth millennium BC,” said Vasil Nikolov, a
researcher with Bulgaria’s National Institute of Archeology, after
announcing the findings earlier this month.

Nikolov and his team have worked since 2005 to excavate the
Provadia-Solnitsata settlement, located near the Black Sea resort of
Varna.

A small necropolis, or burial ground, was also found this year, but
has yet to be studied more extensively and could keep archaeologists
busy for generations.

Archeologist Krum Bachvarov from the National Institute of Archeology
qualified this latest find as “extremely interesting” due to the
peculiar burial positions and objects found in the graves, which
differed from other neolithic graves found in Bulgaria.

“The huge walls around the settlement, which were built very tall and
with stone blocks…are also something unseen in excavations of
prehistoric sites in southeast Europe so far,” Bachvarov added.

Well fortified, a religious centre and most importantly, a major
production centre for a specialised commodity that was traded far and
wide, the settlement of about 350 people met all the conditions to be
considered the oldest known “prehistoric town” in Europe, the team says.

“At a time when people did not know the wheel and cart these people
hauled huge rocks and built massive walls. Why? What did they hide
behind them?” Nikolov asked.

As precious as gold


The area is home to huge rock-salt
deposits, some of the largest in southeast Europe and the only ones to
be exploited as early as the sixth millennium BC, Nikolov said.

This is what made Provadia-Solnitsata what it was.

Nowadays, salt is still mined there but 7,500 years ago it had a completely different significance.

“Salt was an extremely valued commodity in ancient times, as it was
both necessary for people’s lives and was used as a method of trade and
currency starting from the sixth millennium BC up to 600 BC,” the
researcher explained.

Salt extraction at the site first began in about 5,500 BC when people
started boiling brine from the nearby salty springs in dome kilns found
inside the settlement, Nikolov said, citing carbon dating results from a
British laboratory in Glasgow.

“This is the first time in southeast Europe and western Anatolia that
archeologists have come upon traces of salt production at such an early
age, the end of the sixth millennium BC, and managed to prove it with
both archeologic and scientific data,” Bachvarov confirmed.

Salt production was moved outside the settlement towards the end of
the sixth millennium and productivity gradually increased. After being
boiled, the salt was baked to make small bricks.

“At a time when salt was as precious as gold you can imagine what this meant,” he said.

The salt trade gave the local population huge economic power, which
could explain the gold riches found in graves at the Varna Necropolis
and dating back to around 4,300 BC, Nikolov suggested.

The 3,000 jewelry pieces and ritual objects have been internationally
recognised as the oldest gold treasure in the world, raising questions
as to how a culture of farmers and stock-breeders from a region
otherwise poor in natural resources could acquire such wealth.

The excavations have however suffered from a chronic lack of state funding, which Nikolov replaced with private donations.

A British anthropologist, a Japanese ceramics expert and a team of
radiocarbon specialists from Germany have worked on the site for free
this season.