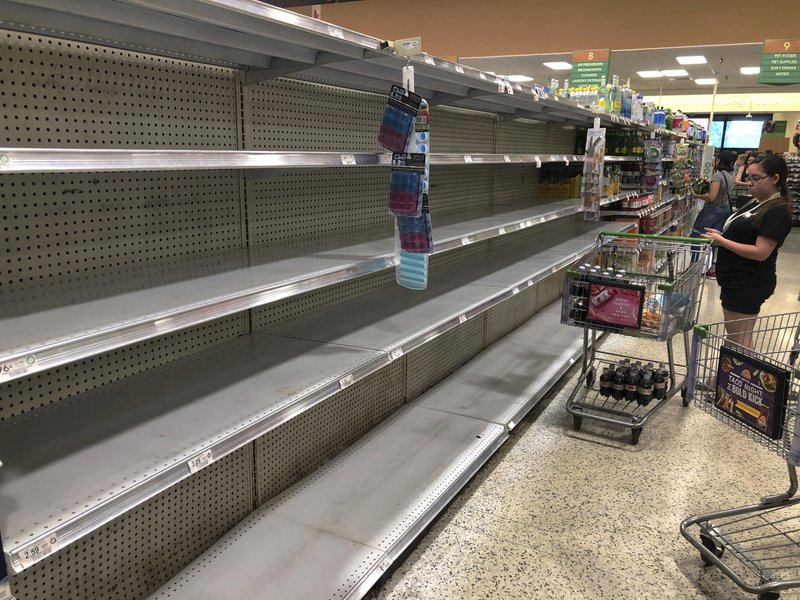 Store shelves are empty of bottled water as residents buy supplies in preparation for Hurricane Dorian, in Doral, Fla., Thursday, July 29, 2019. The U.S. National Hurricane Center says Dorian could hit the Florida coast over the weekend as a major hurricane. (AP Photo/Marcus Lim)

MIAMI (AP) — Florida residents picked the shelves clean of bottled water and lined up at gas stations Thursday as an increasingly menacing-looking Hurricane Dorian threatened to broadside the state over Labor Day weekend.
Leaving lighter-than-expected damage in its wake in Puerto Rico and the Virgin Islands, the second hurricane of the 2019 season swirled toward the U.S., with forecasters warning it will draw energy from the warm, open waters as it closes in.
The National Hurricane Center said the Category 2 storm is expected to strengthen into a potentially catastrophic Category 4 with winds of 130 mph (209 kph) and slam into the U.S. on Monday somewhere between the Florida Keys and southern Georgia — a 500-mile (805-kilometer) stretch that reflected the high degree of uncertainty this far out.
The following message will be displayed to users with unsupported browsers: Your browser does not support the HTML tag. Try viewing this in a modern browser like Chrome, Safari, Firefox or Internet Explorer 9 or later.
“If it makes landfall as a Category 3 or 4 hurricane, that’s a big deal,” said University of Miami hurricane researcher Brian McNoldy. “A lot of people are going to be affected. A lot of insurance claims.”
President Donald Trump canceled his weekend trip to Poland and warned Florida residents to be prepared.
“All indications are it’s going to hit very hard and it’s going to be very big,” Trump said in a video he tweeted Thursday evening, comparing Dorian to Hurricane Andrew, which devastated South Florida in 1992. 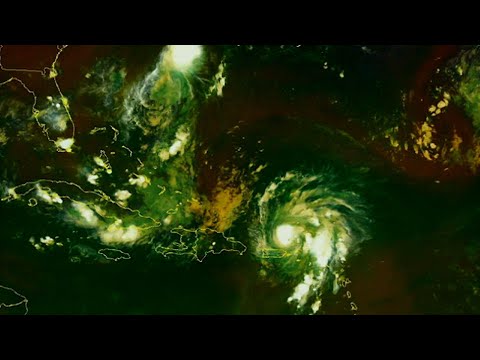 With the storm’s track still unclear, no immediate mass evacuations were ordered.
Along Florida’s east coast, local governments began distributing sandbags, shoppers rushed to stock up on food, plywood and other emergency supplies at supermarkets and hardware stores, and motorists topped off their tanks and filled gasoline cans. Some fuel shortages were reported in the Cape Canaveral area.
Josefine Larrauri, a retired translator, went to a Publix supermarket in Miami only to find empty shelves in the water section and store employees unsure of when more cases would arrive.
“I feel helpless because the whole coast is threatened,” she said. “What’s the use of going all the way to Georgia if it can land there?”
Tiffany Miranda of Miami Springs waited well over 30 minutes in line at BJ’s Wholesale Club in Hialeah to buy hurricane supplies. Some 50 vehicles were bumper-to-bumper, waiting to fill up at the store’s 12 gas pumps.
“You never know with these hurricanes. It could be good, it could be bad. You just have to be prepared,” she said.
As of Thursday night, Dorian was centered about 295 miles (475 kilometers) northeast of the Bahamas, its winds blowing at 105 mph (169 kph) as it moved northwest at 12 mph (19 kph).
It is expected to pick up steam as it pushes out into warm waters with favorable winds, the University of Miami’s McNoldy said, adding: “Starting tomorrow, it really has no obstacles left in its way.”
The National Hurricane Center’s projected track had the storm blowing ashore midway along the Florida peninsula, southeast of Orlando and well north of Miami or Fort Lauderdale. But because of the difficulty of predicting its course this far ahead, the “cone of uncertainty” covered nearly the entire state.
Forecasters said coastal areas of the Southeast could get 5 to 10 inches (13 to 25 centimeters) of rain, with 15 inches (38 centimeters) in some places, triggering life-threatening flash floods.
Also imperiled were the Bahamas, with Dorian’s expected track running just to the north of Great Abaco and Grand Bahama islands.
Jeff Byard, an associate administrator at the Federal Emergency Management Agency, warned that Dorian is likely to “create a lot of havoc with infrastructure, power and roads,” but gave assurances FEMA is prepared to handle it, even though the Trump administration is shifting hundreds of millions of dollars from FEMA and other agencies to deal with immigration at the Mexican border.
“This is going to be a big storm. We’re prepared for a big response,” Byard said.
Florida Gov. Ron DeSantis declared a state of emergency, clearing the way to bring in more fuel and call out the National Guard if necessary, and Georgia’s governor followed suit.
Royal Caribbean, Carnival and Norwegian began rerouting their cruise ships. Major airlines began allowing travelers to change their reservations without a fee.
At the Kennedy Space Center at Cape Canaveral, NASA decided to move indoors the mobile launch platform for its new mega rocket under development.
A Rolling Stones concert Saturday at the Hard Rock Stadium near Miami was moved up to Friday night.
The hurricane season typically peaks between mid-August and late October. One of the most powerful storms ever to hit the U.S. was on Labor Day 1935. The unnamed Category 5 hurricane crashed ashore along Florida’s Gulf Coast on Sept. 2. It was blamed for over 400 deaths.
Dorian rolled through the Virgin Islands and Puerto Rico as a Category 1 hurricane on Wednesday. 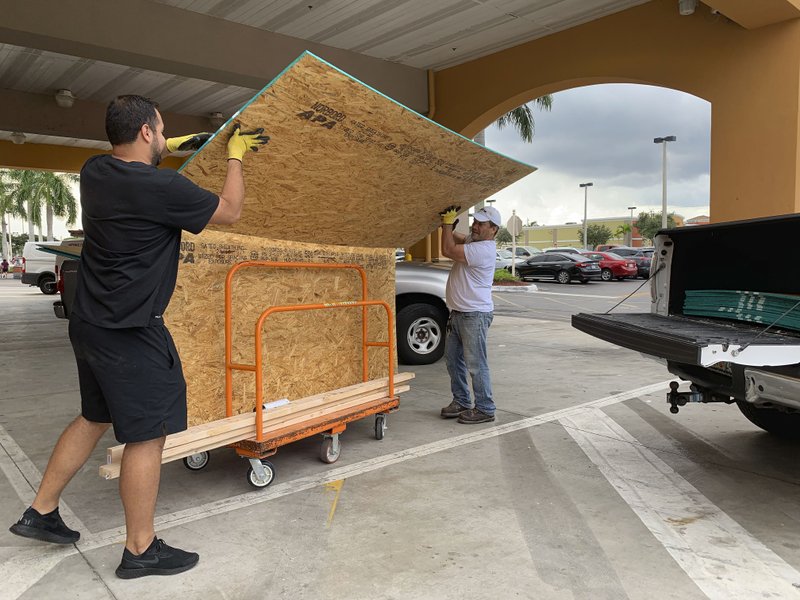 Shoppers load their truck with supplies to prepare ahead of Hurricane Dorian at The Home Depot, Aug. 29, 2019, in Pembroke Pines, Fla. (AP Photo/Brynn Anderson)

The initial blow did not appear to be as bad as expected in Puerto Rico, which is still recovering from the devastation wrought by Hurricane Maria two years ago. Blue tarps cover some 30,000 homes, and the electrical grid is in fragile condition.
But the tail end of the storm unleashed heavy flooding along the eastern and southern coasts of Puerto Rico. Cars, homes and gravestones in the coastal town of Humacao became halfway submerged after a river burst its banks.
Police said an 80-year-old man in the town of Bayamón died after he fell trying to climb to his roof to clear it of debris ahead of the storm.
Dorian caused an island-wide blackout in St. Thomas and St. John in the U.S. Virgin Islands and scattered outages in St. Croix, government spokesman Richard Motta said.
No serious damage was reported in the British Virgin Islands, where Gov. Augustus Jaspert said crews were already clearing roads and inspecting infrastructure by late Wednesday afternoon.
Back in Florida, Mark and Gisa Emeterio enjoyed a peaceful afternoon sunbathing and wading in the ocean at Vero Beach. The newly retired couple from Sacramento, California, wanted to relax after spending the morning shuttering their home.
Mark, a retired pipe layer, and Gina, a retired state employee, planned to wait it out the storm with local friends more experienced with hurricanes.
“We got each other,” Mark Emeterio said. “So we’re good.”
“I told him, ‘Whatever happens, hold my hand,’” his wife joked.
___
Associated Press writers Seth Borenstein and Michael Balsamo in Washington; Danica Coto in San Juan, Puerto Rico; Marcia Dunn in Cape Canaveral, Florida; Marcus Lim in Miami; Ellis Rua in Vero Beach and Mike Schneider in Orlando, Florida, contributed to this report.