A team of scientists at the University of Georgia has used CRISPR-Cas9 gene editing to engineer brown anoles (Anolis sagrei) with transmissible mutations in TYR (tyrosinase), a gene involved in the synthesis of the pigment melanin. 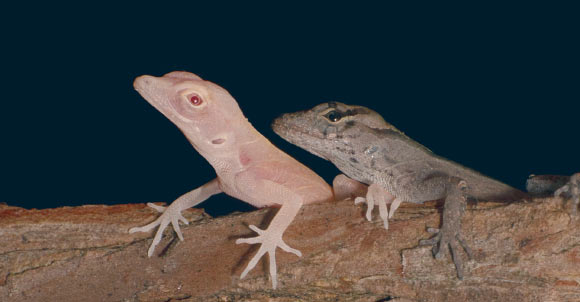 Albino (left) and wild-type (right) anole lizards. Image credit: Rasys et al, doi: 10.1016/j.celrep.2019.07.089.
“We wanted to explore anole lizards to study the evolution of gene regulation, since they’ve experienced a series of speciation events on Caribbean islands, much like Darwin’s finches of the Galapagos,” said University of Georgia’s Dr. Doug Menke, senior author of the study.
The way gene editing is performed in most model systems is to inject CRISPR-Cas9 gene-editing reagents into freshly fertilized eggs or single-cell zygotes.
But this technique cannot be used in reptiles, because lizards have internal fertilization and the time of fertilization cannot be predicted. An isolated single-cell embryo from a female lizard also cannot be easily transferred, making it almost impossible to manipulate outside of the lizard.
Dr. Menke and colleagues noticed that the transparent membrane over the ovary allowed them to see all of the developing eggs, including which eggs were going to be ovulated and fertilized next.
The researchers decided to inject the CRISPR reagents into the unfertilized eggs within the ovaries and see if the CRISPR would still work.
“Because we are injecting unfertilized eggs, we thought that we would only be able to perform gene editing on the alleles inherited from the mother. Paternal DNA isn’t in these unfertilized oocytes,” Dr. Menke said.
“We had to wait three months for the lizards to hatch, so it’s a bit like slow-motion gene editing. But it turns out that when we did this procedure, about half of the mutant lizards that we generated had gene-editing events on the maternal allele and the paternal allele.”
“This suggests that the CRISPR components remain active for several days, or even weeks, within the unfertilized eggs.” 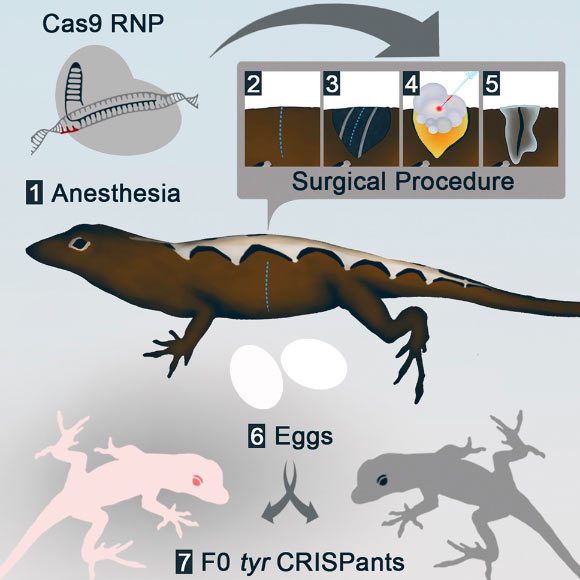 The reproductive biology of reptiles makes accessing single-cell embryos difficult and presents a major barrier for deploying gene-editing technologies in these species. Rasys et al report that the microinjection of Cas9 ribonucleoprotein complex (RNP) into immature lizard oocytes enables the production of lizards with targeted mutations. Image credit: Rasys et al, doi: 10.1016/j.celrep.2019.07.089.
After screening the offspring, the team found that about 6% to 9% of the oocytes, depending on their size, produced offspring with gene-editing events.
“Relative to the very established model systems that can have efficiencies up to 80% or higher, 6% seems low, but no one has been able to do these sorts of manipulations in any reptile before,” Dr. Menke said.
“We had two reasons for making the lizards albino, as opposed to editing other traits,” he added.
“First, when the TYR gene is knocked out, it results in a loss of pigmentation without being lethal to the animal.”
“Second, since humans with albinism often have vision problems, we hope to use the lizards as a model to study how the loss of this gene impacts retina development.”
The findings are published in the journal Cell Reports.
_____
Ashley M. Rasys et al. 2019. CRISPR-Cas9 Gene Editing in Lizards through Microinjection of Unfertilized Oocytes. Cell Reports 28 (9): 2288-2292; doi: 10.1016/j.celrep.2019.07.089