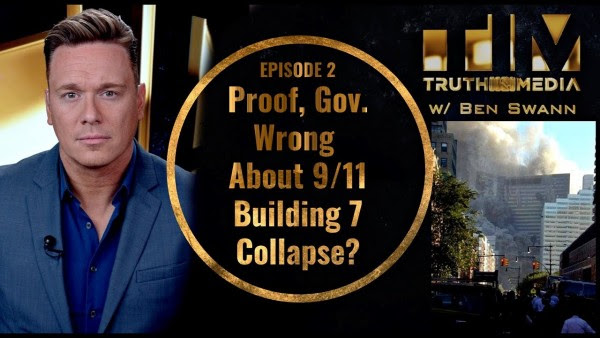 Proof NIST Is Wrong About Collapse of WTC Building 7

Today is the 18th anniversary of 9/11 and no Mainstream Media outlets are covering the following major developments that may force a re-opening and re-investigation of this pivotal event in US history – but former MSM news anchor, Ben Swann is bringing us these stories.
The first development, as was reported here last July, involves the board of fire commissioners at the Franklin Square and Monson Fire District in suburban New York City, which became the first legislative body in the country to officially support a new investigation into the events of 9/11 when they unanimously passed a resolution claiming, “Overwhelming evidence of pre-planted explosives and/or incendiaries,” which they say caused the destruction of the three World Trade Center buildings. They are calling for a comprehensive, Federal grand jury investigation and prosecution of “Every crime related to the attacks of September 11, 2001…and that every person who was responsible face justice…”
The second development is the new study published by the University of Alaska Fairbanks by Dr. Leroy Hulsey that agrees with over 3,000 AE911Truth engineers who say that building could not have fallen down the way that our government says it did – and goes even further to say that there is only one way for World Trade Center Building 7 to have come down. The four-year, 158-page $300,000 study, “A Structural Reevaluation of the Collapse of World Trade Center 7” used computer technology to prove that what the National Institute of Standards and Technology (NIST) said is not only wrong, it’s impossible. Furthermore, the study concludes with absolute certainty that there is only one way that building could have come down – the entire core of support beams failed at the same time in a controlled demolition.
The finite element analysis used computer modelling based on the original blueprints for World Trade Center 7 to determine what could and what could not have caused the collapse. It studied NIST’s argument that Building 7 (which was not hit by any plane) collapsed due to a fire-induced “progressive collapse” caused by office fires that were fueled by office furnishings and found them to be untenable.
The study concluded, “Fires could not have caused weakening or displacement of structural members capable of initiating any of the hypothetical local failures alleged to have triggered the total collapse of the building nor could any local failures, even if they had occurred have triggered a sequence of failures that would have resulted in the observed total collapse…It is our conclusion, based upon these findings, that the collapse of World Trade Center 7 was a global failure involving the near-simultaneous failure of all columns in the building and not a progressive collapse involving the sequential failure of columns throughout the building.”
Anyone with eyes to see does not need an august body of scientists to declare the obvious this but it doesn’t hurt to have the science settled.
Richard Gage from Architects & Engineers for 9/11 Truth joins Swann and he agrees with the results of UAF’s study. “Any other scenario could not duplicate, by any stretch of the imagination the actual visible failure modes that this building exhibited on the videos – and by the way, fire has never brought down a skyscraper before 9/11.
“Skyscrapers are fireproofed. They have two- and three-hour fire protection around columns and beams in the building. Fire only lasts for 20 or 30 minutes in a given area. So, this has to claim, somehow that – the fog in their original report – that this fire was going on for an hour and a half to two hours immediately prior to these beams thermally-expanding – which is the new phenomenon that NIST claims brought this building [down].
“Thermally-expanding beams, which pushed a girder off of its seat on this column 79, under the east penthouse, causing this vertical collapse, all the way from the east penthouse down and then somehow, in six seconds, this collapse has to travel laterally, across this football [field]-sized building, gutting the inside of the building – and then what we see in the video, they tell us is the exterior of the building collapsing.
“None of that could be true. It’s proven, six ways from Sunday, in this landmark study, computer finite element analysis by the University of Alaska.”
Ben Swann was an anchor at CBS46 in Atlanta when he created a news segment called Reality Check, that explored topics like the vaccine-autism link, false flag mass shootings and the US’ role in the development of ISIS, among others that are seen on Alternative News websites but are verboten in the mainstream. It was his segment on Pizzagate that finally got him canned by a major network in 2017 – but now, he’s restarting Reality Check on his own platform.