The basics of beekeeping for beginners 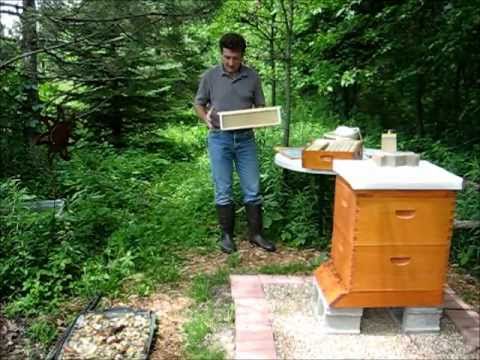 The basics of beekeeping for beginners

Before deciding to get into beekeeping, it’s important to know what you’re signing up.  It may seem daunting, but beekeeping comes down knowing the basics.
If you’ve considered getting a colony or more of bees, make sure you figure out the best way to make it affordable and easy on you in your situation. It can be intimidating, but you can make changes as you go if you need to!
Acquiring Bees
When you first get into beekeeping, you’ll obviously need some bees! The American Golden Italian Honeybee (Apis mellifera ligustica) is probably your best investment for a homestead apiary. They’re great honey producers with gentle dispositions, have a strong resistance to disease and natural enemies and are able to withstand wintering-over in colder climates. They also seem less inclined to swarm than other strains.
Mountain Apiaries is located in Georgia and they will ship coast to coast. The entire package will cost about $120. Their package bees include a screen box, sugar water container or fondant blocks, approx. +/- 3 lbs. of bees which include nurse bees, forager bees, guard bees, and drone bees. The queen bee will arrive in a separate queen cage. Obviously, you can choose to buy bees elsewhere, this company was simply an example of what is being offered.
The Queen Bee
Your hive’s queen will spend most of her time in the brood chamber, being fed and gently groomed by young worker bees. This will enable her to lay upwards of 3,000 eggs a day.In addition to the queen’s reproductive function, latest discoveries seem to indicate that the queen bee secretes an unidentified “queen substance” which keeps the colony in good morale and prevents the workers from laying. In the absence of a fully developed female queen, some of the worker bees may start to lay, but their eggs will produce only non-working males or drones. This will cause the community to become weak and demoralized. Without the hive mother’s secretion, the bees know within minutes that they’re queenless and become loud, nasty and generally uptight. Be sure your bee purchase includes a healthy young queen with your nucleus. Most of the times, she will be good for at least two years and up to five, in exceptional cases.
Before ordering bees, you’ll need a hive to put them in.
Bee Hives
NOTE: This complete beehive description can be found on Mother Earth News.
The modern beehive is very simple and easy-to-use. To save money, you can easily build one, but factory-made equipment is pretty inexpensive and well made so it just might be worth the small added expense.
Beehives are made up of several different, but important sections. Starting from the bottom, the first section of your colony’s home. This is often a cypress-wood hive stand. While optional, this stand protects the main part of the structure from the deteriorating effects of moisture and vegetation. This base is set on cinders or ashes to help the pollen- and nectar-laden honeybees make it home without fighting sharp blades of grass and weeds. A bee could be killed or injured if she crash-lands into grass or sharp weeds. A further aid to such an overloaded worker is an inclined board on the front of the hive stand, so if the returning bee misses her mark she can still struggle up the ramp to the safety of the hive’s entrance.
Next is the reversible bottom board which supports the section above it. This partition protects the hive from any nastiness below and affords a space for the bees to enter the brood chamber above it.
The brood chamber, which is also often called the “Langstroth movable frame hive”, is the third section up from the ground. It looks like an oversized milk crate without a top or bottom and contains 10-20 foundation frames on which the bees build comb to raise brood or store honey. Some hives have 20 frames, like the image below. The frames hang side by side in the chamber. They must be spaced just far enough apart to allow the bees to pass around and between them, but not so far that the insects will be tempted to build connecting links of the comb between them, which can be irritating to the beekeeper.
The beeswax foundation, which fits snugly inside the individual frame, is a sheet of pure beeswax stamped with the same base pattern (for worker cells) found in a natural comb. The bees will find this material laid out in such a convenient form already and proceed to draw out the foundation into full. This is a tremendous advantage to the beekeeper because a colony ordinarily spends a lot of time and burns up to 15 pounds of honey making and forming just one pound of beeswax.
Directly above the brood chamber is one or more supers. These are the storage sections. Each is a duplicate of the brood chamber, although often only half as deep, and contains 10 comb frames where surplus honey may be stashed. You can stack as many as five of these supers on a hive and reap the sweet liquid as it comes in, or you can wait until the honey flow ends and do all your collecting at once.
The last section on the top of the hive is the telescoping cover. It’s called this because it slides down about three inches all around the uppermost super. It’s metal upper surface, generally made of galvanized steel, protects the whole hive from rain, snow and nasty weather in general.
That’s the basic information you need when considering beekeeping on your homestead.

» Beekeeping For Beginners and Beekeeping Basics - Off Grid Living
» Gerson Therapy: Green Juice For Beginners + Gerson Basics with charts!
» EGADS! NOT ANOTHER HOLISTIC DOCTOR 'SUICIDE'!
» How to Buy Silver AND Copper for Beginners!
» Beginners Guide to Metaphysics