Astronomers have spotted what they believe is the second object of interstellar origin ever observed in the Solar System. 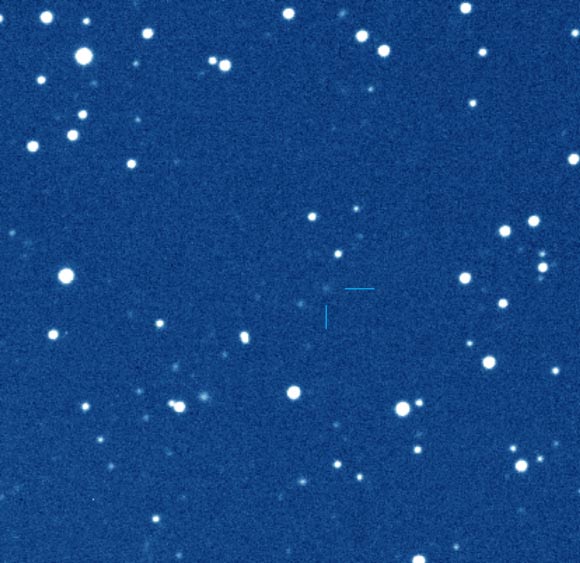 Comet C/2019 Q4. Image credit: G. Borisov.
C/2019 Q4 is a relatively large active comet between 1.2 and 10 miles (2-16 km) in diameter.
Also designated 2I/Borisov, the object was discovered by Gennady Borisov, an amateur astronomer from Crimea, Ukraine, on August 30, 2019.
About a week later, NASA and ESA astronomers obtained images of the object and performed several position measurements. The data confirmed the object’s unusual orbit, which was first reported by NASA’s Scout system.
“We can tell a lot about an object from the shape of its orbit, in particular its eccentricity — how much it is stretched,” explained Dr. Marco Micheli from ESA’s Near-Earth Object Coordination Centre and colleagues.
“Planets in near-perfect circular orbits around their star, Earth for example, have an eccentricity close to zero.”
“Comets and asteroids in orbit around a body with elongated paths are described as having an eccentricity of between zero and one, and objects with an eccentricity greater than one, ‘hyperbolic’ orbits, are interstellar.”
Current observations suggest that C/2019 Q4 is interstellar, its orbit being highly elongated with an eccentricity of 3.14.
“The comet’s current velocity is high, about 93,000 mph (150,000 kmh), which is well above the typical velocities of objects orbiting the Sun at that distance,” said Dr. Davide Farnocchia of NASA’s Center for Near-Earth Object Studies.
“The high velocity indicates not only that the object likely originated from outside our Solar System, but also that it will leave and head back to interstellar space.” 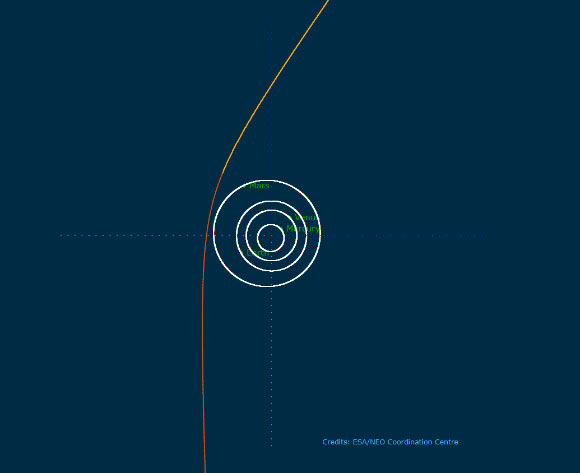 The hyperbolic orbit of C/2019 Q4. Image credit: ESA.
C/2019 Q4 is heading toward the inner Solar System and is currently 260 million miles (420 million km) from the Sun.
On October 26, 2019, the comet will pass through the ecliptic plane — the plane in which Earth and the other planets orbit the Sun — from above at roughly a 40-degree angle.
It is expected to make its closest approach to the Sun on December 9, coming within about 182 million miles (293 million km) of our star.
It will reach its closest point to Earth on December 28 at a distance of about 176 million miles (283 million km).
“We are now working on getting more observations of this unusual object,” Dr. Micheli said.
“We need to wait a few days to really pin down its origin with observations that will either prove the current thesis that it is interstellar, or perhaps drastically change our understanding.”
The discovery of C/2019 Q4 was announced in the Minor Planet Electronic Circular (MPEC) newsletter issued by the International Astronomical Union’s Minor Planet Center on September 13, 2019.
_____
H. Mikuz et al. Comet C/2019 Q4 (Borisov). Minor Planet Electronic Circular # 2019-R113