The NASA/ESA Hubble Space Telescope has captured this vivid image of Messier 110, one of the satellite galaxies of the famous Andromeda Galaxy. 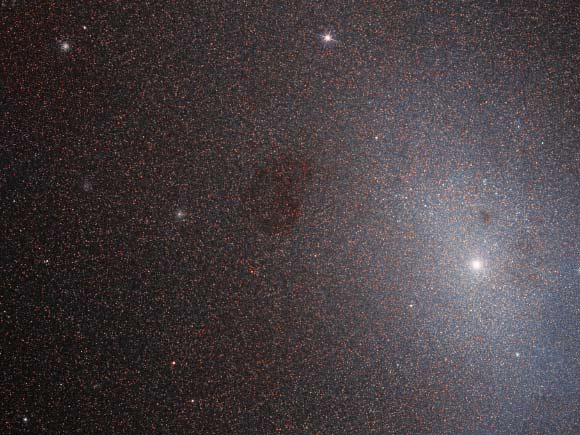 This Hubble image reveals a detailed view of part of the dwarf elliptical galaxy Messier 110. The color image was made from separate exposures taken in the visible and near-infrared regions of the spectrum with Hubble’s Wide Field Planetary Camera 2 (WFPC2). It is based on data obtained through two filters. The color results from assigning different hues to each monochromatic image associated with an individual filter. Image credit: NASA / ESA / Hubble / L. Ferrarese et al.
Messier 110 lies approximately 2.6 million light-years away in the constellation of Andromeda.
This galaxy was discovered by the French astronomer Charles Messier on August 10, 1773. Although he never included the galaxy in his astronomical catalogue, it was depicted by him on a drawing of the Andromeda Galaxy.
Messier 110 was independently discovered by Caroline Herschel, an astronomer and the sister of William Herschel, on August 27, 1783.
The suggestion to assign it a Messier number was made by the British astronomer Kenneth Glyn Jones in 1967.
Messier 110 is a member of the Local Group, a gathering of galaxies comprising the Milky Way and a number of the galaxies closest to it.
Specifically, it is one of the many satellite galaxies encircling the Andromeda Galaxy, the nearest major galaxy to our own.
Also known as M110, LEDA 2429, NGC 205 and UGC 426, Messier 110 is classified as a dwarf elliptical galaxy, meaning that it has a smooth and almost featureless structure.
“Dwarf ellipticals are quite common in groups and clusters of galaxies, and are often satellites of larger galaxies,” the Hubble astronomers said.
“Because they lack stellar nurseries and contain mostly old stars, elliptical galaxies are often considered ‘dead’ when compared to their spiral relatives.”
“However, scientists spotted signs of a population of young, blue stars at the center of Messier 110 — hinting that it may not be so dead after all.”