Russia Refuses to Tell NASA What Caused Mystery Leak on ISS: ‘We Won’t Tell You Anything’ 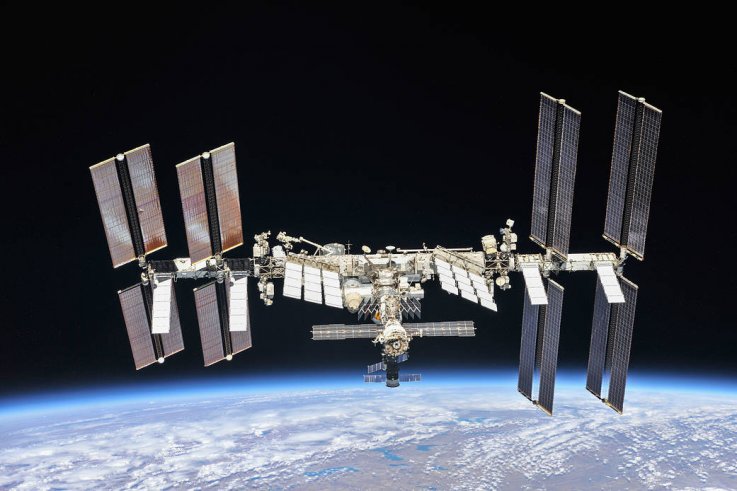 Source:   Hannah Osborne
Russia has said it knows what caused the air leak on board the International Space Station in 2018 but intends to keep it a secret, with its space agency head Dmitry Rogozin stating: “We won’t tell you anything.”
The leak, which caused a drop in pressure, took place on 29 August, 2018. After investigating the cause, the crew found a small hole—0.07 inches in diameter—and fixed it using heat-resistant tape. It was in a Russian Soyuz spacecraft docked at the ISS and it posed no threat to any of the astronauts on board.
What caused the hole was not known. Roscosmos General Director Rogozin initially suggested it could have been the result of a tiny meteorite puncturing the spacecraft, but shortly after this he announced the hole had been “done by a human hand.” In an interview with Russia’s Tass news agency at the time, he said: “We are considering all the theories. The one about a meteorite impact has been rejected because the spaceship’s hull was evidently impacted from inside. However it is too early to say definitely what happened.
“But, it seems to be done by a faltering hand…it is a technological error by a specialist. It was done by a human hand—there are traces of a drill sliding along the surface. We don’t reject any theories.”
In a statement, NASA said that the fact the hole had been caused by a human did not suggest it was created intentionally or with malintent. It said both the U.S. and Russia’s space agencies are investigating the incident to determine the cause.
On 18 September, Rogozin said they now know what caused the hole. “It was in the household compartment [of the Soyuz MS-09 ship] … We took all the samples. What happened is clear to us, but we won’t tell you anything. There must be some secret with us,” he said, according to state news agency RIA Novosti.
The Kremlin did not comment on Roscosmos’ decision to keep the source a secret. In a report in Tass, it deferred all questions about the leak back to Rogozin.
Following the announcement, NASA administrator Jim Bridenstine told the Houston Chronicle that he plans to talk with Rogozin directly. “They have not told me anything. I don’t want to let one item set [the relationship] back, but it is clearly not acceptable that there are holes in the International Space Station,” he is quoted as saying.
The ISS is a joint project between NASA, Roscosmos, the European Space Agency (ESA), Japan’s JAXA and Canada’s CSA. It has been continuously inhabited since November 2000.
It is not clear how long the ISS will operate for. Roscosmos has said it will be part of the program until at least 2024, while there are plans for NASA to continue using the space station until 2030.