OUT OF MIND » TRUTH IN CONSPIRACY THEORIES? » HISTORIES MYSTERIES » Ant People Legend of the Hopi Native Americans & Connections to the Anunnaki 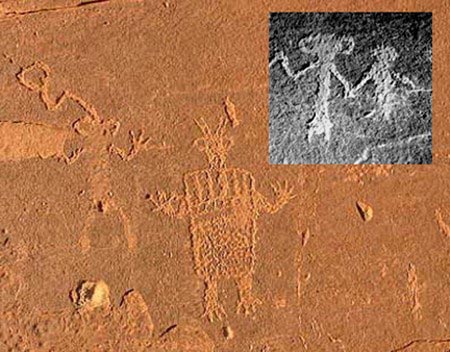 Ant People Legend of the Hopi Native Americans & Connections to the Anunnaki – By Corbin Black
The Smoking Man
Source – ancient-code.com

Two-Horn Society image via U.S. History, Fewkes, Walter. “Fire Worship of the Hopi Indians.” Annual Report of the Smithsonian Institute. Washington DC: Government Printing Office, 1920.Images.com, public domain
Ancient Origins elaborates on the legend: “One of the most intriguing Hopi legends involves the Ant People, who were crucial to the survival of the Hopi—not just once but twice. The so-called “First World” (or world-age) was apparently destroyed by fire—possibly some sort of volcanism, asteroid strike, or coronal mass ejection from the sun. The Second World was destroyed by ice—Ice Age glaciers or a pole shift. During these two global cataclysms, the virtuous members of the Hopi tribe were guided by an odd-shaped cloud during the day and a moving star at night that led them to the sky god named Sotuknang, who finally took them to the Ant People—in Hopi, Anu Sinom . The Ant People then escorted the Hopi into subterranean caves where they found refuge and sustenance.”
Stories that giants and other strange beings have lived deep inside the Earth are seen around the globe. In the Hopi legend, these beings were benevolent and helped the tribe even to their own detriment.
“In this legend, the Ant People are portrayed as generous and industrious, giving the Hopi food when supplies ran short and teaching them the merits of food storage. In fact, another legend says that the reason why the ants have such thin waists today is because they once deprived themselves of provisions in order to feed the Hopi.”
The thin waisted ants with their elongated heads and antennae resemble some of the ancient petroglyphs. Across the globe, an African species of Ant called the Pharaoh Ant remind some of a tiny version of Pharoah Akhenaten, famous for his strange alien appearance.

Pharoah Ant, Monomorium pharaonis via Wikimedia Commons CC BY 4.0 by http://www.AntWeb.org
The History Channel’s Ancient Aliens series covers this subject in Series 4, episode 9 (See a clip below). In addition to depictions of the Ant People are wall paintings that show an unmistakable similarity to cuneiform symbols from ancient Sumeria. These symbols are associated with the “WingMakers,” according to the show.

Just as in ancient Egypt, there were matriarchal dynasties, DNA findings from Chaco Canyon show a possible maternal dynasty that ruled for hundreds of years between A.D. 800 and 1250. Scientific American published a story on this in 2017 after researchers examined the remains of 14 people found a burial crypt that ended up at the American Museum of Natural History in New York.
Related: Will the Natural History Museum ever release DNA test results for Queen Puabi?
The Chaco Canyon settlement had thousands of Anasazi inhabitants, who believed in protecting Mother Earth. However, the ancient Puebloans mysteriously disappeared, along with any signs of the Ant People. Today researchers believe that climate change drove them away as the growing population couldn’t sustain itself.
The Anasazi integrated with tribes like the Hopi, Zuni, and Rio Grande Pueblo. As the modern world faces extreme challenges from climate change today, the teachings of these tribes are more important than ever. Can we learn to respect the natural world and live in harmony with Mother Earth? Or are we headed for inevitable disasters, like those described in the Hopi legends?
Ancient Astronaut theorists often speculate if extraterrestrial beings could play a part in helping humans overcome impending future disasters. In the case of the Hopi legends, it appears they did just that. Could the Ant People return from deep in the Earth or from their home in the stars in our time of need?
For another Hopi origin story watch this beautiful video from PBS:

OUT OF MIND » TRUTH IN CONSPIRACY THEORIES? » HISTORIES MYSTERIES » Ant People Legend of the Hopi Native Americans & Connections to the Anunnaki