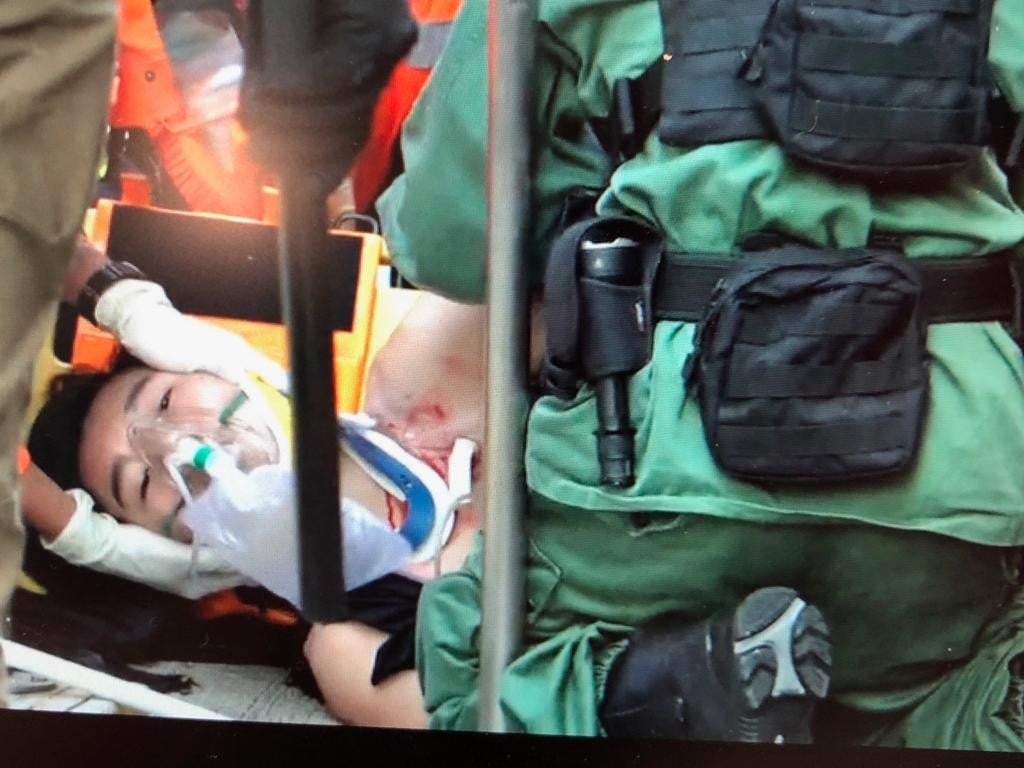 Source:  Reuters
HONG KONG, Oct 1 (Reuters) – Hong Kong police fired tear gas and rubber bullets at pro-democracy protesters throwing petrol bombs in the Asian financial hub on Tuesday as its Chinese rulers celebrated the 70th anniversary of the founding of the People’s Republic.
Cat-and-mouse clashes spread from the upmarket district of Causeway Bay to the Admiralty area of government offices on Hong Kong island. Violence also escalated across the harbour to Kowloon and beyond to the New Territories in the most widespread unrest in nearly four months.
The South China Morning Post and television reports said at least one person was wounded in the chest by police firing live rounds. Police did not respond to requests for comment but have said they fired live rounds into the air in previous clashes.
Video footage of a police officer firing at a protester at close range went viral, but there was not immediate verification of its authenticity.
Fifteen people were wounded across the territory, one critically, the Hospital Authority said without giving details.
Police fired water cannon and volley after volley of tear gas to disperse protesters throwing Molotov cocktails outside central government offices in the Admiralty area and ordered the evacuation of the Legislative Council building next door.
Police said “rioters” had used corrosive fluid in Tuen Mun in the west of the New Territories, “injuring multiple police officers and reporters”. No details were immediately available.
The territory has been tense for weeks, with protests often turning violent, as authorities tried to avoid activists spoiling Beijing’s birthday parade at a time when the central government is already grappling with a U.S.-China trade war and a slowing economy.
Report this ad
Report this ad
By the afternoon, police and protesters were involved in standoffs across Hong Kong, with the streets littered with tear gas canisters and other debris.
Nearly four months of street clashes and demonstrations have plunged the former British colony into its biggest political crisis in decades and pose the most serious popular challenge to President Xi Jinping since he came to power.
Earlier, thousands of black-clad protesters, some wearing Guy Fawkes masks, marched from Causeway Bay toward government headquarters in Admiralty, defying a ban on a rally.
Rail operator MTR Corp shut down many of its metro stations to stop protesters moving around. Shutting stations have made them a common target for attack, and a fire was lit at Admiralty station on Tuesday.
Protesters had vowed to seize the opportunity on China’s National Day to propel their calls for greater democracy onto the international stage, hijacking an occasion Beijing sees as an opportunity to showcase China’s economic and military progress.
“I’m not young, but if we don’t march now, we’ll never have the chance to speak again, it’s as simple as that,” said one marcher near Causeway Bay, a 42-year-old woman with her own logistics company who identified herself as Li.
Hundreds of officials and members of Hong Kong’s pro-establishment elite began the day with a flag-raising ceremony and National Day reception at the Convention and Exhibition Centre, held early and moved behind closed doors. Roads to the centre were closed and tightly policed.
Hong Kong had benefited from China’s support under the “one country, two systems” policy, Acting Chief Executive Matthew Cheung told the assembly, referring to guarantees of political freedoms after the city’s handover from British to Chinese rule in 1997.
But he said escalating violence was disrupting social order and hurting the economy.
The government of embattled leader Carrie Lam has already cancelled an annual Oct. 1 fireworks display over the city’s Victoria Harbour, citing public safety.
Lam, who was trapped in a stadium for hours last week after attending the “open dialogue”, left for Beijing on Monday to celebrate China’s birthday on the mainland. She will return on Tuesday.
CHOREOGRAPHED FESTIVITIES
In contrast to events in Hong Kong, Beijing’s carefully choreographed anniversary festivities included troops marching through part of Tiananmen Square with new missiles and floats celebrating the country’s technological prowess.
Lam was shown on television smiling as a float celebrating Hong Kong went past as she sat with Chinese officials.
The Communist Party leadership is determined to project an image of national strength and unity in the face of challenges including Hong Kong’s unrest.
“On our journey forward, we must uphold the principles of peaceful reunification and one country, two systems; maintain lasting prosperity and stability in Hong Kong and Macau … and continue to strive for the motherland’s complete reunification,” Xi said in a nationally televised speech in Beijing.
Hong Kong protesters are angry about what they see as creeping Chinese interference in the Asian financial centre.
China dismisses the accusation and has accused foreign governments, including the United States and Britain, of fanning anti-China sentiment. (Reporting by Jessie Pang and Donny Kwok, Additional reporting by Sharon Tam, Poppy McPherson, Anne Marie Roantree, Farah Master, James Pomfret, Twinnie Siu, Alun John, David Kirton, Jennifer Hughes and Keith Zhai Writing by Clara Ferreira Marques, Bill Rigby and Nick Macfie Editing by Lincoln Feast, Robert Birsel and Raju Gopalakrishnan)