An international team of archaeologists has found a collection of microliths — small, retouched, often-backed stone tools — at the cave site of Fa-Hien Lena in the tropical evergreen rainforests of Sri Lanka. Some of these microliths are 45,000 years old and represent the earliest evidence of such advanced technology in South Asia. 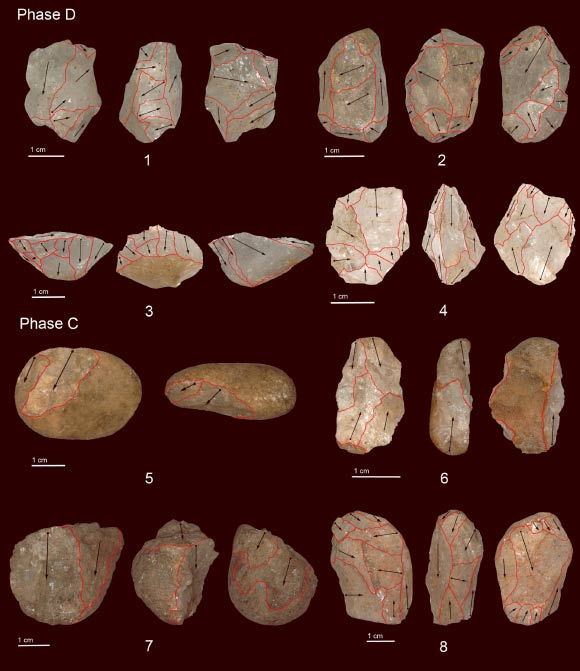 Cores from Phase D (48,000-34,000 years ago) and Phase C (13,000-12,000 years ago) of Fa-Hien Lena Cave, Sri Lanka: bipolar core (4, 5, 6), bipolar orthogonal core (1, 2, 7, 8), unidirectional abrupt core (3). Image credit: Wedage et al, doi: 10.1371/journal.pone.0222606.
“We undertook detailed measurements of stone tools and reconstructed their production patterns at the site of Fa-Hien Lena Cave, the site with the earliest evidence for human occupation in Sri Lanka,” said Dr. Oshan Wedage, a researcher at the Max Planck Institute for the Science of Human History.
“We found clear evidence for the production of miniaturized stone tools or microliths at Fa-Hien Lena, dating to the earliest period of human occupation.”
Microliths are considered to be the product of composite weapons produced by cultures with advanced strategies for hunting and thriving in challenging environments.
Such tools are known from Paleolithic sites in Europe, but this is the oldest microlith assemblage in South Asia and the oldest known from a rainforest environment.
Dr. Wedage and colleagues collected 9,216 artifacts, including 1,730 artifacts older than 34,000 years.
The dominant raw material used at Fa-Hien Lena is quartz. River pebbles with smooth surfaces were most likely gathered from the stream located 200 m from the site.
“These tools were likely part of composite projectile technology used to hunt and capture tree-dwelling prey, though more research will be needed to confirm their exact functions,” the study authors said.
The similarity of Fa-Hien Lena technology to that of local cultures as recent as 4,000 years old reflects a long-term stability in rainforest technology in the region.
“The lithic technology of Fa-Hien Lena changed little over the long span of human occupation (from 48,000-45,000 years ago to 4,000 years ago) indicating a successful, stable technological adaptation to the tropics,” the scientists said.
“Microliths were clearly a key part of the flexible human ‘toolkit’ that enabled our species to respond — and mediate — dynamic cultural, demographic, and environmental situations as it expanded over nearly all of the Earth’s continents during the Late Pleistocene, in a range currently not evident among other hominin populations,” they concluded.
The findings appear online in the journal PLoS ONE.
_____
O. Wedage et al. 2019. Microliths in the South Asian rainforest ~45-4 ka: New insights from Fa-Hien Lena Cave, Sri Lanka. PLoS ONE 14 (10): e0222606; doi: 10.1371/journal.pone.0222606