California residents are outraged after being left in the dark by PG&E.
Two people have died in California as wildfires continue to rage out of control Friday in the greater Los Angeles area, forcing the mandatory evacuations of people in more than 20,000 homes.
Los Angeles Fire Chief Ralph Terrazas said the fire along the northern edge of the city has grown to more than 7 square miles and has destroyed at least 25 homes. A middle-aged man who was near where the fire was burning went into cardiac arrest Thursday night and died, the chief added.

SYLMAR, LOS ANGELES (KABC) — One person died in connection to an aggressive brush fire that broke out in Sylmar late Thursday night, leaving over 4,700 acres scorched and prompting mandatory evacuation orders for 25,000 homes as flames ripped through residential areas.
Officials held a press conference on the Saddleridge Fire Friday morning, in which they reported a man died of cardiac arrest as a result of the wind-driven blaze. A firefighter suffered a “minor” eye injury and was transported to an area hospital for treatment. At least 25 homes were destroyed in the whipping inferno, with the greatest area of impact on homes lost in Porter Ranch, Los Angeles fire officials said.
MORE: Saddleridge Fire: Massive flames lap up against Porter Ranch homes 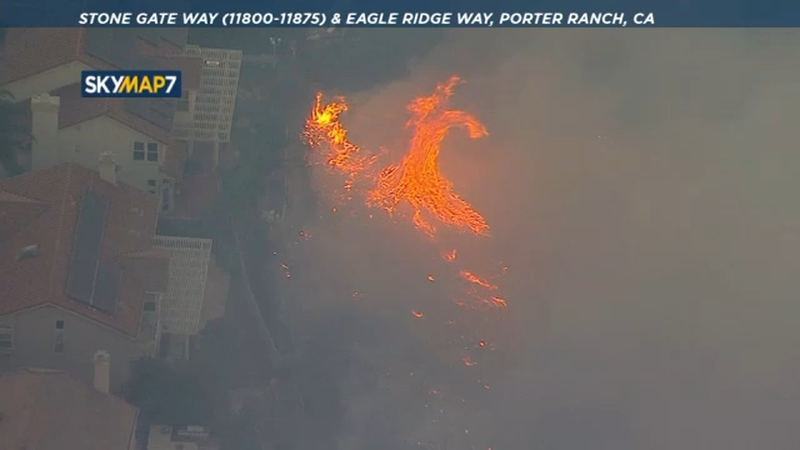 Massive flames were seen lapping up against fenced homes in Porter Ranch Friday morning, as daylight revealed the extent of damage done by the unrelenting Saddleridge Fire.
Officials stressed that the biggest concern was ensuring homeowners heed evacuation warnings. Los Angeles police said 25,000 residences were under mandatory evacuations, impacting about 100,000 people.
One man said he was awoke by his wife around 1 a.m. as flames threatened their home.
“We could look out our window, and we could see the flames, just like over the hill. Shortly thereafter, the LAPD was on our street, using their bullhorns, telling us you guys have mandatory evacuations, you gotta get out,” he said.
MORE: Time lapse shows fast-moving Saddleridge Fire burning hillside in northern San Fernando Valley 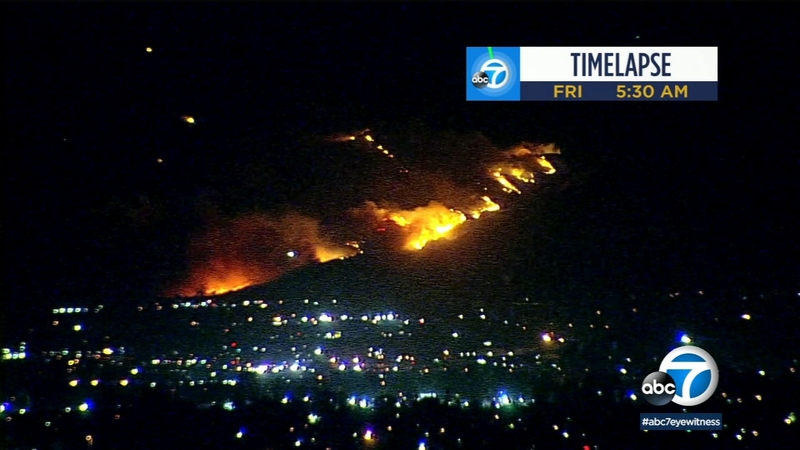 A time lapse video shows the fast-moving Saddleridge Fire scorching a hillside in the Porter Ranch area, capturing the blaze’s path of destruction over just a few hours.
The fire erupted shortly before 10 p.m. near the westbound 210 Freeway near Yarnell Street, according to the Los Angeles Fire Department. A couple of hours after the fire started, flames jumped the 5 Freeway into Granada Hills and Porter Ranch, where some homes burned, said LAFD Chief Dep. Al Poirier.
MORE: Saddleridge Fire evacuations, road and school closures
The blaze, which is burning at 800 acres per hour, is currently 0% contained. The cause of the devastating fire remains under investigation.
The 210 Freeway was shut down in both directions between the 5 and 118 freeways, according to the California Highway Patrol.
MORE: Flames engulf Porter Ranch homes 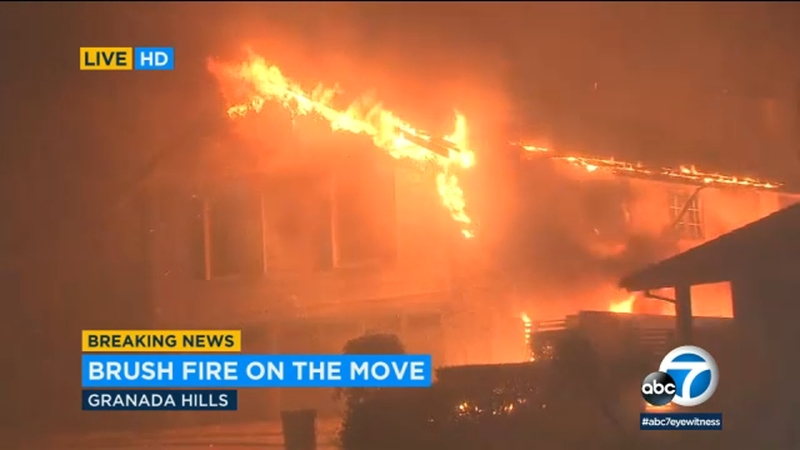 Multiple homes were seen engulfed in flames in Porter Ranch as the Saddleridge Fire raged.
Mandatory evacuation orders were in effect in the following areas:
ALL of Porter Ranch (north of 118 Freeway) from Reseda to De Soto.
The Oakridge Estates community north of the 210 Freeway.
West of Balboa, North of Sesnon to the Ventura County border with DeSoto as the western border.
MORE: Hillsides near Porter Ranch parks go up in flames 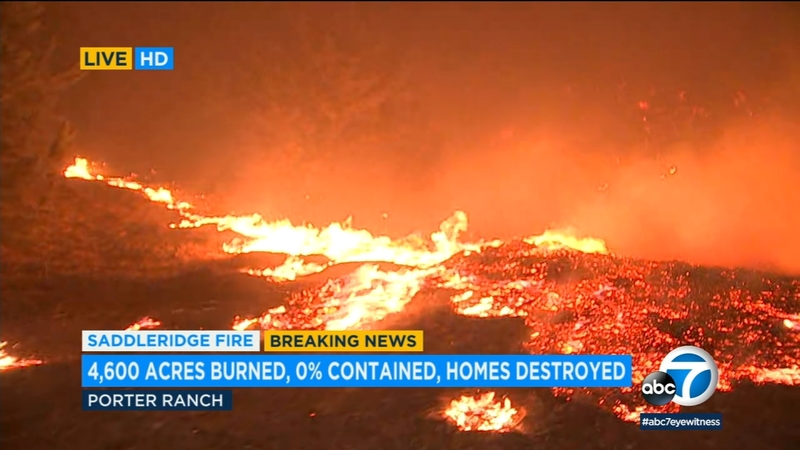 Dry brush near Porter Ranch parks went up in flames as the massive Saddleridge Fire showed no signs of slowing down Friday morning.
About 1,000 LAFD personnel and supporting crews were on scene battling the blaze, deemed a “Major Emergency” incident by LAFD, the highest classification there is for a fire emergency. Los Angeles and Kern county crews were in unified command for the incident. LAPD also had 200 uniformed personnel assigned to the fire.
The Los Angeles Department of Water and Power shut down power along major transmission lines and rerouted the power source to avoid any outages. Still, about 2,500 LADWP customers were without power in Sylmar and Granada Hills with an unknown time for restoration.
A separate spot fire broke out after strong winds in the area picked up some embers that traveled a few miles and ignited on the westside of the 5 Freeway near Granada Hills. Those flames rapidly erupted to at least 30 acres, west of Balboa Boulevard and San Fernando Road.