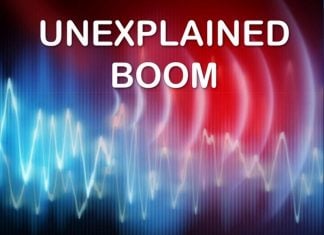 A dozen Mount Vernon residents called 911 on Sunday night saying they heard a loud bang, according to 911 calls obtained by Knox Pages. But 24 hours later, local authorities still have no idea where the noise came from.
Most of the calls came from the north end of town, near the five-point intersection off North Main Street. Some came from the neighborhood surrounding Pleasant Street Elementary, however, which is almost a mile away. Callers from all locations claimed the source of the noise must be nearby, given how loud it was.
Mount Vernon police officers were dispatched to the call areas at 8:15 p.m. Sunday, department spokesperson Matt Haver said. But they were unable to find the source of the bang, and the police department is not conducting an investigation into the matter.
Those who reported the loud boom on Sunday night seemed scared and confused. A woman calling from North Mulberry Street seemed to tremble as she described a “loud explosion.” A man calling from West Curtis Street said it “shook the hell out of our house,” and a woman calling from East Burgess Street said she had retreated indoors, in case it was a gunshot.
“It was the kind of boom like if you’re very, very close to fireworks,” the caller said.
One woman, calling from Mansfield Avenue, said residents of a nearby apartment building came outside after the bang to see what had happened. Another woman, calling from the same area, classified the noise as “way louder” than a car backfiring.
“It seemed like it was right behind me,” she said.
Almost a mile away, a woman at the intersection of East Burgess Street and Division Street shared a similar experience.
“It was just one loud bang,” she told dispatch. “It sounded really close.”
Some 911 callers suggested it may have been a blown transformer. AEP spokesperson Scott Fuller said that after looking through work reports from Sunday and Monday, he could not find any transformer-related calls from the Mount Vernon area. Mount Vernon fire chief Chad Christopher added that his department had not received any calls concerning a blown transformer or a fallen wire.
Other callers suggested it may have been a car crash. According to 911 records, no major car crashes occurred in Knox County on Sunday evening.
When asked to describe the noise, most callers likened it to a gunshot or an explosion. One woman reported two noises, with the second being louder than the first.
City Safety Service Director Joel Daniels, an East Chestnut Street resident, said he was in his living room when he heard the noise on Sunday night.
“I heard what sounded like a high-powered gunshot to me,” he said. “I stepped out on my front porch just to see if there was anything more going on.”
While Daniels had received calls from residents on Monday about the bang, he knew nothing about its origin. He wondered if an incident had occurred on the vacant Siemens property, given its proximity to the north end of town. Jeff Gottke, vice president of the Area Development Foundation – which is headquartered across the street from the Siemens property and is actively involved in marketing the industrial site – said this was not the case.
Rumors have circulated on Facebook since the noise was first reported on Sunday night. Some local users believe a firecracker may have caused it.
While several residents living near Pleasant Street Elementary called 911 about the noise on Sunday evening, principal Teresa Weaver said Monday that “she had heard nothing of a loud bang, nor did it impact the school day.
“None of my staff or students spoke of it today, to my knowledge.”
Grant Pepper
Knox Pages