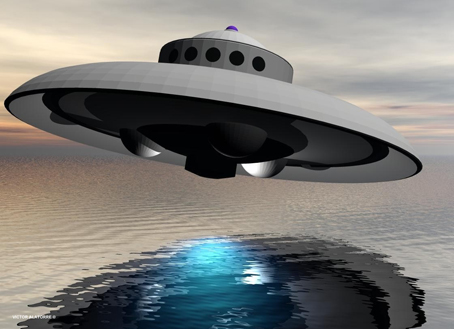 In September, the US Navy confirmed that three videos possibly showing “Tic-Tac”-shaped UFOs were of an “unauthorised and unidentified” nature. This has encouraged a new wave of revelations from naval officers who were involved in the matter.
Former Navy officer Ryan Weigelt, who was on board the USS Princeton when fighter pilots famously encountered a “Tic Tac”-shaped UFO near the coast of San Diego in 2004, has opened up about a group of mysterious officials boarding the ship to retrieve some secret information following the incident.
On 14 November 2004, US fighter pilots of the Nimitz Carrier Strike Group encountered an unidentified flying “Tic Tac”-shaped object that was filmed and revealed to the public in 2017 under the title “FLIR1”.
The footage was released alongside two other videos titled “Gimbal” and “GoFast”, which were captured in January 2015. All three videos were acquired by former Pentagon official Luis Elizondo and released by To The Stars Academy of Arts and Science, a UFO research organisation founded by Blink-182 singer Tom DeLonge.

Lead Petty Officer Weigelt, who worked as a helicopter maintenance training instructor at the USS Princeton that was a part of larger group including the USS Nimitz, said in an interview with The Nimitz Encounters YouTube channel, hosted by Dave Beattie, that shortly after the fighter jets spotted the mysterious object, a group of military personal from the US Air Force landed on his ship without assignment.
They then allegedly went straight to the Admiral’s Quarter and retrieved some details from helicopters located on the USS Princeton, without which the aircraft were unable to fly.
“I couldn’t tell you what it was they had taken”, said former officer. “But it was something that meant we couldn’t fly our aircraft until we got them back”.
“There was something that they had taken off our aircraft that, whatever box it was, they logged it out and it was directed by a higher authority to take it”, he added. “There was no way we could safely fly our aircraft in a battle group”.
Weigelt then revealed that the group of mysterious officials ordered the USS Princeton to harbour at a nearby marina, which was seen as something unprecedented, while leaving the missile cruiser by an RIB (rigid-hulled inflatable boat).
“I’ve done a lot of cruises in my time in the military and never once did we pull in during a work-up to a harbour for any reason whatsoever”, the lead petty officer said.
“There’s no doubt in my mind that these guys were looking for data on the UFOs”, the former naval officer concluded.
In mid-September, US Navy spokesman Joseph Gradisher confirmed for the first time that the videos of the “Tic Tac”-shaped object circulating on the Internet really showed “unidentified phenomena”.
SputnikNews

» Like RATS jumping SHIP! Administration officials scurry—
» Did you know ? — 22 members of Navy SEAL Team 6 died shortly after their “alleged” kill of Osama Bin Laden
» Navy Admits that Fleet of Tiny UFO’s Swarmed US Navy Off San Diego
» The Alleged Pedo & the Alleged Sex Trafficker are Teaming Up! #HILLARY4PRISON
» If Flint officials are now charged with tampering with evidence and hiding proof of harm, when will CDC officials be prosecuted over mercury in vaccines?