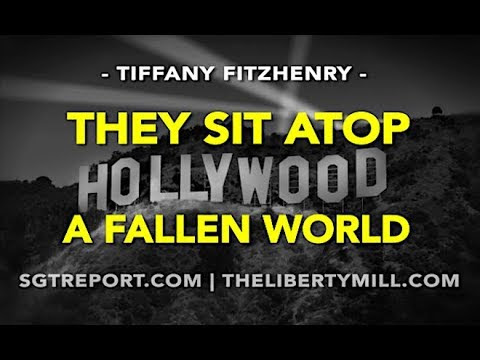 
Author, Screenwriter, YouTuber and Hollywood whistleblower, Tiffany FitzHenry joins Sean on the SGT Report to discuss our Great Awakening to the fact that all of the high profile actors, musicians, journalists, CEOs and politicians are agents of controlled influence manufactured and elevated to control culture and distract the masses.
“These people existed at the top of a fallen world, so everything they had to do to get to the top of a fallen world was bad. It’s not like they’re at the top of a righteous world. They literally had to be the worst of the worst. So, it’s gonna get ugly.”
Once you read her éxposés, you will never look at a Hollywood celebrities – or almost anyone in power – the same way again. You will see them as these incomprehensibly pathetic people who have won the Sell-Out Olympics.
FitzHenry has been doing incredible work on the CIA-Hollywood connection, revealing how the Deep State controls the major players in Hollywood and makes them their agents of influence.
As she explains, “Politics is downstream from culture. In order to influence politics, people who know what they’re doing start with culture. Influence on popular culture is what they want. By influencing culture, you influence the world.”
She recently wrote a mind-blowing two-part series on George Clooney, in which she “sliced open and revealed the slimy guts of the putrid rotten practice of appointing Hollywood celebrities as United Nations ‘Messengers for Peace’ and ‘Goodwill Ambassadors’ for the maggot covered decomposing deception it is. A slimy trick used by the global elite establishment in order to whitewash the war-making, raping, pillaging and plundering they do through the multinational corporations, at the altar of which the likes of Clooney worship.”
Clooney is a member of the Council on Foreign Relations, “an elite power structure, filled with unelected journalists and Hollywood and Silicon Valley shills who in lock step with the State Department make foreign policy decisions, completely outside the purview and checks and balances of the democratic process…
“Clooney and company are not the good guys. They are the warmongering military industrial complex, owned by the soulless elite cabal, all disguised as humanitarians by lovely sounding NGOs. And like the good little cabal puppet Clooney has become, what’s he doing now? Why he’s founding NGO after NGO after NGO.”
He even donated $1 million to combat corruption in Africa – donating to his own charity. “A very ‘Clinton’ move,” says FitzHenry.
Clooney has long been tight with the Clintons, as revealed in 1,507 Sony emails and documents that mention him by name, 276 Stratfor files that mention him by name, 98 DNC emails that mention him and in 26 Podesta emails.
This makes it all the more interesting that his wife, human rights lawyer Amal Alamuddin Clooney was on Julian Assange’s defense team – until WikiLeaks’ release of the Podesta emails.
FitzHenry is a very spiritual person. She says, “You don’t know true joy until you see something that’s real. And we’ve had a fake world…Everything we’ve had has been fake. Fake idols. Fake movie stars. Fake this, fake that. [We find out] they’re actually CIA, they’re actually Deep State, fake journalists.
“How great is it going to be to have real journalism? On a big level, to where we know corruption has no place, because we know it’s going to get found out…we’re going to know the difference. The whole world’s going to know the difference.
“It’s exciting to think about! To know that everything coming out of Hollywood’s been so masterfully manipulated, filled with agendas, tightly-controlled…to me, it’s exciting to think, for all of this that we’ve gone through and how terrible awakening really is; it’s very hard…but the gift we’re going to get on the other side is going to be that…new world.
“So much joy, so much love, so much purity, everywhere we look. Even the food will be amazing because everything is going to be exposed.”