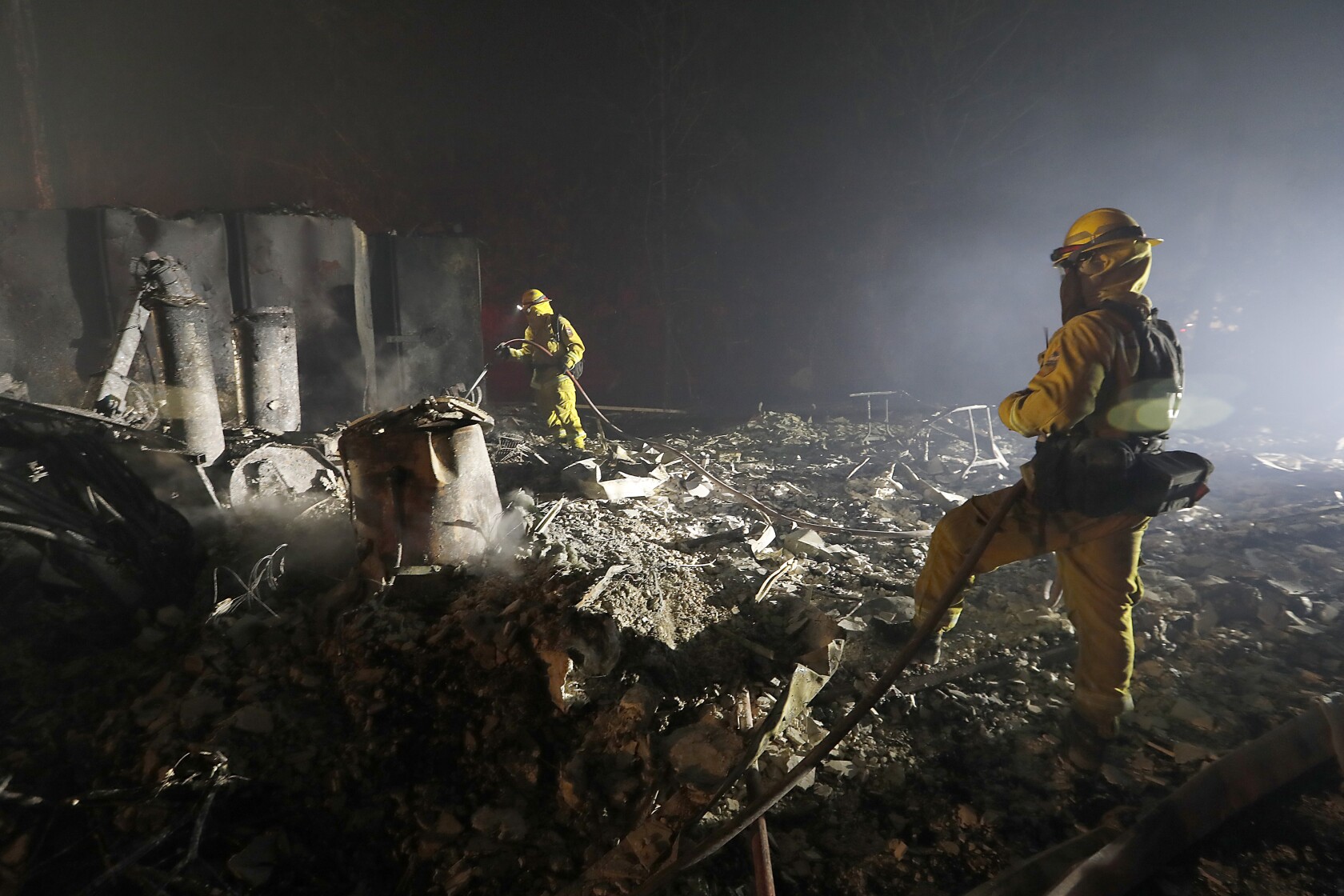 Fueled by violent winds from the northeast, fires erupted on dry hills across California, tearing through oaks and vineyards in Sonoma County and burning homes hundreds of miles away in subdivisions near Santa Clarita.
The extreme weather conditions will continue into this weekend, heightening both the fire threat and the likelihood of more widespread power outages as utilities try to prevent electrical lines from sparking more blazes.
As the winds swept into California on Wednesday night, an eruption of fires big and small followed: first Northern California wine country, then San Bernardino, Orange County, Marin County, Santa Clarita, Eagle Rock and the San Fernando Valley. Firefighters were able to control some while others exploded out of control.
The Kincade fire started Wednesday night and consumed more than 16,000 acres of northern Sonoma County, pushed by wind gusts higher than 70 mph and forcing the evacuation of Geyserville and other parts of the famed Alexander Valley wine region and burning about 50 structures..
“If you’re in Geyserville, leave now,” the Sonoma County Sheriff’s Office said in an advisory Thursday morning.
Pacific Gas & Electric Co. had shut off power to thousands because of dangerous wind conditions.
It’s unclear whether utility lines played a role in the Sonoma County blaze, but an incident report from PG&E said a transmission line failure occurred near Kincade and Burned Mountain roads at 9:20 p.m. Wednesday, around the time the fire was first reported. In a mandatory report sent to the California Public Utilities Commission, the company said one of its workers noticed Thursday morning that the California Department of Forestry and Fire Protection had taped off the area. PG&E said Cal Fire also pointed out a “broken jumper on the same tower.”
PG&E said distribution lines in Geyserville and the surrounding area were shut down at 3 p.m. Wednesday but transmission lines remained energized.
“Those transmission lines were not deenergized because forecast weather conditions, particularly wind speeds, did not trigger the PSPS [public safety power shut-off] protocol,” PG&E said in a statement. “The wind speeds of concern for transmission lines are higher than those for distribution.”
Read More

Re: UPDATES - Fires explode across California, from wine country vineyards to Southern California subdivisions plus MORE Sun Oct 27, 2019 10:24 am

Re: UPDATES - Fires explode across California, from wine country vineyards to Southern California subdivisions plus MORE Sun Oct 27, 2019 10:25 am 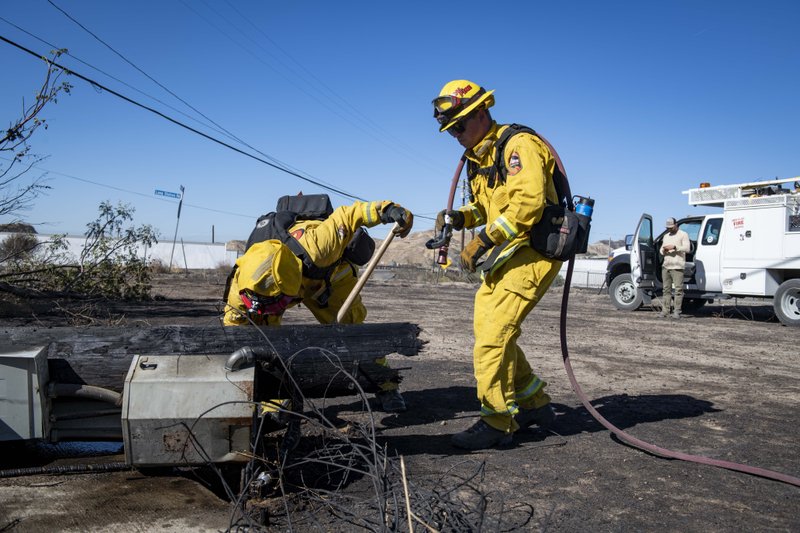 SAN FRANCISCO (AP) — A wildfire in California wine country that may have been caused by a high-voltage transmission line called into question Pacific Gas & Electric’s strategy of selectively cutting off power in windy weather to prevent blazes and could force it to resort to even bigger blackouts affecting millions as early as this weekend.
The repeated shut-offs and the prospect of longer and more widespread ones brought anger down on the utility from the governor and ordinary customers.
“We will hold them to account,” warned Gov. Gavin Newsom, who has repeatedly blasted PG&E — the nation’s largest utility — for what he calls years of mismanagement and underinvestment that have left its grid less resilient.
Twice over the past two weeks, PG&E has cut power to large areas of northern and central California to reduce the risk of its equipment sparking fires. Nearly 2 million people lost electricity earlier this month, and then as many as a half-million this week.
But PG&E’s decision to shut down distribution lines but not long-distance transmission lines may have backfired this time when a blaze erupted near the Sonoma County wine country town of Geyserville.
The fire burned at least 49 buildings and 34 square miles (65 square kilometers) and prompted evacuation orders for some 2,000 people. No serious injuries were reported. 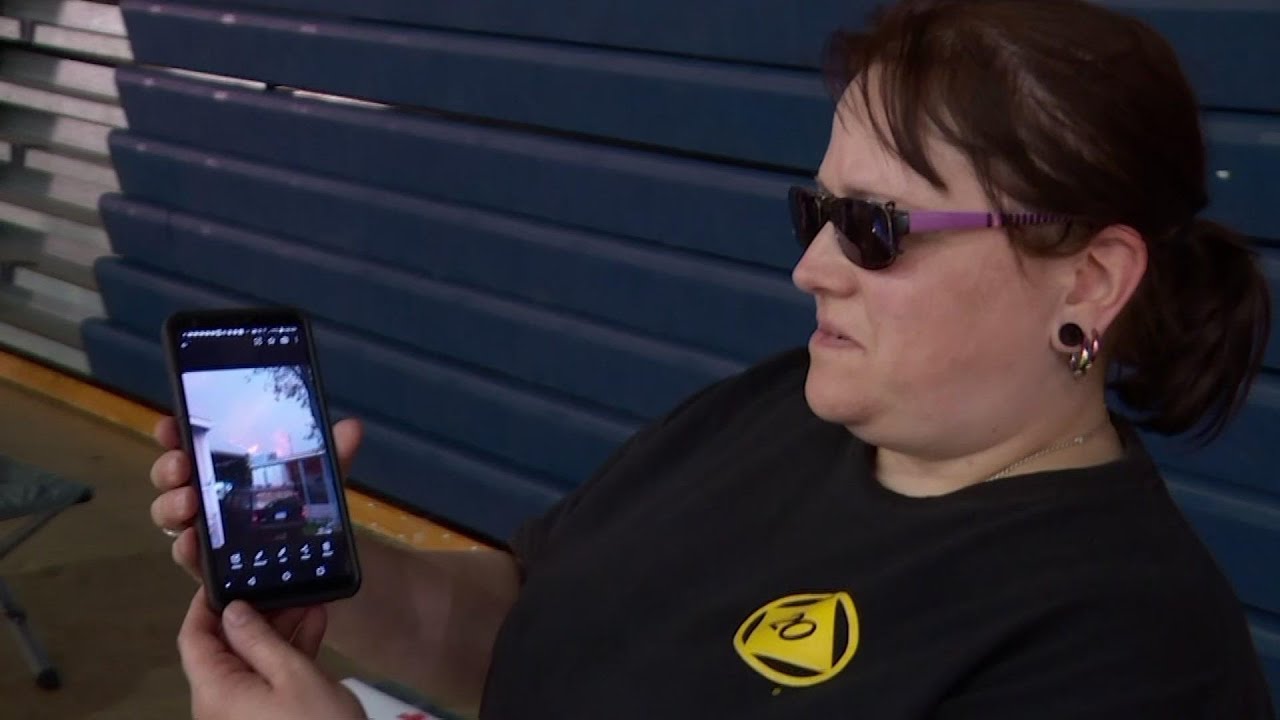 Report this ad
PG&E said a live, 230,000-volt transmission line near Geyserville had malfunctioned minutes before the fire erupted Wednesday night, and a broken “jumper” wire was found on a transmission tower.
PG&E Corp. CEO Bill Johnson said it was too soon to say whether the faulty equipment sparked the fire. He said the tower had been inspected four times in the past two years and appeared to have been in excellent condition.
But PG&E stock plummeted 31 percent on the news. And the blaze could mean wider blackouts ahead.
“It’s kind of a logical next step to say, ‘Well, if our high-voltage transmission lines are at risk, we’ve got to shut those down too,’” said Alan Scheller-Wolf, professor of operations management and an energy expert at Carnegie Mellon University.
PG&E, he said, “can’t win.”
The utility acknowledged that the discovery of the tower malfunction already had prompted a change in its strategy.
“We have revisited and adjusted some of our standards and protocols in determining when we will de-energize high-voltage transmission lines,” Andrew Vesey, CEO of Pacific Gas & Electric Co., said at a briefing Friday night.
With dangerously high winds in the forecast this weekend, the utility said it is planning another major shutdown that could hit more than 2 million people throughout the region starting Saturday afternoon and last up to two days.
The preparations came as firefighters simultaneously battled flames in both Northern and Southern California: the fire amid Sonoma County’s vineyards, and a wind-whipped blaze that destroyed at least six homes in the Santa Clarita area near Los Angeles and led to evacuation orders covering an estimated 50,000 people.
The possible link between the wine country fire and a PG&E transmission line contained grim parallels to the catastrophic fire last year that tore through the town of Paradise, killing 85 people and destroying thousands of homes in the deadliest U.S. fire in a century. State officials concluded that fire was sparked by a PG&E transmission line.
The line that failed this week is newer and should have been more robust, said Michael Wara, director of the climate and energy program at Stanford University. Its failure will probably make PG&E more cautious, which means more widespread blackouts, he said.
“There’s going to be more collateral damage,” Wara said.
Turning off big transmission lines reduces the stability of the electrical grid, leading to bigger outages, Wara said. Transmissions lines also take longer to re-energize because everything connected to them must be inspected, he said.
PG&E’s CEO has said it will take about a decade before widespread outages aren’t necessary.
Minimizing blackouts will require PG&E to harden its grid with stronger poles and newer equipment less likely to fall or spark. Cameras, weather sensors and a more segmented grid would allow the company to target blackouts to areas in the most danger.
PG&E began resorting to large-scale shut-offs after its equipment was blamed for several blazes in recent years that killed scores of people, burned thousands of homes and ran up billions of dollars in claims that drove the utility into bankruptcy, where it is still trying to put its finances in order.
The repeated and sometimes lengthy blackouts have frustrated Californians contending with uncertainty, spoiled food and disrupted plans. Many have complained about poor communication from the power company.
“I feel like we’re being held hostage for their failings and their incompetence,” said Logan Martin, 55, of Santa Rosa.
This year’s fire season in California has so far been mild, with fewer deaths and fewer acres burned following two years of deadly conflagrations.
Experts say it is impossible to know how much the blackouts contributed to that, but PG&E has cited numerous instances of wind damage to its equipment that it said could have caused fires if the lines had been electrified.
Losing power doesn’t put a huge burden on firefighters, but they need to know outages are coming so they can install generators where needed, such as pumps for retardant, said Thom Porter, chief of the California Department of Forestry and Fire Protection.
Firefighters sometimes draw water from rural water systems that use electrical pumps, but there have been no reports of problems getting water to fight either of the major blazes burning in California now.
___
This story has been corrected to show that nearly 2 million people lost electricity earlier this month, not 2.5 million.
___
Cooper reported from Phoenix. Associated Press writers Jocelyn Gecker and Juliet Williams in San Francisco and Stefanie Dazio in Los Angeles contributed.