OUT OF MIND » PERCEPTUAL AWARENESS » POWER TOOLS » SACRED GEOMETRY: The Universe Is Made of Tiny Bubbles Containing Mini-Universes, Scientists Say

SACRED GEOMETRY: The Universe Is Made of Tiny Bubbles Containing Mini-Universes, Scientists Say

SACRED GEOMETRY: The Universe Is Made of Tiny Bubbles Containing Mini-Universes, Scientists Say Mon Oct 28, 2019 10:02 am 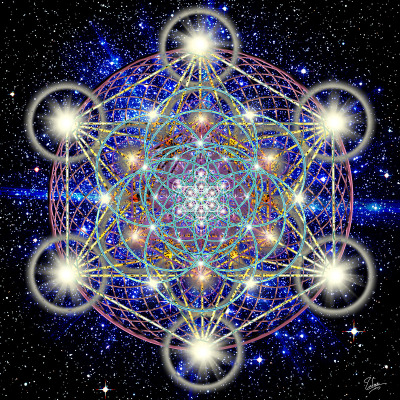 SACRED GEOMETRY: The Universe Is Made of Tiny Bubbles Containing Mini-Universes, Scientists Say

Source – vice.com
– “…Authors Qingdi Wang and William G. Unruh at the University of British Columbia suggest that every point in spacetime cycles through expansion and contraction, like tiny versions of our universe. Every point in spacetime, they say, is a “microcyclic universe”, endlessly moving from singularity, to a Big Bang, and finally collapse, on repeat”
The Universe Is Made of Tiny Bubbles Containing Mini-Universes, Scientists Say
A persistent cosmological puzzle has been troubling physicists since 1917: what is the universe made of?
Complicating this already-mind-boggling question is the fact that our best theories conflict with our observations of the universe. Albert Einstein, according to scientific folklore, felt a unique responsibility for introducing this entire problem, reportedly referring to it as his “biggest blunder.”
Essentially, Einstein’s novel theory of general relativity didn’t hold up when used to describe the universe as a whole. General relativity described the “geometry” of spacetime as being a trampoline-like surface; planets are heavy bowling balls that distort the surface, creating curves. If a less heavy ball (like a marble) was placed near the bowling ball, it would roll along the surface just like the motion of planets in orbit. Thus, orbits are explained not by a gravitational “force” but by curvature in spacetime.
This proposal worked when considering small regions of spacetime. But when Einstein applied it to the entire universe, its predictions didn’t fit. So, Einstein introduced the “cosmological constant,” a fixed value that represents a kind of anti-gravity, anti-mass, and anti-energy, counteracting gravity’s effects. But when scientists discovered that the universe was expanding rather than static, as Einstein had believed, the cosmological constant was set to zero and more or less ignored. After we learned that the universe’s expansion is accelerating, however, scientists could no longer conveniently cancel out Einstein’s anti-gravity suggestion.
What was previously assumed to be empty space in the universe now had to be filled with huge amounts of mysterious anti-energy in order to explain observations of the universe’s ever-quickening expansion. Even so, observations of the universe’s expansion suggest that the energy is 60 to 120 orders of magnitude lower than what recent quantum field theory predicts.
What this means is that all of this extra energy is somehow missing when we look at the universe as a whole; either it’s effectively hidden or very different in nature to the energy we do know about.
Today, theoretical physicists are trying to reconcile these mysteries by examining the structure of so-called “spacetime” in the universe at the smallest possible scale, with surprising findings: spacetime might not be the trampoline-like plane scientists once envisioned—it might be a foamy mess of bubbles all containing mini-universes living and dying inside our own.
What is spacetime foam?
To try and solve the mystery of what fills the universe, scientists have been exploring the possibility that it’s actually full of bubbles.
In 1955, influential physicist John Wheeler proposed that, at the quantum level, spacetime is not constant but “foamy,” made up of ever-changing tiny bubbles. As for what these bubbles are “made” of, recent work suggests that spacetime bubbles are essentially mini-universes briefly forming inside our own.
The spacetime foam proposal fits nicely with the intrinsic uncertainty and indeterminism of the quantum world. Spacetime foam extends quantum uncertainty in particle position and momentum to the very fabric of the universe, so that its geometry is not stable, consistent, or fixed at a tiny scale.
Wheeler illustrated the idea of spacetime foam using an analogy with the surface of the ocean, as retold by theoretical physicist Y. Jack Ng at the University of North Carolina, Chapel Hill, in an email:
Imagine yourself flying a plane over an ocean. At high altitudes the ocean appears smooth. But as you descend, it begins to show roughness. Close enough to the ocean surface, you see bubbles and foam. Analogously, spacetime appears smooth on large scales; but on sufficiently small scales, it will appear rough and foamy
Professor Steven Carlip at University of California, Davis, published new research in September that builds on Wheeler’s quantum foam theory to show that spacetime bubbles could “hide” the cosmological constant at a large scale.
“There are so many different proposals [to solve the cosmological constant problem], and a good sign for my research is that none of them is very widely accepted,” Carlip said in an interview. “I thought it was worth looking for an approach that was less ad hoc, that might come from things we knew or suspected from elsewhere.”
The idea is that in spacetime foam, every point in spacetime has the huge amount of vacuum energy—the lowest energy state equivalent to “empty space”—predicted by quantum theory, but behaves differently to other points. For any particular way in which a point in spacetime is behaving, the exact opposite is equally as likely to occur at another point in spacetime. This is the feature of spacetime foam which “cancels out” the extra energy and expansions at a tiny scale, resulting in the lower energy that we observe at the scale of the whole universe.
For this to work, one has to assume that at the quantum level, time has no intrinsic “direction.” In other words, there is no “arrow of time.” According to Carlip, in the quantum world, this isn’t such a wild suggestion. “Most physicists would agree that we don’t know at a fundamental level why there’s an arrow of time at all,” he said. “The idea that it’s somehow ’emergent’ on larger scales has been around for a long time.”
Carlip calls spacetime foam a “complex microscopic structure.” It can almost be thought of as an expanding universe formed by tiny expanding and contracting universes at every point in spacetime. Carlip believes it’s possible that over time, the expanding areas of spacetime each replicate the complicated structure, and are themselves filled with tiny universes at every point.

Another paper published in August 2019 explores this scenario more thoroughly. Authors Qingdi Wang and William G. Unruh at the University of British Columbia suggest that every point in spacetime cycles through expansion and contraction, like tiny versions of our universe. Every point in spacetime, they say, is a “microcyclic universe”, endlessly moving from singularity, to a Big Bang, and finally collapse, on repeat.
The tiniest computers in the universe and a theory of everything
Quantum foam is having something of a moment, not just as a solution to the Cosmological Constant Problem, but also to address other enigmas in physics, like black holes, quantum computers, and dark energy.
A forthcoming article by Ng suggests that spacetime foam holds the key to finally unify and explain phenomenon at both a quantum and cosmological scale, moving us towards the elusive Theory of Everything. Such a theory would explain areas of physics which are currently independent, and at times conflicting, under one coherent framework.
Like Carlip, Ng also derives the large value for a positive cosmological constant using a model of spacetime bubbles. But to do so, he treats the “bubbles” in quantum foam as the universe’s tiniest computers, encoding and processing information.
Remember: quantum foam contains bubbles of uncertainty in space and time. To measure how “bubbly” spacetime is, Ng suggests a thought experiment involving clocks clustered in a spherical volume of spacetime which transmit and receive light signals and measure the time it takes for the signals to be received.
“This process of mapping the geometry is a sort of computation, in which distances are gauged by transmitting and processing information,” he wrote in his paper.
Using other known relationships between energy and quantum computation, and the limit on mass inside the sphere to avoid forming a black hole, Ng argued that the uncertainty built into the quantum-scale universe that determines how accurately (or inaccurately) we can measure the geometry of spacetime also limits the maximum amount of information these bubble-computers can store and their computing power.
Extending this result for the entire universe rather than an isolated volume of spacetime, Ng shows that spacetime foam is equivalent to dark energy and dark matter, since ordinary matter would not be capable of storing and computing the maximum amount of information he derives from the measurement task.
“The existence of spacetime foam, with the aid of thermodynamic considerations, appears to imply the co-existence of a dark sector (in addition to ordinary matter),” Ng told Motherboard. “This line of research is not common within the physics community, but it makes (physical) sense to me.”
The key takeaway from Ng’s work is is: not only can spacetime foam be measured and explored conceptually, but it can also explain the acceleration of the universe by connecting quantum physics, general relativity and dark energy. Ng believes a Theory of Everything is within reach.
“Eventually what I’d like to explore and, more importantly, what I would like to encourage others to explore, is to go beyond the consideration of spacetime foam, and to see whether both quantum mechanics and gravitation are emergent phenomena, and whether thermodynamics (whose protagonist is entropy) holds the key to understand the laws of nature,” he said.
https://www.vice.com/en_us/article/j5yngp/the-universe-is-made-of-tiny-bubbles-containing-mini-universes-scientists-say

OUT OF MIND » PERCEPTUAL AWARENESS » POWER TOOLS » SACRED GEOMETRY: The Universe Is Made of Tiny Bubbles Containing Mini-Universes, Scientists Say