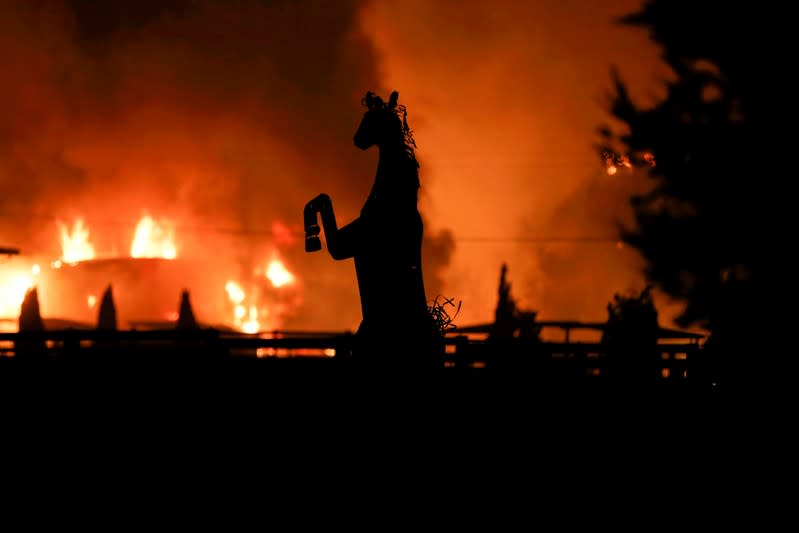 Source: Reuters
Actor and former California Governor Arnold Schwarzenegger among the thousands who had to evacuate overnight
Lisa Richwine and Omar Younis
LOS ANGELES, Oct 28 (Reuters) – A fast-moving wildfire on Monday destroyed at least five multimillion-dollar homes in one of the wealthiest neighborhoods in Los Angeles and forced celebrities to flee in the middle of the night.
Among neighborhoods under evacuation orders was the posh area of Brentwood, a section on the west side of the city that became world famous in 1994 when former football star O.J. Simpson was accused of killing his ex-wife and a waiter there.
Today Brentwood is home to basketball superstar LeBron James, A-list Hollywood actors, wealthy producers and media company executives.
James, who plays for the Los Angeles Lakers, said he and his family had to drive around in the early morning hours looking for a place to stay after fleeing the home he shares with his wife and three children.
“Had to emergency evacuate my house and I’ve been driving around with my family trying to get rooms,” James wrote on Twitter around 4 a.m. He later added that he found a place to take them in. “Crazy night man!,” he said.
James bought a $23 million, eight-bedroom home in Brentwood in late 2017, according to media reports.
On the northern edge of Brentwood, a cluster of several multimillion-dollar homes were reduced to smoldering debris along a street festooned with Halloween decorations.
A fake bloody arm, part of the holiday decorations, had turned into melted plastic at one dwelling, and a giant skull replica remained in the front of another. Heavy smoke and ash filled the air as water-dropping helicopters and airplane tankers buzzed overhead.
DARK FATE
Actor and former California Governor Arnold Schwarzenegger also said he was among the thousands who had to evacuate overnight.
“If you are in an evacuation zone, don’t screw around. Get out,” Schwarzenegger wrote on Twitter.
A red-carpet premiere for Schwarzenegger’s new movie, “Terminator: Dark Fate,” that had been scheduled for Monday night was canceled due to fires in the area.
The “Terminator” premiere had been scheduled to take place in Hollywood, several miles from the fire zone. Food intended for the premiere party was being donated to local American Red Cross shelters that were housing fire evacuees, Paramount Pictures said.
“Agents of SHIELD” actor Clark Gregg and “Sons of Anarchy” creator Kurt Sutter also said on Twitter that they had been forced to leave their homes.
The streets of Brentwood became familiar to TV viewers when Simpson stood trial on charges of stabbing ex-wife Nicole Brown Simpson and waiter Ronald Goldman. Prosecutors alleged Simpson killed the pair at her Brentwood home and then fled to his nearby mansion.
Simpson was acquitted of murder but later found liable for the deaths in a civil case. He told the Associated Press in June he now lives in Las Vegas.
Monday’s fire erupted in the hills above where Simpson had lived and was near the Getty Center, a museum for the art collection of late oil magnate J. Paul Getty that includes works by Rembrandt and Van Gogh, according to the museum’s website.
The Getty fire has forced schools to close in several areas, including the public school district encompassing Santa Monica and Pacific Palisades and the University of California Los Angles (UCLA). (Reporting by Lisa Richwine; Additional reporting by Omar Younis; Editing by Cynthia Osterman)