In November 2018, NASA’s Voyager 2 spacecraft became only the second human-made object to cross the outer edge of the Sun’s heliosphere, the bubble of space filled by the solar wind. In a series of five papers in the journal Nature Astronomy, researchers describe what they observed during and since Voyager 2’s historic exit. Each paper details the findings from one of Voyager 2’s five instruments: a magnetic field sensor, two instruments to detect energetic particles in different energy ranges and two instruments for studying plasma. 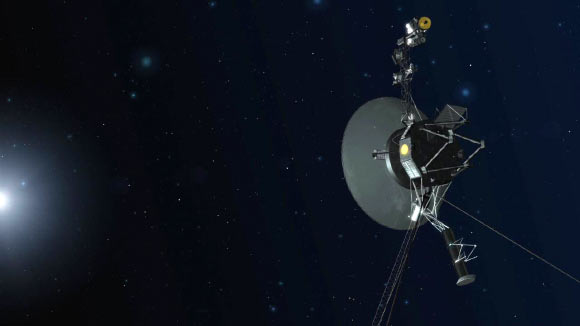 An artist’s concept depicting one of NASA’s twin Voyager spacecraft. Image credit: NASA / JPL-Caltech.
“In a historical sense, the old idea that the solar wind will just be gradually whittled away as you go further into interstellar space is simply not true,” said University of Iowa’s Dr. Don Gurnett.
“We show with Voyager 2 — and previously with Voyager 1 — that there’s a distinct boundary out there. It’s just astonishing how fluids, including plasmas, form boundaries.”
The Sun’s heliosphere is like a ship sailing through interstellar space. Both the heliosphere and interstellar space are filled with plasma. The plasma inside the heliosphere is hot and sparse, while the plasma in interstellar space is colder and denser. The space between stars also contains cosmic rays.
When Voyager 2 exited the heliosphere last year, scientists announced that its two energetic particle detectors noticed dramatic changes: the rate of heliospheric particles detected by the instruments plummeted, while the rate of cosmic rays increased dramatically and remained high. The changes confirmed that the probe had entered a new region of space.
Before Voyager 1 reached the edge of the heliosphere in 2012, researchers didn’t know exactly how far this boundary was from the Sun.
The two probes exited the heliosphere at different locations and also at different times in the constantly repeating, approximately 11-year solar cycle.
Scientists expected that the edge of the heliosphere, called the heliopause, can move as the Sun’s activity changes, sort of like a lung expanding and contracting with breath. This was consistent with the fact that the two probes encountered the heliopause at different distances from the Sun.
The new papers now confirm that Voyager 2 is not yet in undisturbed interstellar space. Like its twin, Voyager 1, the probe appears to be in a perturbed transitional region just beyond the heliosphere.
“The Voyager probes are showing us how our Sun interacts with the stuff that fills most of the space between stars in the Milky Way Galaxy,” said Caltech Professor Ed Stone, project scientist for Voyager.
“Without the new Voyager 2 data, we wouldn’t know if what we were seeing with Voyager 1 was characteristic of the entire heliosphere or specific just to the location and time when it crossed.” 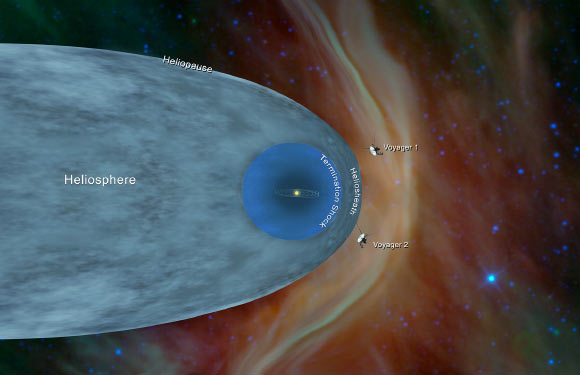 This illustration shows the position of NASA’s Voyager 1 and Voyager 2 probes, outside of the heliosphere, a protective bubble created by the Sun that extends well past the orbit of Pluto. Image credit: NASA / JPL-Caltech.
The two Voyager spacecraft confirmed that the plasma in local interstellar space is significantly denser than the plasma inside the heliosphere, as scientists expected.
Voyager 2 also measured the temperature of the plasma in nearby interstellar space and confirmed it is colder than the plasma inside the heliosphere.
If the heliosphere is like a ship sailing through interstellar space, it appears the hull is somewhat leaky. One of Voyager’s particle instruments showed that a trickle of particles from inside the heliosphere is slipping through the boundary and into interstellar space.
Voyager 1 exited close to the very front of the heliosphere, relative to the bubble’s movement through space. Voyager 2, on the other hand, is located closer to the flank, and this region appears to be more porous than the region where Voyager 1 is located.
An observation by Voyager 2’s magnetic field instrument confirms a surprising result from Voyager 1: the magnetic field in the region just beyond the heliopause is parallel to the magnetic field inside the heliosphere.
With Voyager 1, scientists had only one sample of these magnetic fields and couldn’t say for sure whether the apparent alignment was characteristic of the entire exterior region or just a coincidence.
“Voyager 2’s magnetometer observations confirm the Voyager 1 finding and indicate that the two fields align,” Professor Stone said.
“The two Voyagers will outlast Earth,” said Dr. Bill Kurth, a research scientist at the University of Iowa.
“They’re in their own orbits around the Galaxy for five billion years or longer. And the probability of them running into anything is almost zero.”
“They might look a little worn by then,” Dr. Gurnett added with a smile.
_____
S.M. Krimigis et al. 2019. Energetic charged particle measurements from Voyager 2 at the heliopause and beyond. Nat Astron 3: 997-1006; doi: 10.1038/s41550-019-0927-4
L.F. Burlaga et al. 2019. Magnetic field and particle measurements made by Voyager 2 at and near the heliopause. Nat Astron 3: 1007-1012; doi: 10.1038/s41550-019-0920-y
E.C. Stone et al. 2019. Cosmic ray measurements from Voyager 2 as it crossed into interstellar space. Nat Astron 3: 1013-1018; doi: 10.1038/s41550-019-0928-3
J.D. Richardson et al. 2019. Voyager 2 plasma observations of the heliopause and interstellar medium. Nat Astron 3: 1019-1023; doi: 10.1038/s41550-019-0929-2
D.A. Gurnett & W.S. Kurth. 2019. Plasma densities near and beyond the heliopause from the Voyager 1 and 2 plasma wave instruments. Nat Astron 3: 1024-1028; doi: 10.1038/s41550-019-0918-5