Latest topics
» Angry Yet? Why Not?

OUT OF MIND » THE INSANITY OF REALITY » GOVERNMENTS & THE NEW WORLD ORDER » California Approves $3.2 Billion Bond For High Speed Train To Nowhere

Less than a year after California Gov. Gavin Newsom brought California’s dreams for a LA to San Fran bullet train crashing down, when he said in February that he is ending the state’s hugely expensive and hopelessly quixotic high-speed rail line fiasco (which would have been completed in 2033 at a staggering cost of $77 billion), California is about to unleash another high speed train project, and this one is even more idiotic.
The California Infrastructure and Economic Development Bank (IBank) has authorized a $3.2 billion tax-exempt, fixed-rate revenue bond issuance to help DesertXpress Enterprises, an affiliate of Virgin Trains USA, build a high-speed train from Victorville, California, to Las Vegas. The new XpressWest service, at speeds of up to 180 miles per hour, will take about 90 minutes one way.
There is just one problem: Victorville, located in SoCal’s high desert, is quite literally in the middle of nowhere. 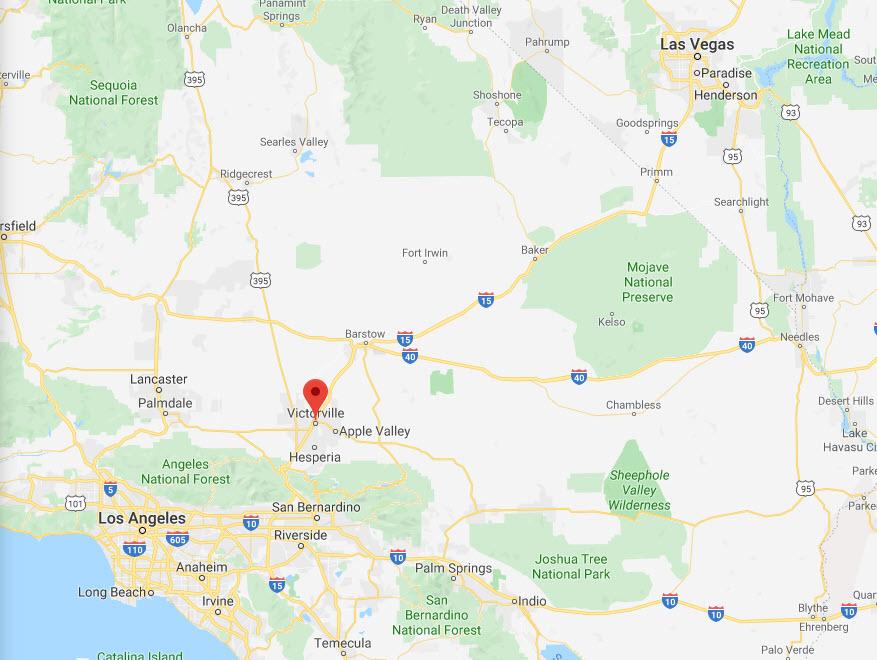 Report this ad
More on that in a second.
DesertXpress will be able to use the money to pay for the 135 miles of the project located within the state of California. This, according to ConstructionDrive, includes the costs of design, development, construction, operation and maintenance of the rail system itself; a passenger station; a maintenance facility; train cars; and electrification infrastructure. DesertXpress will also be able to use the bonds, which are sponsored by the California county of San Bernardino, to establish a debt service reserve fund, as well as pay for interest and other bond-related expenses. While total spending is listed at around $4.8 billion, “hard construction costs” are $3.6 billion.
Construction, which is expected to begin in the second half of 2020 and wrap up in 2023, according to an IBank staff report, will generate more than 15,800 temporary construction jobs.
That’s the good news. The bad news is… what the hell are they thinking?
In theory, it’s not a terrible idea: California has for decades sought to find a fast path between Los Angleles and Las Vegas. In practice, the fact that the train runs to Victorville assures that the project is DOA.
The XpressWest between California and Las Vegas, according to the IBank staff report, will take about half the time of a car trip, but Randal O’Toole, a senior fellow at the Cato Institute, thinks that there simply won’t be enough potential passengers — at least enough to make the new bullet train a success.
“If you’re driving from Los Angeles to Victorville, by the time you get there, you’re pretty much halfway to Vegas,” O’Toole said, “so why would you stop and leave your car somewhere and take a train and then have to walk to wherever your destination is — or take a cab or an Uber or Lyft — when you can just drive your car there?” 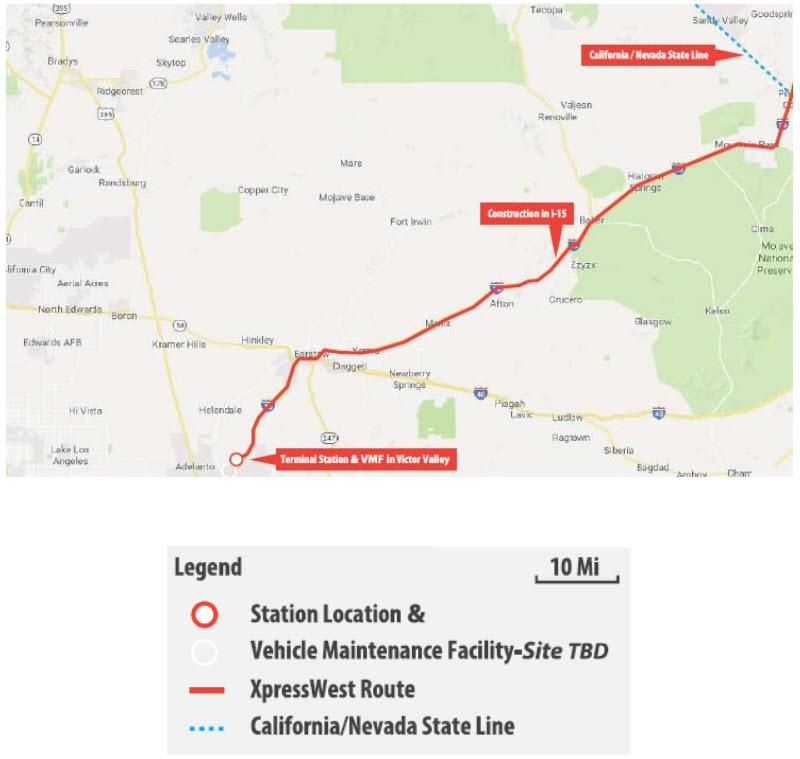 That’s probably a question the creators of the project should have asked first.
Here’s the problem: the distance between Los Angeles and Victorville is about 90 miles and about 190 miles from Victorville to Las Vegas.
“Driving from Los Angeles to Victorville,” O’Toole said, “you’re driving through all the traffic — you’re driving over the mountains … and you get to Victorville and it’s just a straight shot to Las Vegas. It’s more miles, but there’s very little traffic.
“If they were going to go from Los Angeles to Las Vegas, they might have a chance of attracting some customers, but going through the mountain would be extremely expensive,” he said. “They’re building the easy part of the rail line but not the part that they need to build to actually attract customers.”
Virgin Trains USA is a majority owner of Virgin Trains USA Florida, formerly known as Brightline, and currently owns and operates an express rail passenger rail system that runs from Miami to West Palm Beach. The company is building a $4 billion extension to Orlando International Airport. The estimated completion date is sometime in 2022.
And while the company’s projects may be viable in Florida, they will be another epic waste of funds in California.
Meanwhile, when we said that the first high speed train is dead, well that wasn’t quite right: the construction of the original California bullet train is still chugging along, albeit on a reduced scale. While Governor Gavin Newsom shelved the California High-Speed Rail Authority’s plans for a $77 billion rail line between San Francisco and Los Angeles after amid concerns over escalating costs and schedule delays, the governor limited work to the $20 billion Central Valley portion of the project that will take passengers between Bakersfield and Merced.
In other words, another high speed train going from nowhere to nowhere.
So why does California continue to press along with not one but two train projects it knows will be a disaster? The answer is simple: “free” Federal money. The High-Speed Rail authority is trying to beat a Dec. 31, 2022 deadline in order to not lose a $929 million Federal Railroad Administration grant for that particular segment.
In other words, instead of saving almost a billion dollars in taxpayer funds, and applying them to something useful, California is willing to begin a project which everyone knows will be a catastrophic waste of funds, but since the money has to be spent, even if it means digging holes just to fill them up again… well, so be it. After all, this is the government hard at work.

OUT OF MIND » THE INSANITY OF REALITY » GOVERNMENTS & THE NEW WORLD ORDER » California Approves $3.2 Billion Bond For High Speed Train To Nowhere