Is this a UFO, or something else ? Image Credit: Facebook / WBTV News / Phil Lambert
This large circular 'hole' in the clouds over North Carolina left social media users scratching their heads this week.
The phenomenon first gained attention on Monday when TV station WBTV posted a photograph of it on Facebook. The image had been taken by Phil Lambert on Old Mountain Road, Iredell County.

The peculiar nature of the image prompted a number of replies from users who noted that it looked as though a disc-shaped object had descended from the sky and punched a hole through the clouds.

Wisps of cloud wafting down from the center of the circle seemed to corroborate this explanation.

It turned out that others had seen it too, including Kathy Lynn Carlin of Collettsville who along with her husband observed the phenomenon at around 10am on Saturday around 65 miles from Charlotte.

But could this really be evidence of a UFO or is something else going on ?

According to weather experts, the spectacle is most likely what is known as 'hole punch cloud' - an atmospheric phenomenon that happens when 'super-cooled' water droplets turn into ice crystals after coming into contact with a plane passing overhead.

These crystals then fall from the sky and create a hole in the cloud that continues to expand.

The effect is something that has often been mistaken for a UFO.

Fallstreak hole
From Wikipedia, the free encyclopedia
Jump to navigation Jump to search

Satellite image of canals and fallstreak holes over east Texas and Louisiana, January 2007 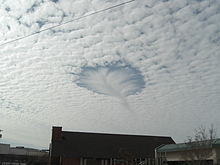 Fallstreak, Italy, Borso del Grappa, March 19th 2019
A fallstreak hole (also known as a cavum,[1] hole punch cloud, punch hole cloud, skypunch, cloud canal or cloud hole) is a large gap, usually circular or elliptical, that can appear in cirrocumulus or altocumulus clouds. Such holes are formed when the water temperature in the clouds is below freezing, but the water, in a supercooled state, has not frozen yet due to the lack of ice nucleation. When ice crystals do form, a domino effect is set off due to the Bergeron process, causing the water droplets around the crystals to evaporate: this leaves a large, often circular, hole in the cloud.[2]
It is thought that the introduction of large numbers of tiny ice crystals into the cloud layer sets off this domino effect of fusion which creates the hole. The ice crystals can be formed by passing aircraft, which often have a large reduction in pressure behind the wing- or propeller-tips. This cools the air very quickly, and can produce a ribbon of ice crystals trailing in the aircraft's wake. These ice crystals find themselves surrounded by droplets, and grow quickly by the Bergeron process, causing the droplets to evaporate and creating a hole with brush-like streaks of ice crystals below it. An early satellite documentation of elongated fallstreak holes over the Florida Panhandle that likely were induced by passing aircraft appeared in Corfidi and Brandli (1986).[3] Fallstreak holes are more routinely seen by the higher resolution satellites of today (e.g., see third illustration accompanying this article).
The articles by Westbrook and Davies (2010)[4] and Heymsfield et al. (2010)[5] explain the processes behind the formation of fallstreak holes in greater detail, and show some observations of their microphysics and dynamics. Such clouds are not unique to any one geographic area and have been photographed from many places.
Because of their rarity and unusual appearance, fallstreak holes have been mistaken for or attributed to unidentified flying objects.[6] 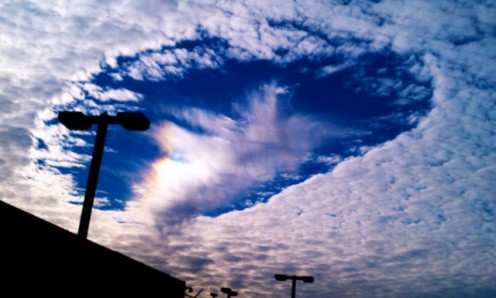 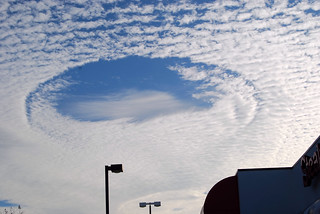