“We’re only trying to defend ourselves.”

By Elias Marat, The Mind Unleashed
(TMU) — Hong Kong’s protesters are getting medieval on authorities, combining a mix of modern militant protest tactics such as Molotov cocktails with flaming bows and arrows, javelins, and even catapults.
As protests and clashes grow increasingly violent in the autonomous Chinese territory, Beijing has continued to issue stern warning of an impending clampdown by central authorities.
On Thursday, Chinese leader Xi Jinping said that the continued unrest in Hong Kong must come to an end, describing protesters’ actions as persistent “radical and violent crimes that have … seriously trampled over [the] rule of law and social order,” reports South China Morning Post.

Hours later, a second person died during clashes between protesters demanding greater autonomy from the mainland Communist Party of China (CPC) government and pro-Beijing protesters. The 70-year-old victim, a cleaner working in the area, died after being struck by a brick, according to hospital officials.
The death came under a week after another student protester died after falling from a building. And on Monday, a 57-year-old man shouting pro-Beijing slogans at protesters was doused in fuel before being set on fire as he told protesters that they “are not Chinese.”

However, the threats of repression and spiraling violence hasn’t dissuaded protesters, who continue to erect makeshift Stonehenge-like walls across roads while stockpiling makeshift weaponry as they prepare to confront security forces loyal to Beijing-backed Hong Kong chief executive Carrie Lam, reports AFP.
Report this ad
Universities have become the de facto headquarters and barracks for the militant student protesters, who have amassed an impressive arsenal filled with sports equipment from university storerooms including archery gear, javelins, and even tennis racquets used to swat away tear-gas canisters.
The ultra-modern East Asian metropolis is even seeing a revival of weapons and defense methods more befitting medieval siege warfare.


This has included gigantic wooden catapults made from scratch and even caltrops – spiked weapons laid out on the ground to prevent the advance of infantry and cavalry – made from PVC piping and nails, which the students have used to deny access to charging crowd-control police.
On Wednesday, protesters battling police introduced the cannon as they tried to seal off the Cross Harbor tunnel leading from the Kowloon peninsula, which connects to mainland China, and the financial center of Hong Kong Island.
A 23-year-old protester who identified themself as Ah Fai told AFP:
“If they come later we’re going to load it with bricks, Molotov cocktails and flammable arrows.”
In footage captured by AFP, the catapult is seen being tested as crowds of black-clad and masked protesters cheer it on.

Public security forces have pointed to the use of such DIY weapons, the destruction of city property, and the transformation of several university campuses into what they describe as a “weapons factory” as intolerable, calling on Hong Kong citizens to reject protesters’ tactics.
Chinese state television network CGTN quoted Kong Wing-cheung, senior superintendent of the Hong Kong Police Public Relations Branch, as saying:
“The police actively took action and went to the universities to do the dispersal. Some people have questioned that the police have no right to enter the school for law enforcement. I solemnly point out that we will not allow any place in Hong Kong to become a place for criminals to hide.”
But a 23-year-old student protester identifying himself as Josh, who stood watching protesters practice firing arrows as he spoke to Reuters, said that such tactics are needed for self-defense, especially given the brutal police response to non-violent approaches.
Josh said:
“It has never been a fair war zone.
“We have nothing, only masks and the police have guns. We’re only trying to defend ourselves.”
By Elias Marat | Creative Commons | TheMindUnleashed.com


Thanks to Wes at: https://openheartedrebellion.com

In one video circulating on Twitter, students at CUHK have established check points around the campus’s perimeter to stop any undercover cops from entering 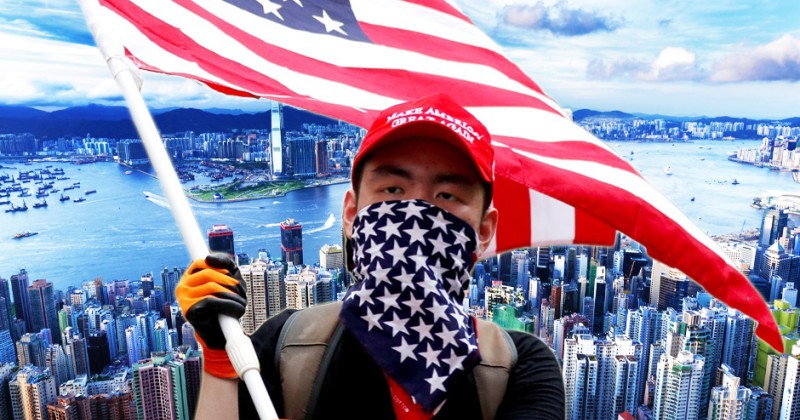 Source:  Zero Hedge
The situation in Hong Kong went from bad to worse on Thursday, as the unprecedented weekday protests – a violation of the tacit agreement between the pro-democracy movement and the business community not to disrupt weekday commerce -continued for a fourth day on Thursday.
After a squad of HK police officers earlier this week raided the campus of the Chinese University of Hong Kong, but purportedly found nothing, protesters accused them of unjustly harassing students, many of whom are simply trying to get through the semester. Just a day later, student protesters (the backbone of the increasingly radical movement) are openly making petrol bombs and have cordoned off their campuses, transforming them into literal staging grounds for the protest movement.
In one video circulating on Twitter, students at CUHK have established check points around the campus’s perimeter to stop any undercover cops from entering.
Read More