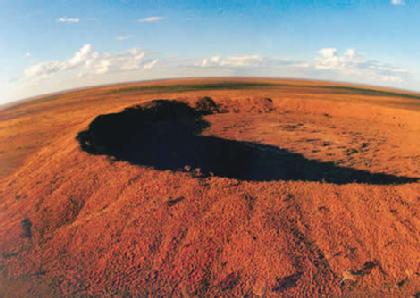 In the state of Western Australia sits the famous Wolfe Creek crater, the aftermath of a 14,000-tonne meteorite crashing into Earth thousands of years ago. A new study now claims the impact happened far more recently than we suspected, prompting a rethink on how often giant space rocks actually strike our planet.
A team of researchers from universities in Australia and the US took a close look at several features of the crater's underlying rock to get a precise measurement on the age of Wolfe Creek's most famous landmark.
Previous estimates have stated the crater could be 300,000 years old, but the new result places it much closer to our time, perhaps as little as 120,000 years ago. And knowing this is not just a geological curiosity, either.
As far as neat-looking craters go, they don't tend to be much bigger. With little rain to wear away the walls of the impact site, Wolfe Creek crater has been remarkably well preserved throughout the ages. But the site also stands out for the fact it is the second largest crater on Earth to still have fragments of the offending space rock.
There's no doubt the shrapnel of far bigger blasts exist out there somewhere, but with ocean and ice covering so much of our planet's surface, and wind and rain eating away at the geology, evidence is hard to come by.
In fact, the vast majority of craters found today on Earth are less than 100,000 years old. Anything older has been largely lost to the elements, either worn down or covered up.
That makes Australia's outback – and therefore Wolfe Creek – somewhat special.
"Elsewhere, craters are destroyed by geomorphic activity like river migration or slope processes in the mountains," says University of Wollongong geochemist Tim Barrows.
"Since Australia has an excellent preservation record with dated craters within the arid zone, we can extrapolate a rate for the whole Earth."
The monster that made a hole in Western Australia's landscape was most likely around 15 metres (50 feet) across and moving at around 17 kilometres (about 10 miles) a second. The collision shattered the underlying terrain, liquefying the meteorite itself as well as the crust.
What remained was a frozen ripple with a central depression with an average diameter of 892 metres (2,930 feet) and a depth of 178 metres (584 feet). Throw in a thick layer of sand, though, and that distance to the floor is now closer to 50 metres (164 feet).
There have been a variety of attempts to determine the age of the site. Early attempts set an upper boundary of around 2 million years, but since then researchers had settled at around 300,000 years.
This latest stab at a date is based on a middle ground, using two different techniques.
Like previous studies, the team looked at the steady decay of two isotopes – beryllium-10 and aluminium-26. A second method involved optically stimulated luminescence, which determines passing time by measuring changes in the energy trapped in the crystal lattice of sand molten by the blast.
They team conducted a survey of the landscape using photogrammetry, nailing down the dimensions with unprecedented precision. Combining the data, the researchers put a maximum age on the crater of about 137,000 years, though it's more likely that the impact occurred about 120,000 years ago.
The team applied the same techniques to another impressive scar – the 1,200 metre (3,900 foot) wide Meteor Crater in Arizona – pushing its time of formation back by another 10,000 years.
Without many sizeable craters to form a decent-sized sample, even small changes to a single crater's timeline can help researchers in pinning down the precise rate of sizeable meteorite strikes on Earth.
A revision of Wolfe Creek's age suggests Australia's outback has seven craters larger than 25 metres (about 82 feet) that have formed since then, giving a rate of one significant strike every 17,000 years.
Extrapolating that for the rest of the planet isn't straightforward, but it gives researchers somewhere to start.
"Taking into account that arid Australia is only about one per cent of the surface, the rate increases to one every 180 years or so," says Barrows.
Previous studies have estimated Wolfe Creek-sized impacts should occur every 13,000 years, with smaller craters of about 150 metres across being left about every 500 years.
Given the cosmos doesn't exactly go by any timetable, the figures aren't to be taken literally, but instead help us to gauge just how seriously we should take calls to watch the skies for potential hazards.
We can expect another Wolfe Creek crater to appear somewhere on Earth in the future. Next time, it might not be as remote as the Australian outback.
This research was published in Meteoritics & Planetary Science.