During the past few years we extensively covered a bizarre surge in banker suicides, pointing out the various conspiracy theories linking various high-level bank executives and inside scandals at the very highest levels across financial institutions, and no bank had more high profile suicides than Deutsche Bank.
It all started on January 26, 2014 when a 58-year-old former senior executive at German investment bank behemoth Deutsche Bank, William Broeksmit, was found dead after hanging himself at his London home. He had been involved in the bank's risk function and advised the firm's senior leadership; according to a suicide note found after his death, he had been "anxious about various authorities investigating areas of the bank where he worked" (we profiled the suicide extensively in "an Inside Look At Two "Unrelated" Banker Suicides Reveals A Fascinating Rabbit Hole").
Broeksmit's death appeared to set off an unprecedented series of banker suicides throughout the year which included former Fed officials and numerous JPMorgan traders. A few months later, in October, another Deutsche Bank veteran committed suicide when the bank's associate general counsel and former SEC enforcement attorney, 41 year old Calogero "Charlie" Gambino, who was found on the morning of Oct. 20, having also hung himself by the neck from a stairway banister.
Fast forward to this week when Thomas Bowers, a former Deutsche Bank executive and head of the bank's US private wealth-management division (i.e., the group catering to ultra wealthy clients), killed himself by hanging in his Malibu residence last Tuesday, November 19th, according to the coroner’s initial report. Bowers was 55.
[url=https://www.blacklistednews.com/s3/files/inline-images/bowers coroner] 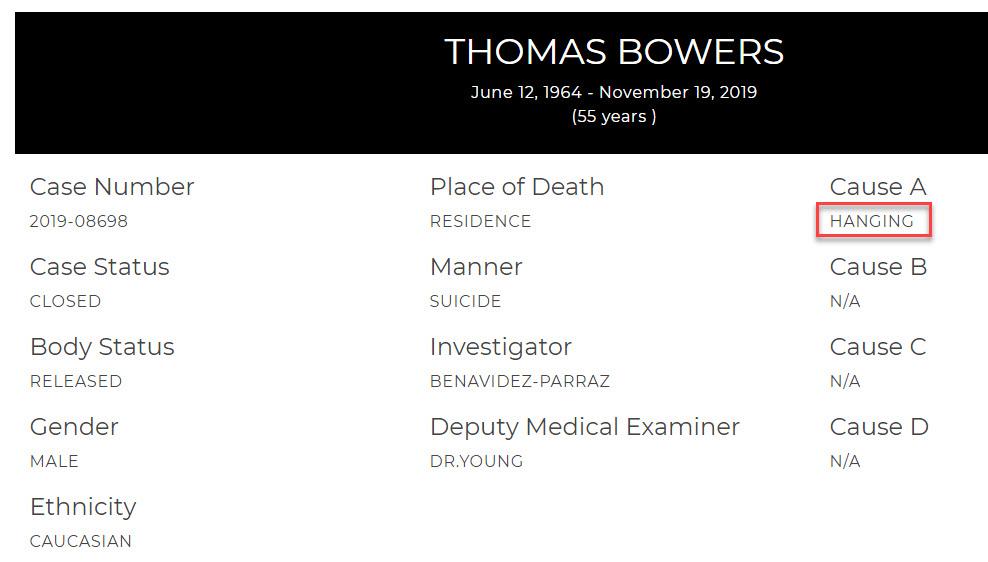 [/url]
News of Bowers death was first reported by New York Times reporter, David Enrich, who is currently finalizing his book "Dark Towers" which includes extensive first-person accounts from Val Broeskmit, the son of the late Deutsche Bank risk executive, William Broeksmit who as noted above, hung himself in London in January 2019.
The University of Boston graduate was most recently Chief Operating Officer of Starwood Capital Group according to his bio: "Bowers is responsible for driving Starwood Capital’s priority strategic initiatives and enhancing the operational effectiveness of the Firm’s public and private operating companies and entities."
More notably, prior to joining Starwood Capital in 2015, Bowers was Co-Head of Asset and Wealth Management-Americas at Deutsche Bank, where has started in 2005 and was responsible for managing the U.S. and Latin American wealth management businesses, and had joint responsibility for the integration of Deutsche Bank’s wealth and institutional asset management businesses in the Americas. Bowers was also a board member of Deutsche Bank Securities: if anybody knew where the bodies are buried, he would be one of them.
Just as notable is that both Bowers and Broeksmit appear to have held key functions for Deutsche Bank's US wealth-management division, with Broeksmit operating through the murkier Deutsche Bank Trust Company Americas, or DBTCA.
But what is most remarkable is that according to a March 2019 report by the same David Enrich, Bowers was boss to Trump’s personal banker Rosemary Vrablic, who according to the NYT report helped steer more than $300 million in loans to Donald J. Trump in the years before he was elected president.

Rosemary T. Vrablic, allegedly helped steer more than $300 million in loans to Donald J. Trump in the years before he was elected president
"Rosemary is widely recognized as one of the top private bankers to the U.S. ultra high-net-worth community," Bowers said in a September 2006 news release announcing Vrablic's hire from BofA's Private Bank. To lock the hire, Deutsche Bank reportedly paid Vrablic a $3 million guarantee, which back in 2006 was a lot of money for a private welath banker.
According to the NYT, Vrablic was "not a traditional private banker, and her bosses at Deutsche Bank encouraged her to be aggressive." Throughout her career, Vrablic was instrumental in providing Trump and his real estate organization with hundreds of millions in loans. As the NYT further adds, Trump "used loans from Deutsche Bank to finance skyscrapers and other high-end properties, and repeatedly cited his relationship with the bank to deflect political attacks on his business acumen. Deutsche Bank used Mr. Trump’s projects to build its investment-banking business, reaped fees from the assets he put in its custody and leveraged his celebrity to lure clients."
Trump's relationship with Vrablic was so close that she was "bundled in a hooded white parka in a fenced-off V.I.P. section" during Trump's 2017 inaugural address.
Here is where the rabbit hole gets deeper: according to ForensicNews journalist Scott Stedman, "one source who has direct knowledge of the FBI’s investigation into Deutsche Bank said that federal investigators haved asked about Bowers and what documents he might have."
Stedman also said that "another source who has knowledge of Deutsche Bank’s internal structure said that Bowers would have been the gatekeeper for financial documents for the bank’s wealthiest customers."
* * *
So is Bowers, Ms. Vrablic's former boss, linked to the loans made to Trump by Deutsche Bank, and was he indeed targeted by the FBI for his knowledge of DB's secret dealings? Most importantly, was his suicide in any way a result of these loose ends?
While the answer is unknown as of this moment, we paraphrase Enrich when he wrote that after "Trump won the 2016 election, the German bank shifted into damage-control mode, bracing for an onslaught of public scrutiny, according to several people involved in the internal response." It is possible that that scrutiny may have now cost the life of one more Deutsche Banker.