Thanks to Natasha Nyxx for this dank meme :) President Bolsonaro made the accusations during a Facebook live video on Thursday. He repeated the accusation on Friday after reporters asked him to elaborate on the claims.
Breitbart.com reports: Bolsonaro regularly conducts weekly Facebook live chats with the nation. On Thursday’s edition – at one point interrupted by First Lady Michelle Bolsonaro, who gave him a bouquet of flowers for their wedding anniversary – Bolsonaro claimed that Western NGOs operating in the Amazon are starting fires, filming them, then using them in propaganda against the conservative president.
“An NGO pays 70,000 reais ($16,588.08) for a fabricated photo of fires. And what is easier? You play ‘fire’ in the bush, take a photo, film it, send it to an NGO, the NGO exposes it, gets in touch with Leonardo DiCaprio, and Leonardo DiCaprio donates $500,000 to this NGO,” Bolsonaro said in his Facebook Live. “Leonardo DiCaprio, you are collaborating with the burning of the Amazon.”
On Friday morning, Bolsonaro doubled down on the accusation.

“Now Leonardo DiCaprio is a nice guy, right? Giving money to set fire to the Amazon,” he told reporters, later accusing them of mocking him for claiming that environmentalist groups were burning parts of the rainforest to accuse him of hurting the environment and ask for donations.
The Brazilian newspaper Estadao noted that police arrested four people in Pará state on Wednesday linked to environmentalist groups.
Those arrested reportedly belonged to local NGOs that claim to be fighting the fires. National law enforcement members have accused them of taking money from the World Wildlife Fund (WWF) to fight the fires, then burning more land to claim they need more funds to extinguish fires.
Bolsonaro’s son, the lawmaker Eduardo Bolsonaro, first accused DiCaprio in a Twitter post Thursday.
“Leonardo DiCaprio gave $300,000 to an NGO that set fire to the Amazon, the NGO the WWF paid 70,000 reais for the photos of the forest in flames,” Bolsonaro wrote, showing the photos he alleged were fabricated of the fires. “[French President Emmanuel] Macron and Madonna were smarter, just took some pictures taken decades ago of some burning forest on the internet and posted them.” 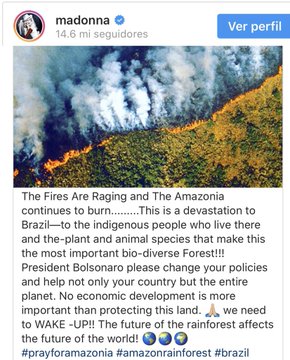 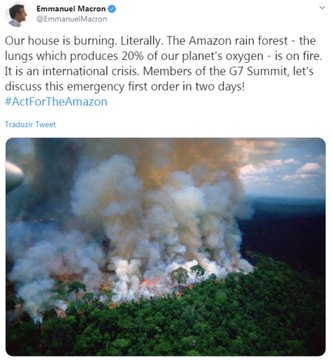 The photos shared by Macron and Madonna, among other celebrities, were exposed as having been at least 16 years old, as their photographer died in 2003. The celebrities shared the photos amid an international panic about the Amazon that began in August, as the planting season began in the Southern Hemisphere. Farmers often burn down parts of forest to clear weeds and begin their annual planting. This year, the Brazilian government found that the fires were contained and about average in size, but environmentalist groups and celebrities accused Bolsonaro of emboldening farmers to start fires and destroy the virgin rainforest, without evidence.
Unlike Brazil under the conservative Bolsonaro, neighboring Bolivia did see a spike in unregulated fires as a result of then-President Evo Morales, a socialist, passing more permissive laws allowing the farmers that kept him in office to destroy more of the forest. While Bolsonaro’s government was simultaneously limiting the use of legal, controlled fires, most of the ire fell to Bolsonaro, particularly from Macron.
Macron’s government accused Bolsonaro of lying about his government taking the Amazon fires seriously when the two world leaders met at the G-7 Summit in Osaka this year. In response, Bolsonaro accused Macron of “colonialism” in meddling in Brazilian affairs while not working to rehabilitate the devastated, post-industrial French countryside. Bolsonaro also rejected a $20 million care package Macron wanted to send to the country, saying that Brazil could afford its stringent environmental protections.
Bolsonaro’s Chief of Staff Onyx Lorenzoni also insulted Macron, noting his government failed to prevent a fire at the iconic Notre Dame cathedral in Paris.
“Macron couldn’t even prevent a foreseeable fire in a church that is a World Heritage Site and he wants to teach our country, what [exactly]?” Lorenzoni asked. “He has a lot to take care of at home and in the French colonies. Brazil is a democratic, free country, and never had colonialist and imperialist practices like the Frenchman Macron perhaps would like.”
DiCaprio is a vocal environmental advocate, despite a luxury lifestyle that leaves a prodigious carbon footprint. In early November, DiCaprio met with teen climate alarmist Greta Thunberg, stating publicly the two had made a “commitment to support each other.” DiCaprio heralded Thunberg the “leader of our time.”

» RH- Blood Type ~ Why Johnny Depp, Paul McCartney And Leonardo DiCaprio Can Not Be Cloned
» AMAZON FIRE UPDATES - Suspicion Grows As Experts Suggest That Amazon Fires Were Intentional plus MORE
» AMAZON FIRE UPDATES - Global worry over Amazon fires escalates; Bolsonaro defiant plus MORE
» To Stop Amazon Deforestation, Brazilian Groups Take Bolsonaro to Court
» Brazilian President Says He Will Not Take a Coronavirus Vaccine (Neither Should You)