Prasad had what can only be described as a transcendental experience. Image Credit: kalhh / Pixabay
Quantum computing expert Deep Prasad has come forward with a rather extraordinary story.
Prasad, who has been involved in a new endeavour to hunt down more evidence of the 'Tic-Tac' UFO encountered by the USS Nimitz carrier group in 2004, recently wrote an extensive series of Tweets describing his own remarkable encounter with extraterrestrial entities.

The incident occurred on February 1st of this year.

"It happened in broad daylight at 9:40 in the morning in my home," he wrote. "More specific details will be for another time when I have a better safety net and can expand more. But to put it simply: I was paralyzed against my will, could not move, and saw 3 entities that had no-chill."

"Could I be crazy? Sure. Do I think I am? Obviously not. Could this have been a hallucination? I can't prove it wasn't or I wouldn't be so worried about sharing this."

He went on to describe how the entities began to telepathically communicate large amounts of indecipherable text and symbols (that looked like Hieroglyphics) into his mind.

"These things are really real ?" he recalled thinking. "Is this really happening right now? Are my family and friends ready for this if it ever happens to them ? Are they going to kill me ?"

He found it particularly frustrating that he was unable to understand what the entities were trying to tell him, however he was able to make out the word 'DNA'.

Then, without warning, one of the entities jumped on top of him.

"I felt this weird light hitting the top of my head," he wrote. "And suddenly I got hit with the most blissful, euphoric feeling I have ever felt. I will try my best to describe it: It felt like the Universe was sentient and aware of my existence. The feeling was of warmth and nostalgia(?), it was like a reminder that space is teeming with life and that we're all related to each other by virtue of existing."

A few minutes later, he lost consciousness and awoke to find that the entities had gone.

"I don't know what happened, nor can I prove that this isn't me having gone crazy (I will pass any psychological test no problem but there will always be doubt, which is fair)," he wrote.

"But I'm forever grateful for the experience. I'm thankful for everyone I've met since then on here. There are countless people I admire and like on here. I believe we will figure this mystery out and that Humanity has an incredible future ahead of it."

Some sketches of what he saw during the experience can be viewed below.


A lot of people have asked what the beings I saw looked like. The glyphs are just impressions, I can't remember any specific one with 100% certainty. Hope this helps..and I felt no weight from them, but their touch felt like hard plastic. 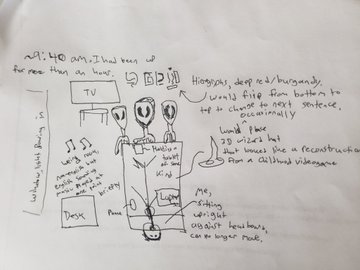 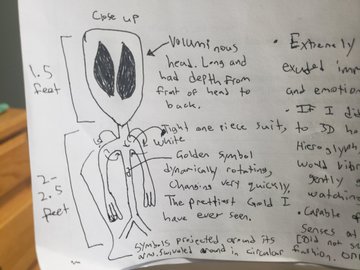 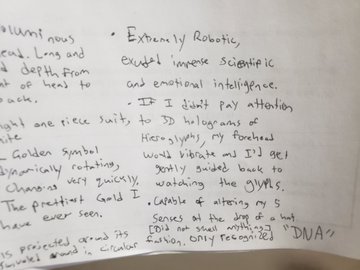