This decorated shield is nothing if not impressive. Image Credit: MAP Archaeological Practice Ltd.
Archaeologists in England are hailing the discovery as one of the most significant finds of the millennium.
Dating back 2,200 years, the grave was discovered in the middle of a housing development near the town of Pocklington.

Chief among the artefacts unearthed at the site was an intricately detailed shield measuring approximately 75cm in diameter and featuring a distinctive sphere in the center.

A chariot, as well as the remains of two ponies buried in a leaping pose, were also found in the grave alongside the remains of a man in his 40s who was seemingly an individual of significant standing.

"We don't know how the man died," said Ware. "There are some blunt force traumas but they wouldn't have killed him. I don't think he died in battle; it is highly likely he died in old age."

"What his role was I can't tell you."

The find has been described as one of the most important discoveries of its kind in British history.

"The magnitude and preservation of the Pocklington chariot burial has no British parallel, providing a greater insight into the Iron Age epoch," said Ware.


Iron Age shield found in Pocklington is "one of most important ancient finds this millennium". https://buff.ly/2OR8A4W 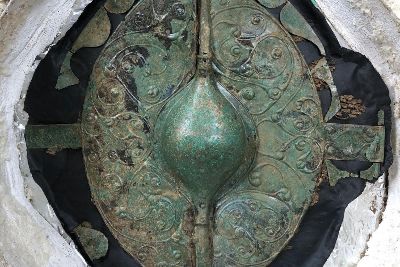 » 'Major find' as long lost Egyptian sun temple unearthed
» Grave Of A GIANT Medieval Warrior Unearthed In Germany
» “The True Nature Of The Spirit Warrior… 22 Ways To Tell If You Are A Spirit Warrior”
»  What tree did you fall from? Find your tree from your birthday to find out - See more at: http://www.trulymind.com/what-tree-did-you-fall-from-find-your-tree-from-your-birthday-to-find-out/#sthash.UyDe1B6A.dpuf
» "Find Me One Doctor That Is Against Vaccines" — Sure, I’ll Find You Hundreds