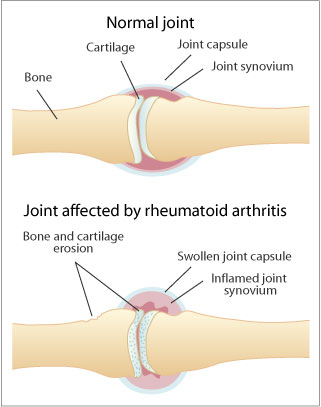 Preventing the onset of rheumatoid arthritis (RA) could likely involve targeting a key mechanism in its development. In their study, which appeared in the journal Nature Cell Biology, an international team of researchers discovered a cellular mechanism for the onset of the disease and presented a protein called A20 can impact inflammation.
Rheumatoid arthritis is a chronic autoimmune disease marked by inflammation in the joint lining. These inflamed areas can result in stiffness and pain for those affected. People at risk of developing RA include the elderly, women and those predisposed to the condition. According to the Arthritis Foundation, over 54 million American adults suffer from arthritis. In addition, over one percent of the world’s population are likely sufferers of RA.
Despite its prevalence, the causes of RA remains unclear, making it even more challenging for healthcare providers to offer suitable preventive approaches to their patients.
In the current study, research teams led by the University of Cologne and Ghent University used a murine model for RA in the hopes of discovering drivers for preventing the disease. They discovered how specialized immune cells cause an inflammatory response by promoting necroptosis, a specific type of cell death. By blocking this cell death, the team was able to prevent the development of RA.
Necroptosis a key factor in RA onset
The current study builds on an earlier report by the team, which demonstrated the ability of the A20 protein in preventing joint inflammation. It also showed the association between impaired A20 activity and the development of inflammatory diseases in humans and mice.
Researchers used a breed of mice that have mutated A20 expression. They found that the mice with the mutant protein spontaneously exhibited signs of arthritis. According to the researchers, this occurred because the mutated proteins were unable to stop the death of a kind of immune cell called a macrophage. A type of white blood cell, macrophages look for cellular debris and foreign molecules that enter the body. The immune cells engulf the harmful material and destroy their targets.
In patients with arthritis, macrophages die via necroptosis. This process of cellular death increases the level of inflammation in the region. For co-author Marietta Armaka, this “revealed how the particular type of macrophage demise shapes the activation of synovial fibroblasts, a key cell type that orchestrates the destruction of cartilage and bone tissue in RA.”
Synovial fibroblasts are cells that regulate the breakdown of bone and cartilage. They contribute to the development of rheumatoid arthritis.
Ways to prevent the onset of rheumatoid arthritis
Some people have genes that make them more likely to experience necroptosis. Armaka and her colleagues believed it was possible to protect these people from rheumatoid arthritis by stopping the death of their macrophage cells.
“[W]e could […] identify why these macrophages are dying and could demonstrate the importance of a specific part in the protein A20 for the prevention of cell death and RA development,” remarked UGent-VIB Center for Inflammation researcher Geert van Loo.
The co-authors stressed the significance of their study on necroptosis. Their data might help create new therapies for rheumatoid arthritis in patients with gene expressions that spurred macrophage death.
“From a therapeutic perspective, this is a very important finding, since it suggests that drugs inhibiting cell death could be effective in the treatment of RA, at least in a subset of patients where macrophage death could provide the underlying trigger,” explained UoC researcher Manolis Pasparakis.
Several pharmaceutical companies are currently working on products that will inhibit necroptosis.
For people who don’t want pharmaceutical drugs, a 2017 study indicated that boosting vitamin D levels may help prevent or treat rheumatoid arthritis. Or look for an Ayurvedic practitioner who may prescribe Bhallatakadi Churna with guda and Bhallatak guggulu.

SIDE NOTE: I reversed RA completely by using CBD/THC oil 7 years ago. I occasionally have to do maintenance doses but am mostly pain free and all swollen joints still gone..