A team of researchers at the Commonwealth Scientific and Industrial Research Organisation (CSIRO), Australia, has developed a simple new method for estimating the lifespans of different vertebrate species. Using their method and human genome sequences, the scientists estimated that our species has a ‘natural’ lifespan of 38 years; they also found that our extinct cousins, Neanderthals and Denisovans, probably lived around 37.8 years, and that woolly mammoths (Mammuthus primigenius) had a maximum lifespan of 60 years. 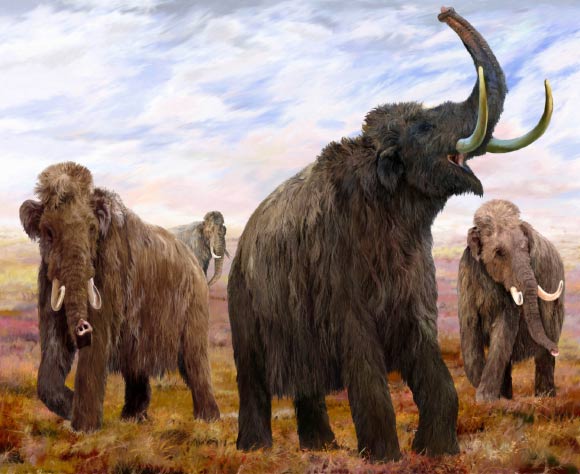 Woolly mammoths (Mammuthus primigenius). Image credit: Velizar Simeonovski / Field Museum.
“Understanding lifespan is critically important for conservation, biosecurity and wildlife management,” said Dr. Benjamin Mayne, a postdoctoral researcher with the Environomics Future Science Platform in the CSIRO’s Indian Oceans Marine Research Centre.
“Our method for estimating maximum natural lifespan is based on DNA. If a species’ genome sequence is known, we can estimate its lifespan.”
“There are many genes linked to lifespan, but differences in the DNA sequences of those genes doesn’t seem to explain differences in lifespan between different species,” he explained.
“Instead, we think that the density of a special type of DNA change, called DNA methylation, determines maximum natural lifespan in vertebrates. DNA methylation does not change a gene’s sequence but helps control whether and when it is switched on.”
“Using the known lifespans of 252 different vertebrate species, we were able to accurately predict lifespan from the density of DNA methylation occurring within 42 different genes.”
To calibrate their method, Dr. Mayne and colleagues used genomes of animals with known lifespans from public databases such as NCBI Genomes and the Animal Ageing and Longevity Database.
“Using our method, we found the maximum lifespan of the bowhead whale (Balaena mysticetus) is 268 years, 57 years longer than people thought,” Dr. Mayne said. 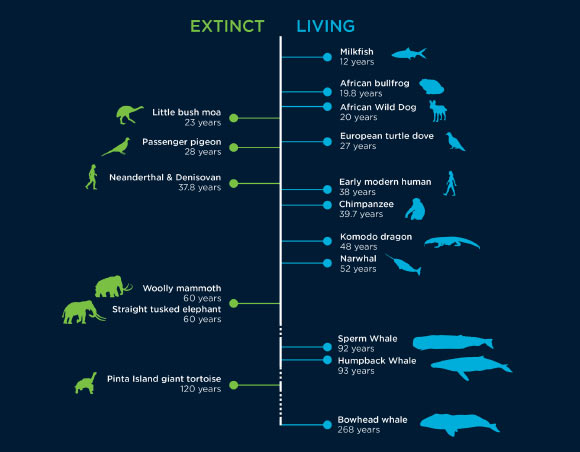 DNA-based lifespan clock can reveal the lifespans of extinct and living species. Image credit: CSIRO.
The study authors estimated that Denisovans and Neanderthals both had a lifespan of 37.8 years, similar to their early human modern-day counterparts.
They also found that extinct woolly mammoths and straight-tusked elephants (Palaeoloxodon antiquus) lived for 60 years, recently-extinct Pinta Island tortoises (Chelonoidis abingdonii) and passenger pigeons (Ectopistes migratorius) for 120 years and 28 years, respectively.
“To estimate lifespan for the extinct woolly mammoth, we worked with a genome assembled from the genome of modern African elephants (Loxodonta sp.), which live for 65 years,” they explained.
“The genome of the Pinta Island tortoise is known from the last surviving member of the species, Lonesome George.”
The findings were published in the journal Scientific Reports.
_____
B. Mayne et al. 2019. A genomic predictor of lifespan in vertebrates. Sci Rep 9, 17866; doi: 10.1038/s41598-019-54447-w