Ancient inhabitants of Easter Island (also known as Rapa Nui) likely believed their megalithic statues called moai stimulated agricultural food production, according to an analysis of two moai with petroglyph carvings that stand within the inner region of the famous quarry at Rano Raraku. 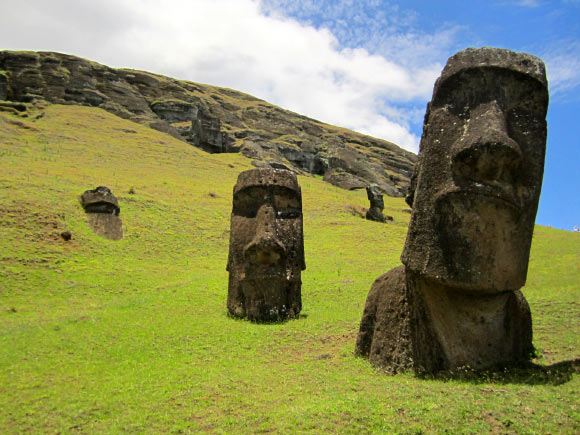 Easter Island is located some 3,512 km from Chile’s west coast and its nearest inhabited neighbor, Pitcairn Island, located some 2,075 km to the west. For reasons still unknown early Rapa Nui people began carving giant statues out of volcanic rock. Image credit: Marlene Hanssen.
“Our analysis showed that in addition to serving as a quarry and a place for carving statues, Rano Raraku also was the site of a productive agricultural area,” said Dr. Jo Anne Van Tilburg, an archaeologist with the Cotsen Institute of Archaeology at the University of California, Los Angeles and director of the Easter Island Statue Project.
“Our excavation broadens our perspective of the moai and encourages us to realize that nothing, no matter how obvious, is ever exactly as it seems. I think our new analysis humanizes the production process of the moai.”
Rano Raraku’s soils are the richest on the island, according to the study. 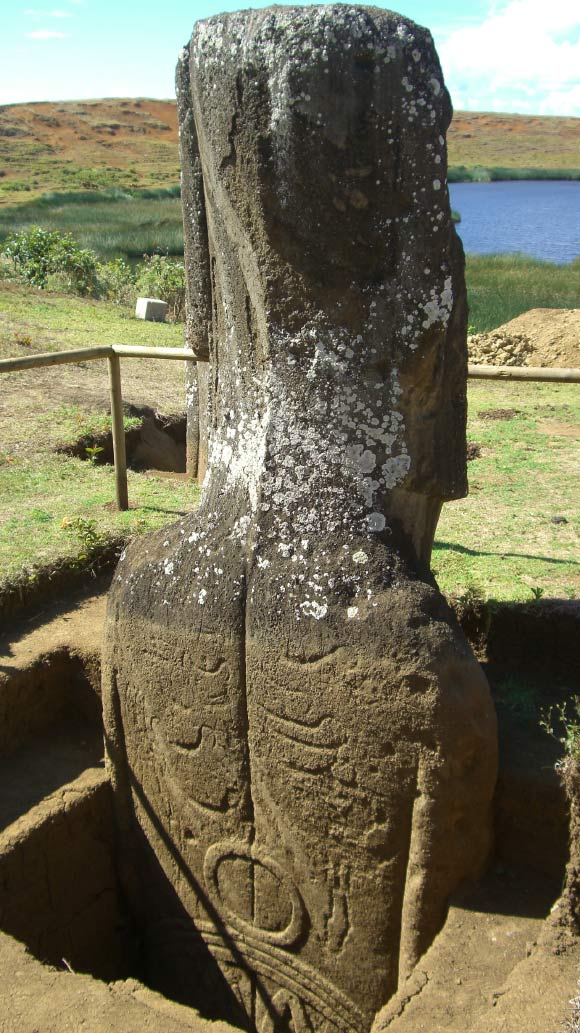 Petroglyphs are seen on the back of Moai 157, which was re-exposed during the excavation at Rano Raraku quarry, Rapa Nui. Image credit: Easter Island Statue Project.
“Coupled with a fresh-water source in the quarry, it appears the practice of quarrying itself helped boost soil fertility and food production in the immediate surroundings,” said Dr. Sarah Sherwood, a geoarchaeologist and soils specialist at the University of the South in Sewanee and a member of the Easter Island Statue Project.
“The soils in the quarry are rich in clay created by the weathering of lapilli tuff (the local bedrock) as the workers quarried into deeper rock and sculpted the moai.”
“It also looks like the ancient indigenous people of Rapanui were very intuitive about what to grow — planting multiple crops in the same area, which can help maintain soil fertility,” she added.
The megalithic statues the team examined, dubbed Moai 156 and 157, are two of only a few moai known to be embellished with multiple petroglyph motifs.
They were discovered upright in place, one on a pedestal and the other in a deep hole, indicating they were meant to remain there. 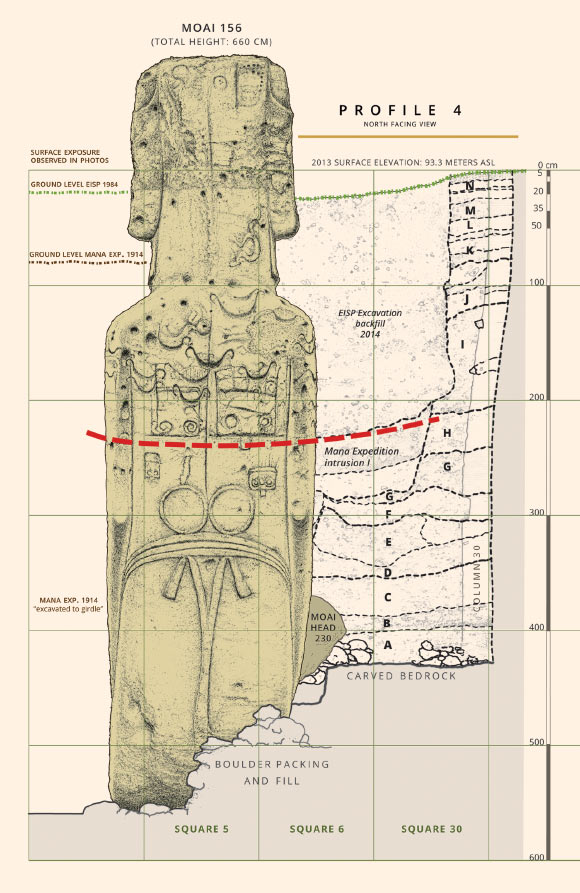 This diagram shows the excavation history of Moai 156, Rano Raraku quarry, Rapa Nui. The red dashed line is the estimated surface when petroglyphs were applied to the statue’s back. This line also represents the point at which stone quarrying in the area probably ended. The green line represents ground level at the start of excavation. Image credit: Cristián Arévalo Pakarati / Easter Island Statue Project.
“This study radically alters the idea that all standing statues in Rano Raraku were simply awaiting transport out of the quarry,” Dr. Van Tilburg said.
“That is, these and probably other upright moai in Rano Raraku were retained in place to ensure the sacred nature of the quarry itself.”
“The moai were central to the idea of fertility, and in Rapanui belief their presence here stimulated agricultural food production.”
The study was published in the November 2019 edition of the Journal of Archaeological Science.
_____
Sarah C. Sherwood et al. 2019. New excavations in Easter Island’s statue quarry: Soil fertility, site formation and chronology. Journal of Archaeological Science 111, 104994; doi: 10.1016/j.jas.2019.104994