Latest topics
» Dr. Reiner Fuellmich: (September 28, 2022) A Statement Regarding the Events of the Past Few Weeks

OUT OF MIND » THE INSANITY OF REALITY » ILLUMINATI AGENDA & WORLD DOMINATION » SURPRISE! SOROS MUPPET GRETA THUNBERG BIOPIC REVEALS CAMERAS WERE ROLLING FROM DAY ONE OF HER ‘VIRAL’ RISE

Why was a documentary crew already present to film her sitting alone on the pavement? 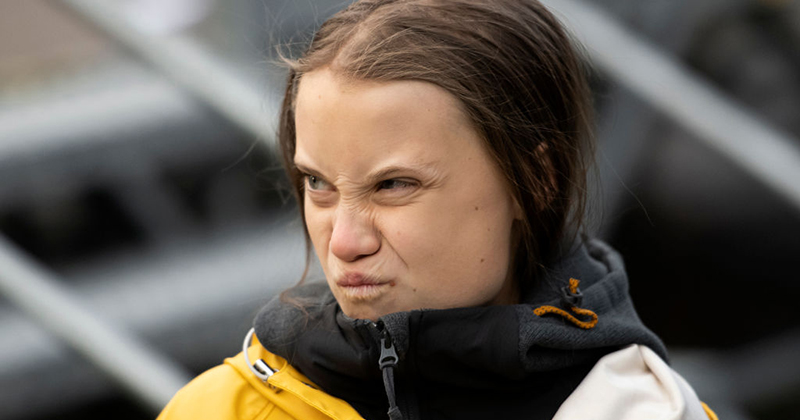 Source: RT
Teenage environmental activist Greta Thunberg is the subject of a forthcoming documentary film – made by a crew that has followed her since the early days of her school strike. Still believe her rise to fame was an accident?
Thunberg, recently crowned Time magazine’s Person of the Year, can add documentary film subject to her burgeoning resumé.
The film, tentatively titled ‘Greta,’ was announced by Deadline on Monday for a 2020 Hulu premiere. Director Nathan Grossman has followed the young climate prodigy to the ends of the Earth, from her school-striking on the sidewalk in front of the Swedish Parliament, to the high seas aboard the $4mn racing yacht Malizia II.
Grossman’s only other IMDB credit to date is a Swedish film titled “Köttets lustar” (or “Lusts of the Meat”), which, while it sounds pornographic, purports to be the story of one man “looking over his life as a carnivore.”
One might ask why, if Thunberg’s meteoric rise from her lonely sidewalk protests to hectoring the rulers of the world about her stolen future was as organic as it is presented, a documentary crew was already present to film her sitting alone on the pavement?
It’s not like her parents have been trying to make her a celebrity since she was just 12 years old, only to have their exploitative TV show idea rejected by Swedish broadcaster SVT. Never mind, all thatdid happen.
Thunberg’s parents, opera singer Malena Ernman and actor Svante Thunberg, are both famous in their own right, and it’s not difficult to see how their connections might have expedited the process through which Thunberg became the ubiquitous symbol of climate change.
Report this ad
Her rise has been meticulously choreographed, her school strike made famous on its first day by Ingmar Rentzhog of the climate change social network ‘We Don’t Have Time.’
Rentzhog, already friends with Thunberg’s parents, has already been accused of using the girl’s image to raise millions of dollars for his company – making her a household name in the process.
A year later, her larger-than-life image graces four stories of a wall in San Francisco, cafeterias in Tel Aviv (where her disapproving gaze is supposed to shame eaters away from plastic utensils), and London’s Trafalgar Square, where an ice sculpture carved in her likeness was raised in October as a teaser for what a trio of “creatives” hope will be a permanent statue of the climate crusader. A colossus bestriding the English Channel can’t be far behind.
There are already signs all is not well in Thunberg’s world, however. Even as hundreds of thousands of people took part in a school strike in Madrid to mark her appearance at the recent climate conference and the EU finally declared a climate emergency last month, solutions lag far behind the declared scale of the problem.
Thunberg herself lamented that a year of school striking has essentially accomplished nothing, emissions-wise – that the planet is no further from certain doom than it was before she began her remarkably successful campaign to shame world leaders into caring. Indeed, as more countries are pushed to declare “climate emergencies” and “do [a never specified] something” to get emissions down to zero yesterday, with no concrete solutions presented, the less likely they are to be able to produce the desired cuts.
Instead, they fall back on magical thinking – carbon offsets, cap and trade, carbon taxes, and other schemes and scams that essentially amount to bribing the climate into staying put – or, more specifically, bribing climate authorities into looking the other way while the polluting continues. Panicking never yields wise decisions, yet global authorities are taking to heart Greta Thunberg’s advice to act as if the house was on fire. If they aren’t careful, it will be.

OUT OF MIND » THE INSANITY OF REALITY » ILLUMINATI AGENDA & WORLD DOMINATION » SURPRISE! SOROS MUPPET GRETA THUNBERG BIOPIC REVEALS CAMERAS WERE ROLLING FROM DAY ONE OF HER ‘VIRAL’ RISE