OUT OF MIND » THE INSANITY OF REALITY » GOVERNMENTS & THE NEW WORLD ORDER » HOW “DUMBED DOWN” HAS AMERICA BECOME? HERE ARE 30 PEOPLE THAT ACTUALLY BELIEVE TRUMP IS NO LONGER PRESIDENT

HOW “DUMBED DOWN” HAS AMERICA BECOME? HERE ARE 30 PEOPLE THAT ACTUALLY BELIEVE TRUMP IS NO LONGER PRESIDENT

If much of the population actually thought that Donald Trump was no longer president because he was impeached by the House, what else can they be led to believe? 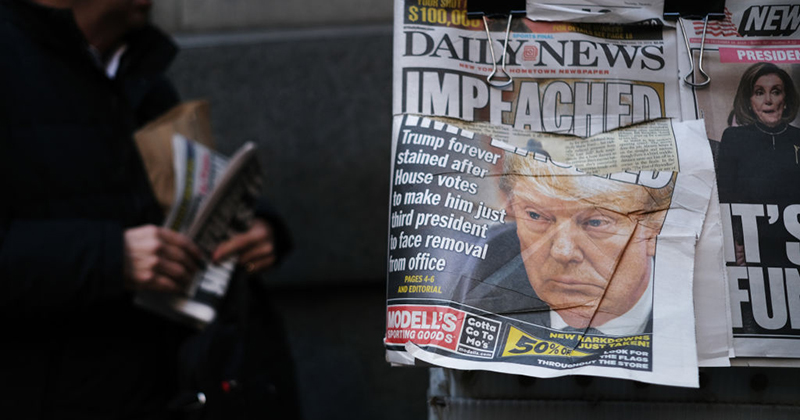 Source: Michael Snyder | End Of The American Dream ,
I knew that Americans were dumb, but I didn’t think it was this bad.
In the hours after President Trump was impeached by the House of Representatives, thousands of people immediately began wildly celebrating on social media because “Trump is not the president anymore”.
But of course that is not true at all.
Two-thirds of the Senate will have to vote to convict Trump in order to remove him from office, and at this point that seems exceedingly unlikely.
Anyone that has received even the most basic education about the U.S. Constitution should know this, so how is it possible that there are vast hordes of people out there that actually believe that Donald Trump is no longer the president of the United States?
Report this ad
This is yet another example that demonstrates how spectacularly our system of public education has failed.
Not too long ago, I wrote an article about a recent study that found that 15-year-old students in China are nearly four full grade levels ahead of 15-year-old students in the United States in math.

The rest of the world is running circles around us, and our population is getting more “dumbed down” with each passing year.
But you have to be a very special kind of stupid to actually think that Donald Trump is no longer our president.
Within this article are 30 actual Twitter posts that were posted shortly after the impeachment votes were taken, and the level of idiocy displayed is absolutely chilling.
I could almost feel my eyeballs burning as I read those tweets because of the extreme level of stupidity displayed in them.
Are Americans really this ignorant?
And the truth is that Trump has not actually officially been impeached yet.  The following explanation of this point comes from Bloomberg…

For now, Nancy Pelosi are her minions are warning that they may delay sending the articles of impeachment to the Senate, and that delay could potentially last for an extended period of time.
The Democrats want to be assured that there will be a “fair trial”, but so far Mitch McConnell and Chuck Schumer seem to be very far apart on any sort of an agreement…

Senate Majority Leader Mitch McConnell and Minority Leader Chuck Schumer met on Thursday to discuss the Senate impeachment trial that will determine whether the president is removed from office, but the leaders could not come to an agreement.
The meeting marked the first concrete step in establishing how a Senate trial will work, something that will likely begin in January. Schumer reiterated his position that witnesses and documents are needed and asked that McConnell mull over this proposal over the holidays. After the meeting, McConnell took to the Senate floor to say he was opposed to the idea and explained he wanted a minimalist resolution that outlined procedures for the start of the trial, similar to something that passed unanimously during President Bill Clinton’s impeachment. The resolution did not deal with contentious issues like testimony from witnesses, as they were voted on later during the trial.

If I was President Trump, I would actually be pushing for the trial to begin as quickly as possible, because if the vote was held today there is no way that the Republican-controlled Senate would remove him from office.
But an extended delay could potentially open the door for all sorts of shenanigans.  It is well known that there are a lot of Republicans in the Senate that are not particularly fond of Trump, and giving them lots of time to “consider their options” is not wise.
The longer this impeachment saga is drawn out, the more it is going to divide our nation.  And since 2020 is an election year, it was already promising to be a chaotic year anyway.  As I warned yesterday, all of the anger and frustration that have been building under the surface could explode at any time, and what is ahead of us is not going to be pretty.
If much of the population actually thought that Donald Trump was no longer president because he was impeached by the House, what else can they be led to believe?
We are at such a critical moment in our history, and if our forefathers could see us today they would be rolling over in their graves.  This generation has made a mockery of everything that previous generations of Americans worked so hard to build, and our society is literally coming apart at the seams right in front of our eyes.

OUT OF MIND » THE INSANITY OF REALITY » GOVERNMENTS & THE NEW WORLD ORDER » HOW “DUMBED DOWN” HAS AMERICA BECOME? HERE ARE 30 PEOPLE THAT ACTUALLY BELIEVE TRUMP IS NO LONGER PRESIDENT