WikiLeaks Still Holding Powerful to Account Even as Assange “Slowly Dies” in Prison Tue Dec 31, 2019 11:19 am


Julian Assange is being kept in solitary confinement 23 hours per day, often sedated.

Photo credit: Espen Moe, Flickr
(MPN) — Julian Assange is dying inside Belmarsh Prison in London. Those are his own words, relayed through English journalist Vaughan Smith, who revealed that the Wikileaks founder called him on Christmas Eve to share his greetings. Smith also divulged that Assange told him he is kept in solitary confinement 23 hours per day and is often sedated.


His treatment has elicited protests around the world, from journalists, news organizations, human rights groups and celebrities. Last week a group of Australian doctors asked Foreign Minister Marise Payne to evacuate Assange to an Australian hospital, citing his inhumane treatment. In a statement they said:


“The potentially fatal medical consequences of prolonged psychological torture are inherently unpredictable, and could strike at any time. Accordingly, no doctor, no matter how senior, can offer any legitimate assurances regarding Julian Assange’s survival or medical stability while he continues to be held in Belmarsh Prison.”

Julian Assange called my family from prison this Christmas Eve while we were preparing for dinner. Please spare a thought for him. He spoke to my wife, Pranvera and our girls - who remembered Christmas with him in 2010 when he was our guest while on bail. #politicalprisoners 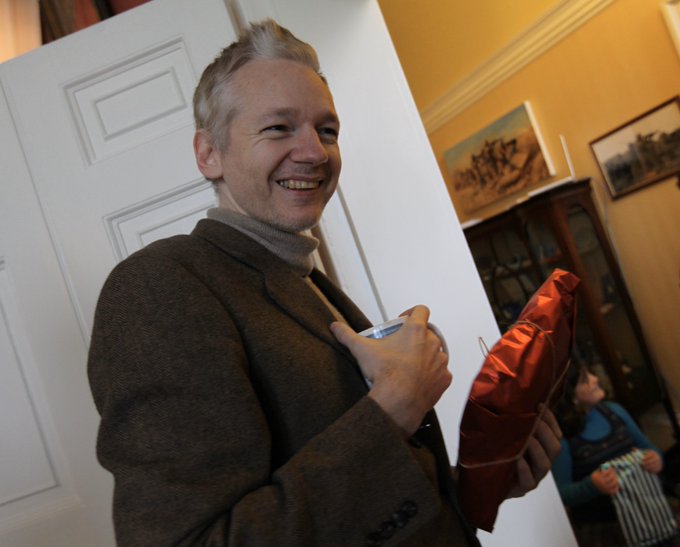 His mother Christine also made a plea for her son to be released and allowed to return home to Australia with her.

“All I want for Christmas is my son Julian to be home safe with his family, under the protection of his country, to be free from this nine-year unlawful and brutal political persecution and to heal from the human rights abuses and torture which have damaged his mind and body,” she said.
Assange is currently facing extradition to the United States where he faces multiple charges, including soliciting and publishing classified information and conspiring to hack into a U.S. government computer. Ms. Assange was fearful of the consequences of the U.S. government capturing her son but was adamant he had done nothing wrong. “If he ends up in US hands, there will be a show trial and there will be nothing fair or just about it. He will never see the light of day again. He is accused of engaging in multi-award winning journalism, not hurting anyone” she said.
Assange originally worked with The Guardian to publish high-profile leaked documents. Yet the British newspaper later turned on him, publishing a series of questionable news reports about him that helped lay the groundwork for his arrest and imprisonment. A particularly infamous report published last year claimed that he held a series of meetings with former Trump campaign manager Paul Manafort and unnamed Russians inside the Ecuadorian Embassy in London where Assange was trapped for years. It reported as fact that they discussed breaking him out and publishing Hillary Clinton’s stolen emails.

The story was almost immediately exposed as a hoax based on information from a known charlatan who had previously burned The Guardian, and even its author, Luke Harding, with false information before. Yet it took The Guardian almost a year to review the article and admit that it was misleading, by which time the damage had been done and Assange was intimately linked with Russia in the public imagination.
Harding is a notorious RussiaGate proponent, writing a book called Collusion: How Russia Helped Trump Win the White House. Yet when challenged by journalist Aaron Maté, he was unable to defend even the title of his book, let alone its thesis, disconnecting the interview prematurely after being pressed on his claims.

A War on Whistleblowers

Assange’s treatment serves as an example to anyone who plans to challenge power and constitutes a continuation of President Obama’s war on whistleblowers. Chelsea Manning, who leaked the infamous Collateral Murder video, which showed U.S. military personnel massacring civilians, including Reuters journalists, in cold blood, has been re-incarcerated and faces a debt of nearly $500,000 for refusing to testify against the Wikileaks founder. Meanwhile, Edward Snowden remains exiled in Russia, claiming he would “likely die in prison for telling the truth” if he ever returned to the United States.

In addition to Manning’s leaks and publishing the Podesta emails, Wikileaks has revealed to the public shocking procedures at Guantanamo Bay, the dumping of toxic waste in Africa and the extent of the U.S. role in Yemen. It continues to expose information of great utility. Today it published documents showing high officials at the Organization for the Prohibition of Chemical Weapons ordered the deletion of all evidence that suggested civilians in Douma, Syria were not killed with chemical weapons, thereby laying the groundwork for U.S. intervention in Syria.
On the topic of Assange’s failing health, London based investigative reporter Matt Kennard stated that it was a major task for all journalists and engaged citizens in 2020 to save his life. If Assange dies in Belmarsh or is sent to meet his fate in the U.S., “we all lose a major slice of our freedom, one we’ll probably never get back. High stakes,” he said.