Like
many folks, Occupy Wall Street has been some doing good work in the
aftermath of Hurricane Sandy, helping people on the ground.

Now OWS is launching the ROLLING JUBILEE,
a program that has been in development for months. OWS is going to
start buying distressed debt (medical bills, student loans, etc.) in
order to forgive it. As a test run, we spent $500, which bought $14,000 of distressed debt. We then ERASED THAT DEBT.
(If you’re a debt broker, once you own someone’s debt you can do
whatever you want with it — traditionally, you hound debtors to their
grave trying to collect. We’re playing a different game. A MORE AWESOME
GAME.)

This is a simple, powerful way to help folks in need — to free them from heavy debt loads so they can focus on being productive, happy and healthy. As you can see from our test run, the return on investment approaches 30:1. That’s a crazy bargain!

Now, after many consultations with attorneys, the IRS, and our moles in the debt-brokerage world, we are ready to take the Rolling Jubilee program LIVE and NATIONWIDE, buying debt in communities that have been struggling during the recession.

We’re kicking things off with a show called THE PEOPLE’S BAILOUT at Le Poisson Rouge on Thursday, November 15. It will also stream online, like a good ol’-fashioned telethon! 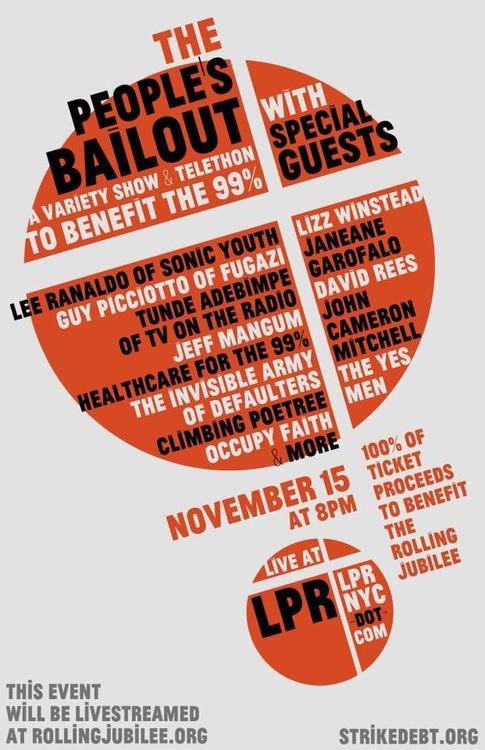 Friends, the line-up is insane. Performers include:

- TUNDE ADEBIMPE and KYP MALONE (TV on the Radio)

and other great talents including a group of radical nuns! I’ll be playing the role of JERRY LEWIS, emceeing in my tuxedo from MEN’S WEARHOUSE.

This
will be a joyful, positive night about people banding together and
subverting a predatory financial system in order to help each other.
BOOM! That’s a movie pitch right there, goddamn why am I not a Hollywood
mogul?!

Anyway, HERE IS THE INFORMATION about THE PEOPLE’S BAILOUT:

- The LIVE STREAM will be at http://rollingjubilee.org (you’ll be able to donate online)

HOW YOU CAN HELP:

- Spread the word! Share this info with your friends, family, and followers
- Donate money via http://rollingjubilee.org

- Host a live-stream party! Get together with folks
in your town and watch the show online and donate money and maybe even
drink a beer if you’re feeling crazy.

- If you are Jerry Seinfeld or Bill Cosby: Call me about doing a set at the live show! We’ll fit you in.

Okay, that was a really long tumblr post. I feel very vulnerable right now. Thanks for reading.

Bye!
—David Rees
Thanks to: http://soundofheart.org

» “Debt Against the People”: Analysis and History of the Global Debt Crisis
» The World Global Settlements Mortgage Debt Forgiveness is HAPPENING!
» People Magazine Attempts To Normalize “Blood Clots Like Hailey Bieber’s Happening in ‘Younger and Younger People,’” Ignores COVID Vaccine Injury
» The Trillion Dollar Coin: A Debt Solution for the People – by Ellen Brown
» MAX IGAN - Most People Have No Idea What's Happening