Sounds
to me like Obama is now going to clean house! Be sure to check the
Related Articles section at the end for more info on this topic. ~J 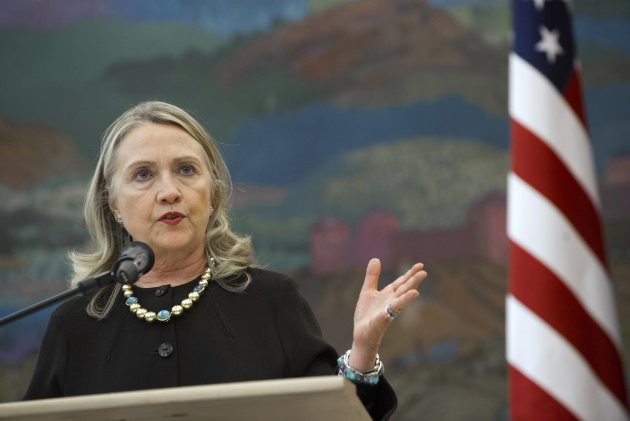 Come January, the Obama administration will begin again, and a number
of people whose names and faces have grown familiar the past four years
will leave the public realm for other livelihoods.

Clinton’s position is perhaps most visible. Her management of the
department and leadership of America’s global diplomacy have won praise
from Republicans and Democrats, and the former New York senator and
first lady is thought by many to be the most popular member of Obama’s
Cabinet.

Foreign policy experts see her departure as leaving a gap, because
significant problems remain: Iran’s suspected ambitions to develop
nuclear weapons; violent civil war in Syria; continued fallout from the
“Arab spring”; and continuing conflicts in Afghanistan and Pakistan
among them. New challenges include China’s slowing economy, coupled with
its increasing aggressive response to territorial disputes.

So whose names are being talked about to take over State?

Sen. John Kerry, D-Mass., who leads the Senate Foreign Relations
Committee, has emerged as a favorite. Kerry’s major strength is deep and
longstanding experience on most vital foreign policy issues; he would
also likely win easy confirmation by colleagues. But unlike his
predecessor, Kerry may struggle to be welcomed into Obama’s inner
circle.

Kerry’s most-cited rival is Ambassador to the United Nations Susan
Rice, who, unlike Kerry, already has “inner circle” credentials. She has
worked daily for years alongside diplomats from America’s allies and
foes. However, her controversial role in explaining the Sept. 11
Benghazi attack to the public could prompt a difficult confirmation
process. Some Republican aides are already saying privately she
shouldn’t get the job.

It’s also possible a Republican might come forward. Former Utah Gov.
Jon Huntsman worked for Obama as ambassador to China before returning to
make a failed bid for the presidency. One senior Republican
foreign-policy hand describes his work in Beijing as “superb, top-rate.”

There’s always a chance of promotion from within, such as Deputy
Secretary of State William Burns. But what about an outsider? Brookings
Institution President Strobe Talbott held Burns’ job under President
Bill Clinton.

It’s not known yet whether Defense Secretary Leon Panetta plans to
leave. But if he does, two front-runners are being mentioned for the
job: His deputy, Ashton Carter, and Michele Flournoy, a former
undersecretary at the Pentagon. Another possibility, though somewhat
unlikely, might be retired independent Sen. Joe Lieberman of
Connecticut.

Speculation in Washington also
suggested Director of National Intelligence James Clapper might be
seeking an exit. He hasn’t said he will leave, but if he does, Flournoy
is a possible replacement. CIA Director David Petraeus was also
mentioned, but news on Friday of his resignation of his position due to
an extramarital affair will likely take him off the list. Petraeus, in
turn, will be replaced by acting director Michael Morell.

With the economy still
lackadaisical, and in light of Obama’s campaign promises to hasten a
more tangible recovery, picking a replacement for outgoing Treasury
Secretary Geithner will be crucial.

So far those mentioned as
potential successors include two Clinton administration veterans:
Clinton chief of staff Erskine Bowles and current White House chief of
staff Jack Lew. In the coming weeks, Lew will face a big test in talks
with Republicans centered on the “fiscal cliff.” Bowles’ credentials,
though, would send a message that debt reduction is a priority.

What about a Republican? Robert
Zoellick has served as World Bank president, U.S. trade representative
and deputy secretary of state. When he was appointed adviser to GOP
presidential nominee Mitt Romney, the amount of backlash from hard-line
conservatives reminded everyone that he might have had a bit more luck
joining the other team.

Undersecretary of the Treasury
for International Affairs Lael Brainard isn’t at the top of many lists,
but some insiders say she would have a lot of heads nodding their
approval on Capitol Hill and overseas.

Finally, a long-shot—but not out of the question: New York City Mayor Michael Bloomberg.

With so many large-scale
compromises to be reached on both foreign and domestic fronts, it
remains to be seen how many Cabinet appointments may serve as gestures
from the Obama administration to Republican opposition that still holds
power in the House.

—With additional reporting from Brendan James in New York.

Posts : 3470
Join date : 2012-02-10
Age : 66
Location : Florida
He didn't remove them- They are leaving because they don't want any part of his presidency- If he's so great, they why does he want to take damn near 50% of our investment? That's probably why this hasn't happened yet- He wants to wait until 2013 to screw us all, and he will, watch and see- I hate to tell you this, BUT he is not the person you think he is- He has agreed with 'Killary' Clinton, to let the 'U.N. to get with the United States to take our guns away, along with just about all the rest of our rights-And this asshole says that a 'pre-mature' baby is NOT a person? WOW, what is up with that? I'm sorry, but that right there should tell the story of just who this dipwad is-He doesn't care about his life, our life, or anything to do with this country- He hates us, he hates this country, and especially the poor people in it-And he's not even the 'Legal' president-He is one deranged, ignorant and sick bastard- We'll all see in the end- IF we're still alive-