On January 20, 2020 while watching NASA's live feed, a resident of Brighton, UK noticed a chevron UFO in the background of the International Space Station. The chevron UFO is surrounded by mystery and often compared to the black knight UFO. Besides you may wonder why NASA and other space agencies use the chevron logo.

Witness report: I was on my phone watching the NASA’s spacewalk 63 aboard the ISS aired in real time yesterday on the 20th of January 2020, around 6 hours and 30 mins into the space walk the last astronaut was preparing to enter back into the air lock for depressurization and re-entry into the interior of the ISS.

I was watching Jessica on her way to the air lock impressed with the quality of the camera being used filming the final moments of the spacewalk on the exterior of the ISS, and then I noticed something strange in the bottom right corner of the screen.

In total for the time I viewed the UFO on screen it stood perfectly still for about three seconds before shooting off which took about 0.5 seconds.

Honestly I briefly thought it was an insect given it’s appearance as a tilted letter T, assuming that the shaft of the T was the body and the extremities either side (longer than the shaft of the t like shape) were perhaps it’s wings.

I then looked to see if it was attached to the ISS in any way hoping that perhaps a beam of light might reflect of a wire demonstrating that this T shaped object was connected to the exterior of the ISS. 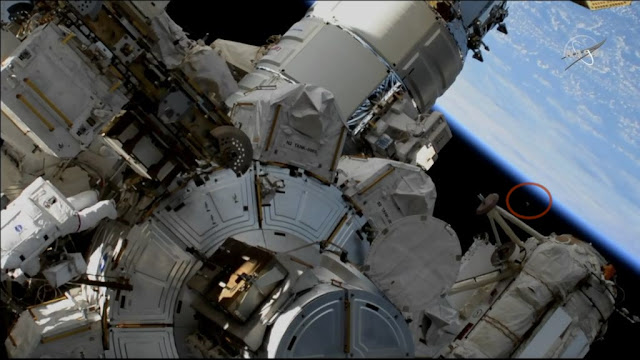 Whilst doing so I had a sudden realization that it wasn’t attached at all and that it was perhaps a UFO. I decided to quickly screenshot it and upon doing so it zoomed of SO fast it was like, god I don’t know it was gone and shrunk to a point of infinity in less than the space of a second.

It did not gradually accelerate it just instantaneously shot off into the distance exactly following the direction the camera was facing until it could no longer be seen.

The video feed in use soon after changed to a different camera aboard the station. 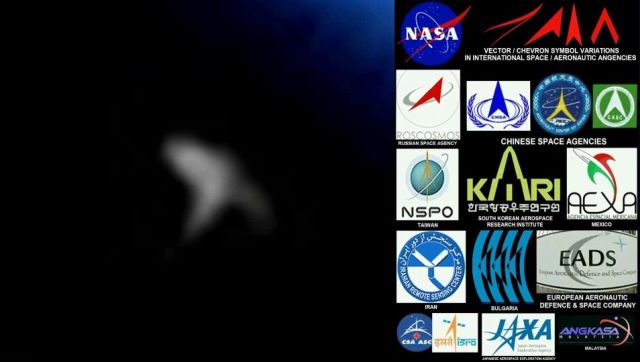 NASA and other space agencies use the chevron logo.
The photo of the UFO, submitted to Mufon, was about 80% during its shooting off phase, it was originally about 5 times closer and larger looking due to its close proximity. You can see that isn’t just some glitch in the camera lens as the sun light hitting the object is on the same side as the sun light hitting the ISS.