Bumblebee declines have been attributed to a handful of factors, including lack of flowers. Not all flowers are used equally by bumblebees, and determining which flowers they use can aid bumblebee conservation by identifying the specific plants they need to thrive. In a new study, a team of researchers examined which flowers bumblebees select in the Plumas National Forest in the Sierra Nevada region of California; they compared which species of flowers the bees used relative to the availability of each flower species across the landscape; they found that each bumblebee species in the study selected a different assortment of flowers, even though the bees were foraging across the same landscape. 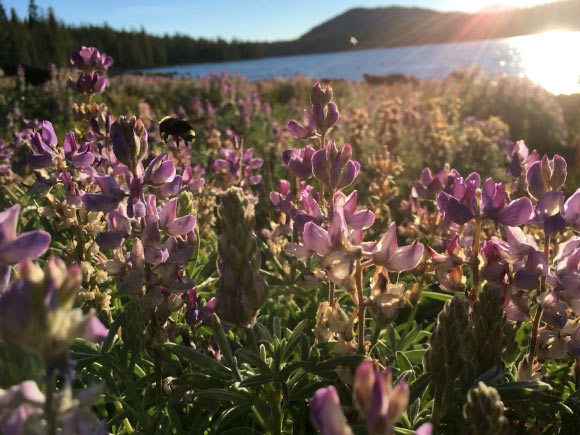 Bombus vosnesenskii flies in a field of lupine flowers. Image credit: Spencer Hardy, the Institute for Bird Populations.
“It’s important to consider the availability of plants when determining what’s selected for by bees,” said Dr. Jerry Cole, a biologist with the Institute for Bird Populations.
“Often studies will use the proportion of captures on a plant species alone to determine which plants are most important to bees.”
“Without comparison to how available those plants are, you might think a plant is preferentially selected by bees, when it is simply very abundant.”
Dr. Cole and colleagues captured, identified, and released bumblebees at over 400 sample plots in the Plumas National Forest.
They recorded which flower each bee was captured on and estimated the availability of flowers in the plot.
Though they captured bumblebees on over 100 different species of flower, only 14 of these plant species were preferentially selected by any of the bumblebee species. 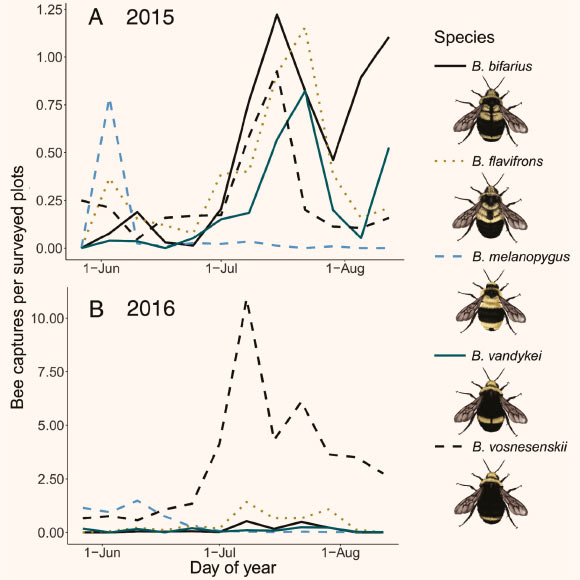 Weekly capture rate (bumblebees captures/plots surveyed per week) for the five most commonly captured bumblebee species in 2015 (A) and 2016 (B); note that axis scales differ between years. Image credit: Cole et al, doi: 10.1093/ee/nvz159 / Lauren Helton.
Thirteen species of bumblebees were captured; among the five most common species (Bombus vosnesenskii, Bombus bifarius, Bombus melanopygus, Bombus vandykei, and Bombus flavifrons), each selected a different assortment of flowers, and each selected at least one flower species that was not selected by the other bumblebee species.
In addition, the researchers found some previously undocumented bumblebee-plant associations.
For instance, Bombus bifarius preferentially selected thickstem aster flowers (Eurybia integrifolia), while Bombus melanopygus preferentially selected Rydberg’s penstemon flowers (Penstemon rydbergii).
The team also found that bees use different species of flowers at different times in the summer, as early blooming flowers are replaced by late-blooming flowers.
“We discovered plants that were big winners for all bumblebee species but, just as importantly, plant species that were very important for only a single bumblebee species,” said Dr. Helen Loffland, a meadow species specialist with the Institute for Bird Populations.
“This study allowed us to provide a concise, scientifically based list of important plant species to use in habitat restoration that will meet the needs of multiple bumblebee species and provide blooms across the entire annual lifecycle.”
The results are published in the journal Environmental Entomology.
_____
Jerry S. Cole et al. Plant Selection by Bumble Bees (Hymenoptera: Apidae) in Montane Riparian Habitat of California. Environmental Entomology, published online January 28, 2020; doi: 10.1093/ee/nvz159