COVID-19: US military prepping for coronavirus pandemic plus MORE

Posted on February 14, 2020 by The Extinction Protocol

Preparation for the inevitable: U.S. Northern Command is executing plans to prepare for a potential pandemic of the novel coronavirus, now called COVID19, according to Navy and Marine Corps service-wide messages issued this week. An executive order issued by the Joint Staff and approved by Defense Secretary Mark Esper this month directed Northern Command and geographic combatant commanders to initiate pandemic plans, which include ordering commanders to prepare for widespread outbreaks and confining service members with a history of travel to China. The Navy and Marine Corps messages, issued Tuesday and Wednesday, respectively, reference an executive order directing U.S. Northern Command to implement the Department of Defense Global Campaign plan for Pandemic Influenza and Infectious Diseases 3551-13.
The document serves as the Pentagon’s blueprint for planning and preparing for widespread dispersion of influenza and previously unknown diseases. U.S. Northern Command said Wednesday it was directed the Joint Staff Feb. 1 to commence “prudent planning” in their assigned role synchronizing the department’s plans for pandemic flu and disease. But in no way “does the planning indicate a greater likelihood of an event developing. As military professionals, planning for a range of contingencies is something we owe the American people,” Navy Lt. Cmdr. Mike Hatfield said. “We coordinate with other combatant commands to assess potential impacts in the event of a pandemic and we ensure the U.S. military is poised to respond as required,” Hatfield said in a statement. “The military profession fosters a culture of planning, and the fact that we are coordinating planning efforts across the geographical combatant commands is consistent with how we prepare to respond, if directed.”  –Military Times

The numbers keep rising: The coronavirus death toll has risen to 1486 with a total of 65,213 confirmed cases, making an increase on yesterday’s whopping jump. China’s Hubei province reported an extra 4823 coronavirus infection cases and 116 new deaths, in the second day after the region at the centre of the outbreak changed its method for counting infections. This was lower than the 14,840 cases that Hubei added when it first started counting patients with the new method. Yesterday the coronavirus broke a tragic record with the deadly illness killing 242 people in China in a single day.
The 242 deaths from Hubei were more than double the announcement of the previous day. The commission said that it had begun including cases diagnosed through new clinical methods from Thursday.  WHO chief Tedros Adhanom Ghebreyesus warned any apparent slowdown in the spread of the epidemic should be viewed with “extreme caution.” “This outbreak could still go in any direction,” he told a briefing in Geneva. –News.com.au

Coronavirus traced to the British Crown Fig. 1—The Queen's company The Pirbright Institute holds U.S. Patent No. 10,130,701 on CORONAVIRUS. Pirbright tracks back to SERCO, which has the contract with the U.S. Patent Office to award its own patent application! This "inequitable conduct" in patent legal terms is fraud and invalidates the claim while the world fights this British- American Pilgrims Society-inspired emerging pandemic, in our opinion. See THE PIRBRIGHT INSTITUTE, Co. No. 00559784. (Jan. 07, 1956). Certificate of Incorporation and related records. Companies House (UK).
Queen Elizabeth II is the long-time Patron of the British-American Pilgrims Society (1902-present). Sir Henry Solomon Wellcome pharma-propagandist-spy was a Pilgrims secret founding member along with Winston Churchill, propagandist John Buchan & the Daily Telegraph and Daily Mail's Lords Burnham and Northcliffe. See The Pilgrims Society of Great Britain, United States, Profile Books, London (2002,2003) (Jan. 2002, p.1: "As Patron of the Pilgrims it has given me great pleasure to support the unique contribution which the Society has made to Anglo-American relations over the years."). See Pilgrims Society controls the Press .
Pirbright Funders:

AMERICAN AND BRITISH PATENT OFFICES ARE FULLY COORDINATED THEFT & WEAPONIZATION FACTORIES FOR THE PILGRIMS SOCIETY—THE TECHNOLOGY SOURCE FOR CONTINUOUS WAR: SERCO has controlled the U.S. Patent Office processes since 20006 to the present. That's right, a BRITISH company controls AMERICA'S Patent Office where America's best and brightest are fooled into thinking it is a fair process. In fact, as we shall prove below, British and American Pilgrims Society media, intelligence and banking are weaponizing everything they touch. See AFI. (Nov. 22, 2017). The Weaponization of Social Media Should Concern Us All. Americans for Innovation.

Base Photo: Sean Gallup / Getty Images. Fair Use Educational purposes only.
ORIGINAL POST
Reader Notice: New evidence is flooding in on Coronavirus and The Pirbright Institute. Therefore, rather than wait until all the evidence links are processed, we decided to go ahead and publish. Return several times over the next days to pick up the new evidence.
(Jan. 30, 2020)—The Coronavirus outbreak was just declared a health emergency by the World Health Organization (WHO). Tellingly, WHO is one of the Coronavirus creators, as we will show below. The Coronavirus was invented by The Pirbright Institute at posh, well-appointed laboratories located in Woking, Surrey, England just outside London’s M25 outer belt.
Bookmark:#coronavirus-pirbright-and-serco | https://tinyurl.com/vwoeat2
Video available at source link below.
The Pirbright Institute is a British charity (Co. No. 00559784) that has a charter from the Queen. It is controlled by the UK Government’s Biotechnology and Biological Research Council (BBSRC). In turn, UK Research and Innovation oversees BBSRC. Fig. 3—Sir Geoffrey E. Pattie, Pilgrims Society, Keeper of the Monarch's Golden Shares, founder of SERCO.
BBSRC was created in 1994 by taking over the biological science activities of the Science and Engineering Research Council (SERC). In 1986, SERC was defunded by Sir Geoffrey E. Pattie, the Minister of State for Industry and Information. He simultaneously incorporated a commercial SERCO and merged RCA into it. Later he took control of Marconi, then merged it into GEC.
See AFI. (Apr. 20, 2018). The shadow government uses SES, Serco and OPIC as portals into horrific corruption. Americans for Innovation.
See also AFI. (Jan. 11, 2018). Meet The Person Who Can Remotely Crash Planes And Can Read Your Mind. Americans for Innovation. Fig. 4—Viscount Alfred Milner, Co-founder, Pilgrims Society (Jul. 16, 1902).
Our research has tracked the Burroughs Wellcome & Co. involvement with bogus vaccines back to their experiments on 60,000 whites and black in British concentration camps during the Second Boer War that was promoted by the disciples of Cecil Rhodes like Viscount Alfred Milner, Winston Churchill and John Buchan, among others—all founders of the Pilgrims Society in London (1902), then New York (1903). Fig. 5—Masks Help! A pernicious rumor circulates that surgical masks do not help protect you from breathing in the airborne Coronavirus. This makes no sense. Of course it helps. If someone sneezes directly on you from three feet away, then of course you will inhale whatever pathogens they may have. But, say you are able to place even a 2 ft. square piece of cardboard between you and in front of the sick person's face. That will stop many of the airborne particles. Not all, but many if not most. That's the benefit of a surgical mask. Is it 100% effective? No. But highly effective? Of course it is. Otherwise, doctors and nurses would not use them in hospitals and clinics so religously.
See AFI. (Oct. 24, 2019). The 200-year Information War: The UK-U.S. Pilgrims Society controls the Press that directs intelligence (spy-lies) to bend words and culture to atheistic social fascism. Americans for Innovation.
On Jul. 20, 2005, Sir Geoffrey E. Pattie formed Strategic Communications Laboratory PR firm—the parent of Cambridge Analytica and a key antagonist in the Trump-Russia hoaxes.
See AFI. (Jun 03, 2018). Spy-gate is directed by the Crown's courtiers in the UK, not by Russia. Americans for Innovation. Video can be accessed at source link below. 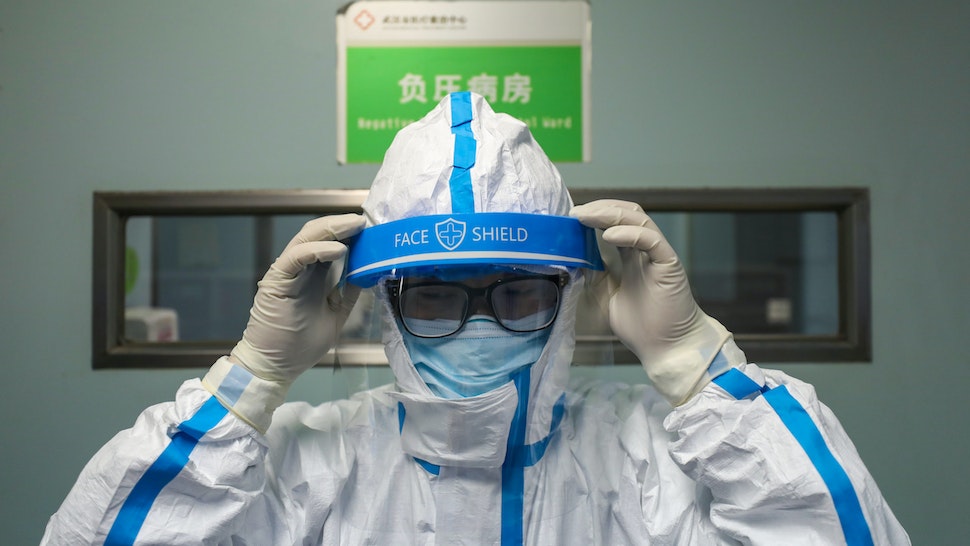 “The number of reported cases has been rising more quickly after the hardest-hit province changed its method of counting them Thursday. There are now 63,851 confirmed cases in mainland China, of which 1,380 have died,” The Associated Press reported. “Hubei province is now including cases based on a physician’s diagnosis and before they have been confirmed by lab tests. Of the 5,090 new cases, 3,095 fell into that category.”
Worldwide, there have been more than 64,000 cases reported and over 1,400 deaths from the coronavirus.
The news comes as China continues to expand its dragnet over larger and larger areas where the communist party is on a “wartime” campaign to round up everyone who may be infected with the virus.
“In their zeal to execute the edict, officials in Wuhan, a metropolis of 11 million, have haphazardly seized patients who have not yet tested positive for the coronavirus, in some cases herding them onto buses with no protective measures where they risked infection from others,” The New York Times reported. “After that, patients have been sent to makeshift medical facilities that don’t provide the support they need to recover. With little to no dedicated medical staff on hand to help, some patients die.”

The number of people infected with the virus is so high that China has had to convert stadiums, exhibition centers, hotels, schools, and other facilities into makeshift hospitals.
The Washington Post reported that the economic fallout from the epidemic shows no signs of slowing down and is “expected to linger for months even if the flulike illness is soon brought under control, economists and supply chain experts say.”

“The Chinese epidemic’s aftereffects will probably cause the global economy to shrink this quarter for the first time since the depths of the 2009 financial crisis, according to Capital Economics in London,” The Post reported. “Chinese factories had been scheduled to reopen Feb. 10, after a Lunar New Year holiday that had been extended for several days because of the medical scare.”
Mohamed El-Erian, chief economic adviser at Allianz, a German financial services company, told The Post, “I worry that it’s going to be a bigger deal than most economists are treating it as right now. It will take time to restart all these economic engines.”

The outbreak could increase pressure on U.S. officials to confront a separate but somewhat related issue: the fact that China controls a significant portion of the manufacturing of pharmaceuticals.
The Hill reported:

As recently as the 1990s, the U.S., Europe and Japan manufactured 90 percent of the global supply of key ingredients for the world’s medicines and vitamins. China now has become the largest global supplier of active ingredients and chemical building blocks needed to make many prescription drugs and over-the-counter products.
Millions of Americans ingest drugs made in China — and they likely don’t know it. Hundreds of thousands of physicians prescribe them; the medicines may be packaged to look like all-American products, but they are not.

Reps. Anna Eshoo (D-CA) and Adam Schiff (D-CA) wrote in an op-ed last year that the trade war could provoke China into using the leverage that it has in pharmaceutical as a way of creating pressure on the U.S.
“We should not be held hostage by any foreign country,” Eshoo told NBC News. “We need to move away from any country having a monopoly on the ingredients that we depend upon our antibiotics — anthrax [vaccine], penicillin, high blood pressure drugs.”
This report has been updated to include additional information.