OUT OF MIND » BREAKING NEWS & HOT TOPICS » COVID-19 » COVID-19: Coronavirus continues its race across the globe

COVID-19: Coronavirus continues its race across the globe

COVID-19: Deadly coronavirus continues its race across the globe

Posted on February 15, 2020 by The Extinction Protocol

Europe reports first death: A Chinese tourist died in France, the first death outside Asia from the coronavirus, the health ministry said, as the global toll now exceeds 1,500. U.S. citizens and their families on a quarantined cruise ship off the Japan coast, the largest infection cluster outside China, will be evacuated. The U.K. discharged all but one infected patient.
China confirmed 2,641 new confirmed as the virus showed no signs of abating outside the country. Japan, Singapore, Thailand and Malaysia on Saturday confirmed new cases. An 80-year-old Chinese tourist died in Paris, becoming the first fatality of the coronavirus in Europe, France’s health ministry said. The man’s daughter, 50, was also infected and remains in a hospital in Paris. There are now 10 remaining cases in France and four of those have been released from hospital after recovering from the virus, Health Minister Agnes Buzyn said on Saturday. –Yahoo

As of February 15, 2020 – map depicts the regions where the COVID-19 virus has spread to
Asymptomatic Carrier Hawaii — A man in his 60s tested positive for the 2019 Novel Coronavirus (COVID-19) shortly after returning from a trip to Hawaii. He has not visited China recently. The man is from the Aichi Prefecture in central Japan, and visited Maui and Oahu from January 28th to February 7th. Health officials say the man visited Maui from January 28 through February 3. He showed no symptoms at the time. He took Hawaiian Airlines flight HA265 from Kahului to Honolulu on Feb. 3, the same day he reported having cold-like symptoms. While on Oahu, the man stayed at the Grand Waikikian by Hilton Grand Vacations. Officials say he did not have a fever. Shortly after returning home on February 8th, he was hospitalized with a high fever. He was then diagnosed with pneumonia, and ultimately tested positive for COVID-19.

The governor’s exact words during the news conference were “This is a serious concern.” He adds that the state is prepared for this. Health officials say they believe the man contracted the virus before he got here or on his way here from Japan. “The best evidence we have suggests he was infected while he was in Japan before he came to Hawaii,” said Dr. Bruce Anderson, health department director. The incubation period for Coronavirus is up to 14 days. So, the timeline fits that he could have been infected before leaving Japan. Officials also stress that since the man did not have a fever while he was on either island, he was less likely to spread the infection here.
“That’s somewhat reassuring to us because we know when you have fever, you’re more likely to be more infectious,” said state epidemiologist Dr. Sarah Park. “However, as a precaution we are working with partners to identify potential close contacts.” Officials say close contact means actually sitting down and having a conversation with the man, as opposed to just walking by him. Once those people are found, they will likely be quarantined. –KTSM

Nearly 10k Military Personnel From 110 Nations In Wuhan China Weeks Before Coronavirus Outbreak!
VIDEO:
An important update regarding Wuhan China, which is ground zero for the Coronavirus / Covid-19 outbreak, which is now reported to have gone global, as the Chinese government has now banned people in Wuhan from leaving their homes all together. One aspect which is very interesting and has been covered extensively here, is Event 201. The pandemic exercise simulating a global Coronavirus pandemic which took place on October 18th 2019 only 6 weeks before the first case of the virus was reported in Wuhan China. What not many people are talking about, is that on this exact same day, October 18th, the 2019 Military World Games held its opening ceremony followed by a U.S. mens soccer match in Wuhan China, ground zero of the outbreak! This report explores to possibility of a covert operation, which may have coincided with this event, using the event as cover to gain access to China, as nearly 10,000 military personnel from 110 countries were all in Wuhan China at the same time, only weeks before the outbreak began.
Links Did Bill Gates & World Economic Forum Predict Coronavirus Outbreak? An Inside Look May Shock You! https://www.activistpost.com/2020/01/… Interview: Author of US BioWeapons Act Believes The WHO & China Are Lying About The Coronavirus https://www.activistpost.com/2020/02/… Coronavirus A Bioweapon? White House Investigates, As Military Sets Up Quarantine Sites Across U.S. https://www.activistpost.com/2020/02/… 2019 Military World Games https://en.wikipedia.org/wiki/2019_Mi… 7th International Military Sports Council Military World Games https://www.defense.gov/Explore/Spotl… 2019 CISM MILITARY WORLD GAMES https://www.dvidshub.net/feature/2019… Event 201 http://www.centerforhealthsecurity.or… U.S. delegation arrives in Wuhan for Military World Games http://www.xinhuanet.com/english/2019… Over and over again, the military has conducted dangerous biowarfare experiments on Americans https://www.businessinsider.com/milit…

More Than 1,700 Health Workers In China Have Been Infected With New Coronavirus 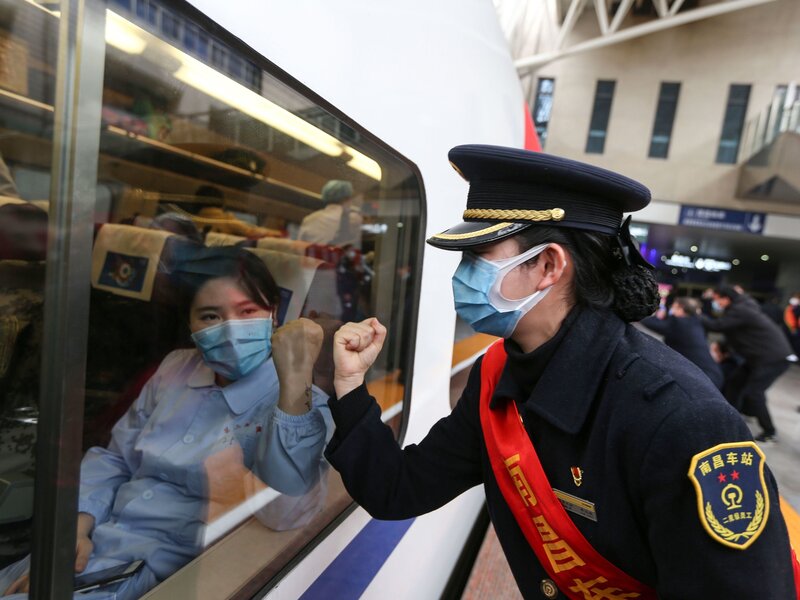 A Chinese train attendant and medical worker gesture to each other, as the train prepares to depart for the city of Wuhan, the epicenter of the novel coronavirus outbreak.
AFP via Getty Images
Updated at 3:15 p.m. ET
More than 1,700 health workers in China have been infected with the new coronavirus, according to Chinese officials. Zeng Yixin, vice minister of the country’s National Health Commission, announced Friday that at least 1,716 health workers had confirmed cases — and that six have died from the disease now known as COVID-19.
“At present, the duties of medical workers at the front are indeed extremely heavy,” Zeng told a news conference, according to Reuters. “Their working and resting circumstances are limited, the psychological pressures are great, and the risk of infection is high.”
Those cases are among tens of thousands already reported in mainland China, which has been hardest hit by the fast-spreading strain. Chinese authorities announced that confirmed coronavirus cases rose by just over 5,000 on Friday — the second spike in as many days, after a change in reporting methods drove the number higher Thursday.
Worldwide, there were at least 64,000 confirmed cases as of Friday afternoon, and more than 1,300 deaths — the vast bulk in mainland China, and particularly in Hubei province, the center of the outbreak. 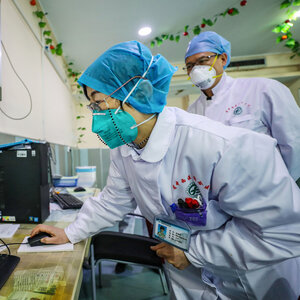 How COVID-19 Kills: The New Coronavirus Disease Can Take A Deadly Turn

The World Health Organization announced Friday that a team of 12 international investigators is expected to touch down this weekend in China and begin working with a team of Chinese experts.
“The goal of the joint mission is to rapidly inform the next steps in the COVID-19 response and preparedness activities in China and globally,” WHO Director-General Tedros Adhanom said during a briefing. “Particular attention will be paid to understanding the transmission of the virus, the severity of disease and the impact of ongoing response measures.” 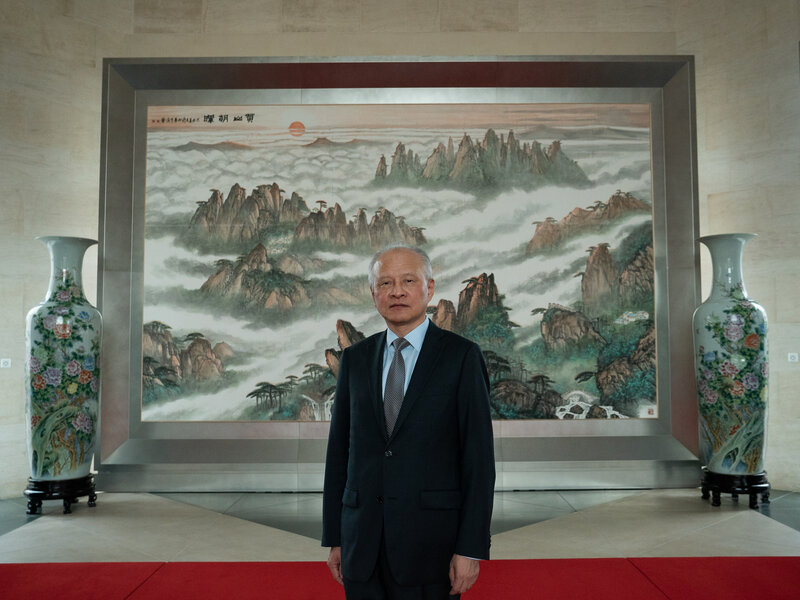 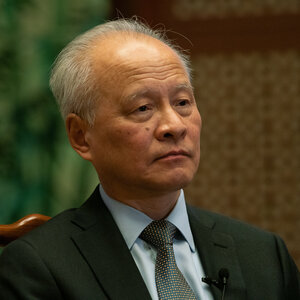 But he stops short of acknowledging any particular mistakes made by Chinese officials or offering a direct apology to Li’s family. Cui also would not explain why the top Communist Party officials in Hubei were recently relieved of their duties.
“Naturally, under such special circumstances, people who can do the job better should be given the responsibility to do it,” he said. “And this is a very heavy responsibility.”
Worries about the Tokyo Olympics
Questions have begun to swirl around the Summer Olympics, which are slated to begin just over five months from now in Tokyo.
Japan has reported more than two dozen confirmed cases of the coronavirus and one death from COVID-19. The Diamond Princess cruise liner has sat quarantined for days in the port of Yokohama, near Tokyo. Nearly 220 people out of some 3,700 passengers and crew have been infected with the virus. The number of cases and the country’s proximity to the outbreak in China have raised concerns about holding such a massive sporting event. 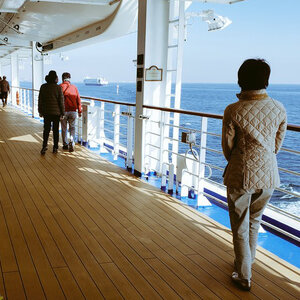 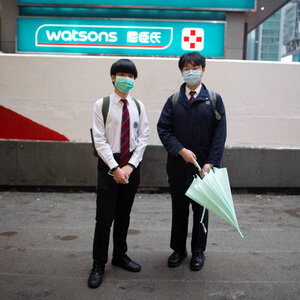 ‘It’s Not Easy For Anyone’: Coronavirus Disrupts Life And Work In Hong Kong

The chief executive of the Tokyo organizing committee, Toshiro Muto, expressed some of these concerns himself, saying he was “seriously worried” that the spread of coronavirus “could throw cold water on the momentum toward the Games.”
But officials with the WHO and the International Olympic Committee are sending a different message. Michael Ryan, executive director of the WHO’s health emergencies program, said that the organization is “very much engaged” with the Olympics planning — but that there has been no specific discussion yet regarding the event.
“Certainly the advice we’re received externally from the WHO is that there’s no case for any contingency plans or canceling the games or moving the games,” said John Coates, the head of an IOC inspection team. 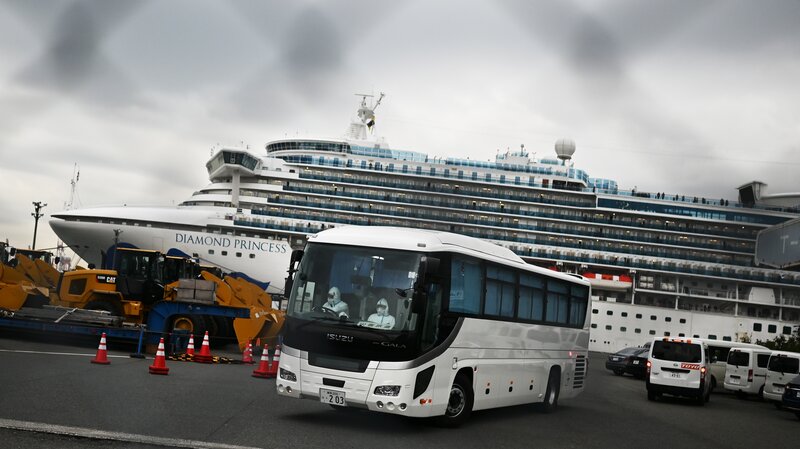 A bus departs from the dock where the Diamond Princess cruise ship sits under quarantine with its thousands of passengers and crew. Japanese authorities said Friday that some older passengers who tested negative for the coronavirus were allowed to disembark.
Charly Triballeau/AFP via Getty Images
About that cruise liner off Japan …
The Japanese health ministry says 11 particularly vulnerable passengers have disembarked the Diamond Princess after a long quarantine period offshore. The ministry says that to do so, they had to meet at least these criteria: They had to be over 80 years old and test negative for the disease.
Thousands of passengers and crew remain under quarantine — and likely will continue to do so until it is expected to lift next week.
Meanwhile, the nearly 1,500 passengers aboard the MS Westerdam, another cruise liner, were finally allowed to disembark in Cambodia on Friday after being turned away by a string of other countries. 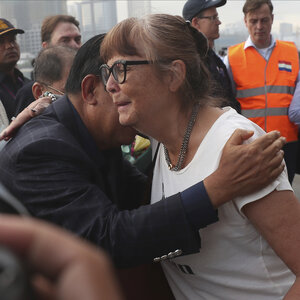 “I wish to thank Cambodia, especially the prime minister [Hun Sen], for demonstrating to the world the meaning of solidarity,” said Tedros, the director-general of the WHO. “I hope that other countries will follow Cambodia’s lead.”
Tally of confirmed cases in the U.S. unchanged
That number remains at 15, while the Centers for Disease Control and Prevention released more detailed information Friday: Of the 443 people under investigation in the U.S., 347 have tested negative and 81 others were awaiting their results.

“But we need to remember it’s a rapidly changing situation, and so we have to prepare in the event that this spreads more fully,” Health and Human Services Secretary Alex Azar tells NPR’s Morning Edition.
“One of the steps that we announced yesterday is we’re working with our flu surveillance network,” he adds. “And in Seattle, San Francisco, LA, New York and Chicago, when individuals present with flu-like symptoms, they will also be tested for the China coronavirus as part of our multilayer surveillance system.”

OUT OF MIND » BREAKING NEWS & HOT TOPICS » COVID-19 » COVID-19: Coronavirus continues its race across the globe